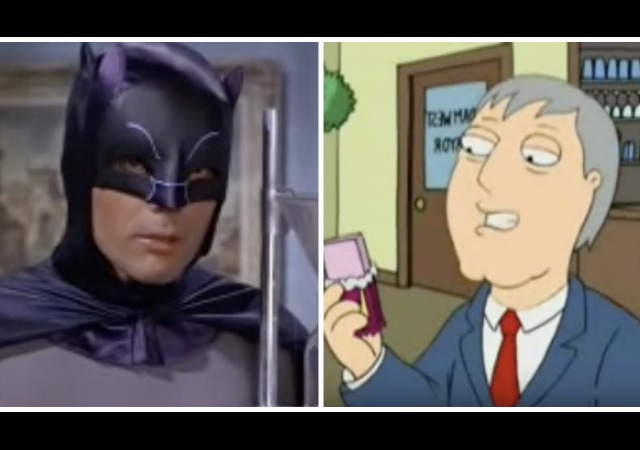 Batman star Adam West passed away at the age of 89 after he battled leukemia. From Vanity Fair:

“Our dad always saw himself as The Bright Knight and aspired to make a positive impact on his fans’ lives. He was and always will be our hero,” his family said in a statement. West died peacefully in his home Friday night after a battle with leukemia, and is survived by his wife Marcelle, six children, five grandchildren and two great-grandchildren.

The Batman producer wanted West to play the superhero “after he appeared as a different kind of caped crusader in a series of commercials for Nestle’s Quik. Vanity Fair continued:

“You can’t play Batman in a serious, square-jawed, straight-ahead way without giving the audience the sense that there’s something behind that mask waiting to get out, that he’s a little crazed, he’s strange,” West later told the Archive of American Television. He and his co-star Burt Ward added a manic, hilarious energy to the Batman and Robin characters on Batman, which ran for three seasons from 1966 to 1968. The show championed such noble causes as drinking milk, eating your vegetables, and always wearing a seatbelt.

West’s career blossomed again as a voice-over actor, especially as the Quahog mayor Adam West in Family Guy. He explained to IGN in 2012 how he got the part:

IGN: Switching things up, let’s talk about Family Guy. How did you get involved in the series?

West: I had done a pilot with Seth [MacFarlane] that he had written for me. It turned out we had the same kind of comic sensibilities, and got along well. When Family Guy came around and Seth became brilliantly successful, he decided to call me and see what I was doing, He asked if I would like to come aboard as the Mayor, and I thought it would be neat to do something sort of absurd and fun.

IGN: Do you have any favorite behind-the-scenes stories regarding Family Guy?

West: No, except they abuse me terribly over there.

IGN: [laughing] They abuse you!?

West: They beat on me in the recording room, screaming “More! More! More!”

IGN: Do they allow input into your own character on Family Guy?

West: Sure! The wonderful thing with some of the things I’ve done – most of them, really – is to be trusted. To be able to do your thing, to work on it, hone it into my gem of creativity!

IGN: Anything fun and exciting coming up regarding Family Guy?

West: Anything with Family Guy is great. I’m hosting the Family Guy Online game, which was a lot of fun. The fans should check it out.

IGN: Do you have a favorite episode of the show, one you’ve been a part of?

West: [laughing] I think any episode that allows me to really run with something absurd or ludicrous, or inventive is great.

This is one of my favorite scenes:

Here’s a mashup of his best clips:

West also had a small part in the hilarious Drop Dead Gorgeous.

One contestant told Kirsten Dunst’s character that at another pageant her roommate slept with West. Unfortunately, I cannot find the clip. The “documentary” crew noted in the scene they couldn’t reach West for a clip. It’s hilarious.

RIP, Adam West. We will miss you!

The real Batman. Quite the character! May he find comfort in the arms of Angels…

I adored him… RIP Batman

one of my favorites
https://www.youtube.com/watch?v=-fxXWzqkSeU

I was in high school when the TV series first aired. The pilot episode was preceded by tons of hype with commercials and other popular media at that time bombarding us with “Batman is coming” The hype surrounding the release of the next latest and greatest iPhone pales in comparison.

I was allowed to take a break from my studies to watch Batman and the original Star Trek TV series. Reruns of both air on the meTV network and they are still as enjoyable to watch as they were 50 some years ago. Ah, memories of ‘rabbit ear’ antenna and a fuzzy picture on a 480i CRT TV screen.

how long will it take for bill whi-nye-r to defile him as a “climate polutter” …. how dare he have a wife, 6 children… 5 grandchildren… and 2 ggchildren…

My childhood “hero.” Memories of running around the neighborhood wearing a bath towel as a cape and trying to slide down the iron support pole in the basement just like my favorite caped crusader :_(

I loved Batman as a kid. There are many fond memories of the kids in the neighborhood playing Batman and Robin.