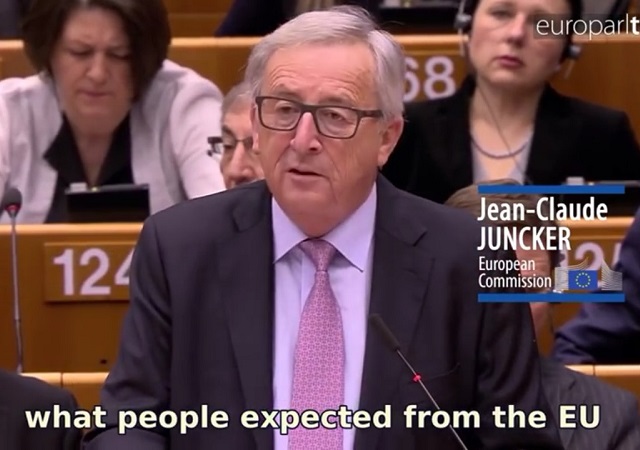 With the Greek debt crisis still unresolved and Brexit yet to be negotiated, European Union is rolling out plans to tie up the remaining 27 member states tighter together. In a policy paper released yesterday, the European Commission, the EU’s political arm, lays out the roadmap for “completing a genuine financial union” by 2025. The 40-page policy paper calls for “further political integration” as well as a banking union,” and a “more integrated Economic and Fiscal Union”. Furthermore, the document calls for a unified “Euro Area Treasury” to be headed by a powerful “EU Finance Minister,” “who would also be Chair of the Eurogroup.”

The EU policy paper does not see the need for any national ratification or referenda over this irreversible political-economic union paraded as “reform” — making it perhaps the biggest ever power garb by an unelected bureaucracy.

Mainstream media in Germany hailed the EU’s proposal to curb European nation-states as a welcome step. “Reform of Eurozone,” cheered the leading German weekly Die Zeit. “European Commission demands the deepening of monetary union: all EU countries should join. The larger modification will start after the European [Parliament] Election [set for 2019] and Brexit.”

The left-wing German newspaper TAZ was unhappy with the scope of the proposed power grab by Brussels-based Eurocrats and begrudgingly called them “modest reformers” in its headline, complaining “Brussels tries tip-toeing.”

Even before the EU policy proposal was made public, the German magazine Focus  hinted that Chancellor Merkel had been the driving force behind the latest push for the “deeper union” all along. “Merkel wants to reform the economic- and monetary union and now has a strong ally [in France’s President Macron],” the current affairs magazine reported last week.

The German broadcaster Deutschlandfunk reported Berlin’s reaction to the EU’s ambitious plan, hinting that despite feigning differences out of domestic compulsions: German Chancellor Merkel, French President Macron, and President of European Commission Jean-Claude Juncker were perhaps singing from the same hymn sheet after all:

The cry of outrage over the European Commission’s working paper on the future development of Economic- and Monetary Union was missing today. Even when the document somewhat clearly referred to the possible creation of a common debt instrument — something considered very terrible in Germany. Even the European Christian-Democrats were surprisingly moderate [in their reaction]: the 40-page paper was even explicitly welcomed.

The European Commission presented its ideas for protecting the Euro on Wednesday. They are similar to the ten points presented by the new French President Emmanuel Macron — not to the collective joy of the German government.

“The Euro is already a symbol of the unity and guaranty of stability for the Europeans. We must ensure that it also brings prosperity to all,” said French-origin EU-Monetary Commissioner Pierre Moscovici Wednesday. The agency will push for multiple and mutually coordinate reforms. [Author’s translation]

Despite EU commissioner Moscovici’s assurances of using Euro and Monetary Union to bring “prosperity to all,” these have been the very source of misery for southern Europe. The youth unemployment in Greece, Spain, and Italy ranges between 40 and 50 percent. Despite two huge rescue packages totalling over € 215 billion and a third under way, Greek economy is staring at the abyss — just as it did seven years ago. Merkel, Macron, and the rest of the European political elite can’t seem to see the devastation these failed EU policies have left behind across the continent.

EU’s unwillingness to secure Europe’s outer borders and eagerness to import millions of migrants from Muslim-majority North African and Arab countries, not only compounds to the current economic and social crisis, but lays the ground for conflicts of the future. Instead of cracking down on people smuggling, European coast guard ships under EU directives are ferrying migrants when they should be stopping them.

It is nothing short of a divine providence that Britain was able to cut itself loose from the Merkel-run “European Project” just in time. With France and Germany in charge of the clown car now, and hitting the accelerator when they should be hitting of the brakes, time may be running out for free nations of Europe.

They are also facing a Demographic Crisis, a Banking Crisis, an Energy Crisis and a Financial Crisis.

Northern Europe has bankrupted Southern Europe and now there are not enough Euros to bail them out.

Seems a bit like the crew of a sinking ship tying themselves together, so they all have to go down with the ship.

“. . . hinted that Chancellor Merkel had been the driving force behind the latest push for the ‘deeper union’ all along.”

Old habits die hard, if they die at all.

Deutschland über alles. That’s for sure! With the emphasis on the “über” part.

This Merkel plan has all the earmarks of being Germany’s 2017 version of the Good Times of the 1930s of annexing: the Saar region, the Rhineland, Austria, Czechoslovakia’s Sudenland, followed by the rest of Czechoslovakia, then the Protectorate of Bohemia and Moravia, then the Lithuanian Memel region.

Poland was next. At that point even GB, the wimpy GB, couldn’t avert its eyes any longer.

The EU has always been an attempt to create the Fourth Reich without the messiness and bother of having to go through all that conquest part. Just tell everyone else in Europe that they should surrender their sovereignty and let Germany run things, because the Germans are racially superior ubermensch, or something.

Yeah, sure, they’ll all go for that.

It’s Vice, so take with a grain of salt. Apparently an increasing number of Greek youth are abandoning the city for a subsistence living on crofts. They barter chickens and whatnot for the bare minimum needed to live. This would be the first time I’ve ever heard of a nation regressing back to prior to the Industrial Revolution.

notamemberofanyorganizedpolicital in reply to rdmdawg. | June 1, 2017 at 1:52 pm

They have carbon reduction goals that no industrialized society could meet.

Chancellor Merkel Seems hell bent on completing the unification of Europe, much as previous infamous Germans have tried, minus the concentration camps.

Oh, I’m sure they’re coming. Probably introduced in a different format, but camps for the non-believers and heretics are coming.

The “camps” will be everywhere but Brussels.

The millennia old dream of a continental European empire. Hundreds of millions of “eggs” have been broken in trying to make that dream omelette exist.

1) The Anschluss is supposed to be completed by 2025. The problem is by that time the Caliphate will be the governing body of Western Europe.

2) It is supposed to be done with no input from the member states. How do you think the members of the Former Warsaw Pact, who have experienced such tyranny in living memory are going to react to that? Kinetically, I would assume.