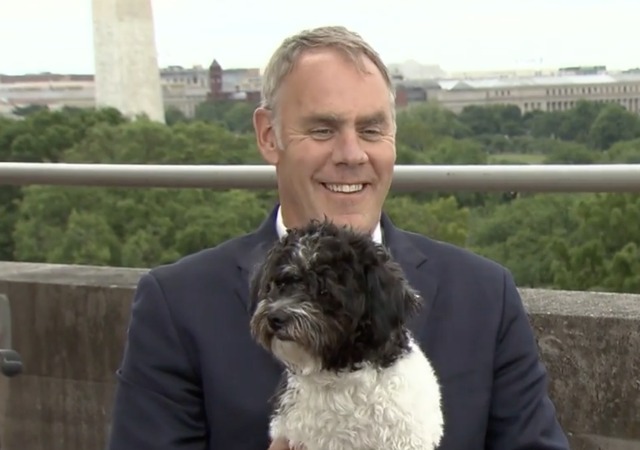 It’s really hard not to like Interior Secretary Ryan Zinke. On Friday, he hosted the first “Doggy Day,” which he hopes will become a regular thing. After all, Zinke likes to bring his dog Ragnar to the office as often as possible. The Hill reported:

“It does improve morale among a lot of people,” said Zinke, who rode a United States Park Police horse to the building on his first day of work after Senate confirmation.

“The other thing is, we have to compete for our people. Up front, I want the best people at Interior, and young millennials, they view life and the working environment to be super important, and I want to reflect that a little,” he said.

Zinke can bring his dog to the office and he wants his employees to have the same ability. From CBS News:

Secretary Zinke’s dog, Ragnar, is already no stranger to his office. “Ragnar is our ambassador to happiness at the Department of Interior,” Zinke said.

The former Navy Seal commander turned congressman says Ragnar is allowed to join him at work, and he wants the employees at his department to have the same benefit. “Even if you’re having a bad day, Ragnar is really good at making the day just a little bit better.”

As you can tell, the Interior Department employees enjoyed the day. From CBS News:

Megan Bloomgren was thrilled to bring her dog Daisy with her to work. “There’s definitely a buzz around the department. It’s pretty exciting to be able to have your dog at work.”

Interior locations across the country received permission to participate as well. Zinke will hold another doggy day, but has not announced the date. Other animals may come for the next time, too.

This place has totally gone to the dogs! @SecretaryZinke & his pup Ragnar at @Interior #doggydays. pic.twitter.com/v4Sw6Cd03G

The first of our four legged friends are here for #DoggyDay at @Interior pic.twitter.com/d1j4e68o47

Nothing brings people together like #DoggieDay. I got to meet 80+ @Interior employees and dogs today. pic.twitter.com/kbwE0du2z5

Ziggy the puppy was a big hit at #DoggyDay @Interior. @RyanZinke invited employees to bring dogs to work to improve morale in the office. pic.twitter.com/K2oZvwRywH

.@SecretaryZinke makes nice with the watchdog’s watchdog (he’s posing for a photo op with the @doioig leader and their pups on #DoggyDay) pic.twitter.com/PWGueZBEYu

I’d call in on ferret day, but doggie day would be a hoot.

I don’t know … bringing his horse in to work (and declaring it a Senator) didn’t exactly make Caligula the most cuddly of the early Roman emperors.

Ragnar was a legendary Viking hero, and the lead in a TV show older than the dog.

Is there nothing more important to worry about at the Dept. of the Interior than doggie days?