WWII Ended in Europe 72 Years Ago

WWII Ended in Europe 72 Years Ago

Surrender further brought to light the true evil of the Nazi regime. 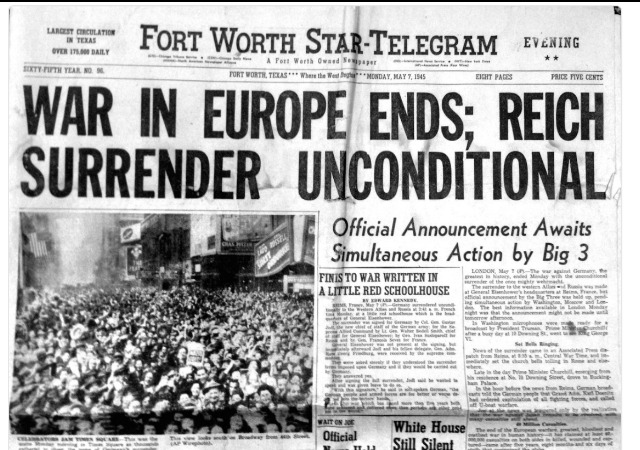 On May 8, 1945, the German army collapsed around Europe after Adolf Hitler’s successor Karl Dönitz officially surrendered to the Allies. This date has become known as Victory Day in Europe, aka VE Day, to mark the end of World War II on the continent.

At first, the German High Command led by General Alfred Jodl only wanted to surrender to the Western Allies. General Dwight D. Eisenhower demanded the Germans surrender on both fronts. Dönitz told Jodl to comply. British Prime Minister Winston Churchill announced the surrender on May 8:

Yesterday morning, at 2.41, at General Eisenhower’s headquarters, General Jodl, the representative of the German High Command and of Grand Admiral Doenitz, the designated head of the German State, signed the act of unconditional surrender of all German land, sea and air forces in Europe to the Allied Expeditionary Force, and, simultaneously, to the Soviet High Command. General Bedell Smith, who is the Chief of the Staff to the Allied Expeditionary Force-and not, as I stated in a slip just now, Chief of the Staff to the United States Army-and General François Sevez, signed the document on behalf of the Supreme Commander of the Allied Expeditionary Force, and General Susloparoff signed on behalf of the Russian High Command.

To-day this agreement will be ratified and confirmed at Berlin, where Air Chief Marshal Tedder, Deputy Supreme Commander of the Allied Expeditionary Force, and General de Lattre de Tassigny, representing the French Republic, will sign on behalf of General Eisenhower, and General Zhukov will sign on behalf of the Soviet High Command. The German representatives will be Field Marshal Keitel, Chief of the-High Command, and the Commanders-in-Chief of the German Army, Navy, and Air forces.

Hostilities will end officially at one minute after midnight to-night, Tuesday, 8th May, but in the interests of saving lives the “Cease Fire” began yesterday to be sounded all along the fronts, and I should not forget to mention that our dear Channel Islands, the only part of His Majesty’s Dominions that has been in the hands of the German foe, are also to be freed to-day. The Germans are still in places resisting Russian troops, but should they continue to do so after midnight, they will, of course, deprive themselves of the protection of the laws of war and will be attacked from all quarters by the Allied troops. It is not surprising that on such long fronts and in the existing disorder of the enemy that the orders of the German High Command should not in every case have been obeyed. This does not, in our opinion, constitute any reason for withholding from the nation the facts communicated to us by General Eisenhower of the unconditional surrender already signed at Rheims, nor should it prevent us from celebrating to-day, and to-morrow-Wednesday-as Victory-in-Europe Days, and I think that to-morrow it may be specially desirable for us to emphasise the debt we owe to our Soviet Ally, whose main celebrations will be taking place to-morrow.

One by one, German forces in Europe put down their arms. From The History Channel:

In Prague, Germans surrendered to their Soviet antagonists, after the latter had lost more than 8,000 soldiers, and the Germans considerably more; in Copenhagen and Oslo; at Karlshorst, near Berlin; in northern Latvia; on the Channel Island of Sark—the German surrender was realized in a final cease-fire. More surrender documents were signed in Berlin and in eastern Germany.

The main concern of many German soldiers was to elude the grasp of Soviet forces, to keep from being taken prisoner. About 1 million Germans attempted a mass exodus to the West when the fighting in Czechoslovakia ended, but were stopped by the Russians and taken captive. The Russians took approximately 2 million prisoners in the period just before and after the German surrender.

Meanwhile, more than 13,000 British POWs were released and sent back to Great Britain.

72 years ago, WWII in Europe ended. The American people will always honor those who vanquished the evil of Nazi Germany. #VEDay pic.twitter.com/WlTMwfeW3D

On this day in 1945, Germany surrenders to the Allies marking the end of WW2 in Europe. Happy VE Day. pic.twitter.com/ziuJigXEy7

#OTD, 8 May 1945, Nazi Germany surrendered to the allied forces, signifying the end of World War II in Europe. #VEDay pic.twitter.com/vPhFvMOf5S

#OTD in 1945, Canada and the world celebrated Victory in Europe and the end of WWII in #Europe #Canada150 #veday pic.twitter.com/0MjMLIbpHg

The Top-Secret message to Eisenhower that the war in Europe was over,”The mission of this Allied force was fulfilled…” #VEDay pic.twitter.com/OrALA3wXNx

As the Allies marched through the liberated lands, they came across one of the worst violations of human rights in the history of mankind: death camps. The Allies finally saw the full extent of the Holocaust and Hitler’s evil plans to liquidate the world of Jews and those he felt inferior to the human race.

Quite a few of these liberations occurred before the formal surrender, but considering the impact, it’s just to mention them in this blog. For instance, the Bergen-Belsen camp. From the BBC:

As they explored No.1 Camp, the liberators encountered scenes reminiscent of Dante’s Inferno – a living example of hell on earth. They discovered 20,000 emaciated naked corpses lying unburied on the open ground or in the barrack blocks. Some inmates had literally starved to death where they lay, too weak even to drag their wasted bodies away from the typhus-infested corpses that surrounded them.

British troops recalled that the combination of the sickly-sweet stench of rotting human flesh, and the nauseous reek of human excrement was so overwhelming that it could be detected up to three miles beyond the camp walls. The camp had been without water for six days, after Allied bombing had broken its pump, although the guards had not attempted to gather water from a nearby creek.

The liberators also encountered around 50,000 ‘survivors’. With ribs protruding through taut dry skin, bellies distended, these shaven-headed ‘living skeletons’ lay or sat in their own filth on the open ground or in the tiered bunks of the camp’s barrack blocks. Some were too weak even to respond to the British troops, and stared into the distance with bulging, glazed eyes.

Indeed, the liberators found it very difficult to discern the all-but dead from those actually deceased. Those inmates who were still just able to move, painfully crawled across the muddy ground on all fours, driven by the desperation of hunger and thirst to seek out what food or moisture they could find among the corpse-littered ground.

This Started in February 1945

Unfortunately, not everyone in Europe could celebrate the end of the war due to the agreements made between Churchill, former U.S. President Franklin D. Roosevelt, and USSR leader Josef Stalin at the Yalta Conference in February 1945. The West railed against former British Prime Minister Neville Chamberlain over the Molotov-Ribbentrop Pact between Germany and Russia that divided Estonia, Finland, Latvia, Lithuania, Poland, and Romania between the two countries.

Yet at the Yalta Conference, Roosevelt and Churchill allowed Stalin to keep these countries he annexed under the pact. I reported at Breitbart:

Churchill alleged that Hitler deceived Neville Chamberlain but that Stalin would not deceive him. But it did not take long before both leaders realized Stalin was no different from Hitler. Poland felt betrayed by the Allies, especially since a puppet Communist government was implemented in the country. The first election in Poland was false and voted to allow the Soviet Union to be in control of Polish affairs. This puppet government agreed to the Soviet annexation of the eastern territory and allowed the Red Army on Polish lands. Therefore, Poland was not officially a member of the USSR, but a satellite state.

Stalin also kept Czechoslovakia, Hungary, and Bulgaria. As The History Channel points out, the actions at the Yalta Conference foreshadows The Cold War, which did not end until 1990.

May 8 is a great day, but do not forget that not everyone in Europe celebrated today since they remained under the iron fist of the USSR.

And yesterday France surrendered to Germany

The Fourth Reich (a.k.a the European Union) will not last 1000 years, and may not last 50. And this might be a very good thing indeed, but its fall might precipitate a coming dark age that it may last 1000 years. It’s all about demographics – which determines destiny.

That was just a transitional surrender, en-route to the final surrender to the Caliphate.

The Russians always make a great show every 9 May of celebrating victory in the Great Patriotic War, as they call it. They have large military parades and displays, and it was the same under the USSR as it is today.

But, I wish someone​ would ask Russian diplomats, politicians, journalists…whatever…why they don’t have great large and extravagant military victory parades every 8 October.

8 October 1939 was, of course, the date Polish military resistance in Poland was finally ended. Until the Soviet stab in the back the Poles had been stabilizing their defence against the Germans. Whether or not they could have succeeded will never be known, but for sure the Russians delivered Germany a much quicker win.

So why doesn’t Russia celebrate that? Just asking.

As John Foster Dulles pointed out, “if we’d had one more smart person at Yalta, we’d have given France and England to the Soviets, too.”

Though to be fair, the USSR basically retained the territory already overrun—at considerable expense—by the Red Army. The US held part of Czechoslovakia which it gave up, the USSR gave up sole possession of Berlin and some territory in the Far East (which had nothing to do with Germany). The western allies managed to keep Stalin out of Italy, Greece, and Japan, even though Molotov tried to be annoyingly legalistic about it all.

Thanks for posting this Mary. We need to remember.

Now Germany is busy conquering Europe for Islam instead of for Hitler.