No replacement named yet 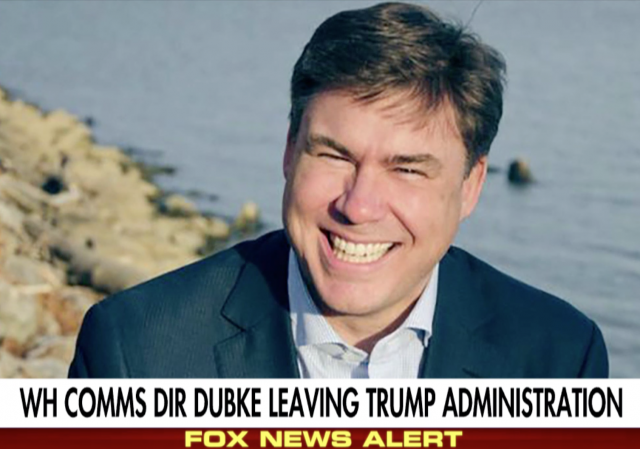 White House Communications Director Mike Dubke’s resignation was made public Tuesday. Dubke resigned May 18, but agreed to work through the President’s first trip abroad. He’s said to be leaving on good terms.

Asked about reports announcing his exit, Dubke told Fox News, “It is true.”

He added: “It has been a privilege to serve this president.”

Dubke said in a message to friends and associates that his reason for leaving the post was “personal.”

“The reasons for my departure are personal, but it has been my great honor to serve President Trump and this administration,” Dubke wrote. “It has also been my distinct pleasure to work side-by-side, day-by-day with the staff of the communications and press departments. This White House is filled with some of the finest and hardest working men and women in the American Government.”

White House chief of staff Reince Priebus in a statement thanked Dubke “for his service to President Trump and this administration.”

“Mike will assist with the transition and be a strong advocate for the President and the President’s policies moving forward,” Priebus said.

“There’s been a story a minute about that,” she said. “It’s easier to cover that than I guess learning the finer points about healthcare reform, tax reform, infrastructure, ISIS in retreat…In terms of ‘staff shakeups,’ I always read things that simply aren’t true.”

Dubke only took the communications director job in February, helping relieve White House Press Secretary Sean Spicer, who had initially shouldered the dual burden of crafting the administration’s message and delivering that message at press briefings.

Beltway gossip speculates former Trump campaign manager, Corey Lewandowski may replace Dubke, but rumors have not been confirmed. Even if a nosey tipster spotted him in D.C. close to the WH, via Politico:

SPOTTED — COREY LEWANDOWSKI on Memorial Day at Peet’s Coffee across from the White House, “suitcase in hand,” per our tipster.