This is CNN: Trump Gets More Ice Cream Than Others

This is CNN: Trump Gets More Ice Cream Than Others 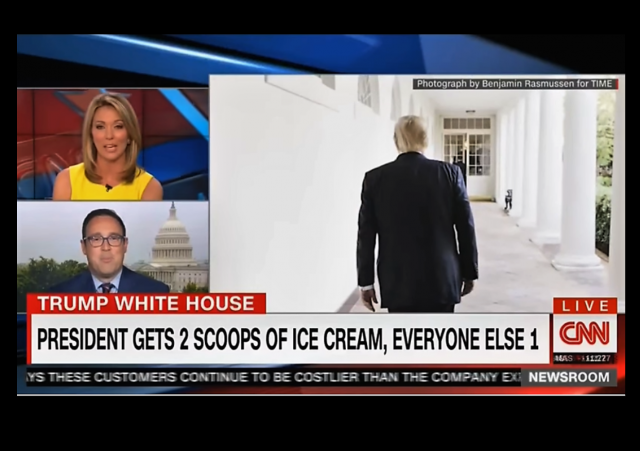 The media seems to “jump the shark” on Trump at least once a week. The newest example comes from CNN which wants you to know President Trump gets two scoops of ice cream while other people get only one.

This is a real report from CNN:

Trump gets 2 scoops of ice cream, everyone else gets 1 — and other top lines from his Time interview

According to an extensive interview with TIME Magazine, Trump’s White House staff has settled into Trump’s routine and know his desires, sometimes before he does.

For example: Trump takes two scoops of ice cream with his chocolate cream pie, TIME reported, while everyone else around the table gets just one.

In the interview published Thursday, Trump also expanded on his view of Russian hacking during the 2016 election, refuted reports that he is unhappy with his current national security adviser and took a level of blame for his combative administration.

This was even reported on the air:

Bre Payton of The Federalist has the right reaction to this:

This One Screenshot Captures Everything Wrong With Media Coverage Of Trump

“PRESIDENT GETS 2 SCOOPS OF ICE CREAM, EVERYONE ELSE 1,” the chyron reads.

This brings me to the obvious question: WHO CARES? Who cares if the president’s waitstaff are able to anticipate his preferences and have a Diet Coke or a second scoop of ice cream ready? That’s called good customer service! The White House waitstaff serve Trump nearly every day, so of course they know what kind of dressing he likes on his salad or what his beverage of choice is. And why are we all assuming that the other dinner guests couldn’t just ask for another scoop of ice cream if they wanted it? I have a hard time imagining the White House kitchen staff denying someone more dessert.

Brian Maloney of the Media Equalizer asks the obvious question:

CNN ‘scoop’: More ice cream for Trump than others

Is this why voters have lost faith in the American news media?

In what some are now calling “Ice Cream-gate”, CNN’s coverage of Donald Trump’s interview with Time Magazine highlights an apparent “scoop”: the president is said to receive extra ice cream with his chocolate cream pie.

It sure is a good thing Trump doesn’t drink. Can you imagine the headlines?

And we’re only five months in…

Can you even imagine how bad it’s going to get before the mid-term elections next November?

notamemberofanyorganizedpolicital in reply to clintack. | May 15, 2017 at 3:22 pm

The others couldn’t even think of that.

Ask and ye shall receive.

Two scoops? Oh by all means IMPEACH HIM!

For eight years Barack and Michele got more of everything than the rest of us – can you imagine how many CNN headlines there could have been if they treated Obama the same way as they treat our President?

According to U.S. school children: “Obama ate my lunch!”

Who would we have to write to get airports to switch from
CNN to Fox News?

Answering my own question, it turns out that CNN pays airports to blare their leftist crap to the captive audience. Also, the programming you see in airports is not the same as you see on cable; It has been sanitized of foul language and anything reflecting badly on the airlines. CNN may have actually paid for the installation of the TV sets, but I haven’t been able to verify that. See: Byko: The story you will never see on airport TV . So unless Fox News (or some other outfit) decides to create their own special airport network and underbid CNN for the rights, passengers are stuck with fake news.

notamemberofanyorganizedpolicital in reply to snopercod. | May 15, 2017 at 3:27 pm

Remember also according to many, CNN is subsidized by the FEDs and is a CIA/State Dept. tool………

And…add…and…Trump got chocolate ice cream and everybody else only got vanilla! How unfair!!!

If Trump got vanilla, that would be rayciss or sexist or “homophobic” or something….

notamemberofanyorganizedpolicital in reply to nordic_prince. | May 15, 2017 at 3:29 pm

We have always suspected Trump was heartless but this, this is beyond the boundaries of humane treatment. Way beyond.

Is he also accused of having a duplicate key to the icebox so he can sneak an extra helping of strawberries at night when no one is looking?

But they proved through geometric logic that the collusion with Russian did exist.

Two scoops mitigates the effect of Catastrophic Anthropogenic Global Warming through addition of an insulating layer. The outer layer melts while the inner lay remains cold and firm. This was forward thinking.

As for everyone else getting one scoop, not everyone will enjoy a beachfront estate in Hawaii… paradise. Most of us will have to settle for one scoop and less with progressive returns.

Ok, everybody gets two scoops… Many people, for whatever reason only really want one, waistline, sugar, dairy, who knows?… Many, many scoops remain uneaten, Trump and his staff are reported for wanton waste of taxpayer ice cream. Either way, MSM creates headlines against President Trump.

What taxpayer ice cream? Where on earth did you get the idea that the taxpayer pays for this? Unless this is some official function, Trump is paying for that ice cream out of his own pocket, just as he pays for all the private living expenses of himself, his family, and his guests at the White House — and just as 0bama did. The only thing a president gets for free is the house.

Aren’t we fortunate to be living at a time when the MSM have the courage and tenacity to perform intrepid reporting such as this. We can now sleep safely at night knowing that the media are on top of these vitally important situations that threaten the very fabric of society.

It’s his ice cream, he pays for it out of his own pocket, so how is it anyone’s business how much he has?

Congress should pass a Joint Resolution:

Be it resolved, that the President of the United States may have two scoops of ice cream. And he need not eat his Brussels sprouts.