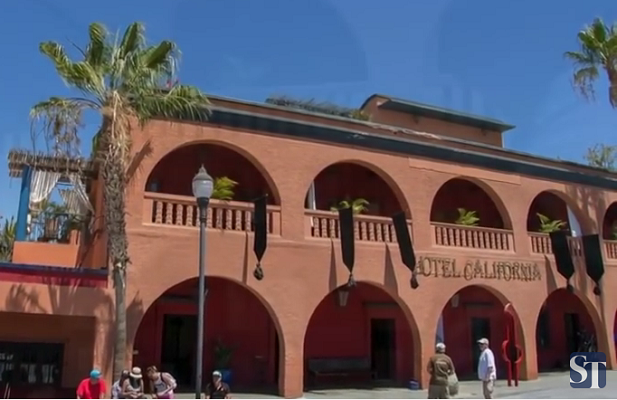 It appears as if the proprietors of one Mexican hotel are about to experience a legal case for trademark infringement.

It’s not located on a dark desert highway, and guests are presumably allowed to leave, but the Eagles still feel that a real-life Hotel California is ripping off their biggest hit.

The band filed a lawsuit against the Mexican hotel this week, accusing the owners of encouraging guests to believe that it’s associated with the band, Reuters reports.

According to the lawsuit, the hotel pumps “Hotel California” and other hits through its sound system, as well as sells merchandise describing itself as “legendary.”

The Eagles assert that the establishment has misled guests into believing it’s associated with or even served as the inspiration for their song “Hotel California.”  The band says this claim is untrue.

The hotel website indicates that hotel was founded in 1947 by a Chinese immigrant named Mr. Wong. 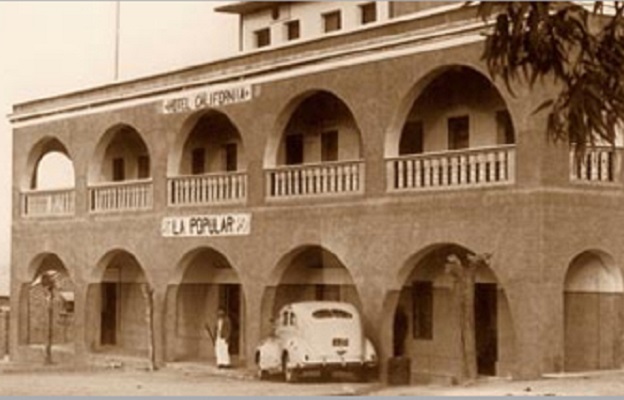 The hotel’s website offers this overview of hotel history circa 1970:

…During the 1960s and 1970s, the precise details of the hotel’s history are a bit “hazy” – not uncommon for the culture of that particular era in general… There are numerous stories. Whether fact or myth, nobody knows for sure. However, one rumor, fabricated in the 1990’s by someone with no connection to any owners of the hotel, states that the Eagles once owned it. This is unequivocally false.

Many of the other legends are less black and white and continue to fascinate the public. Although the present owners of the hotel do not have any affiliation with the Eagles, nor do they promote any association, many visitors are mesmerized by the “coincidences” between the lyrics of the hit song and the physicality of the hotel and its surroundings.

The most recent owners are John and Debbie Stewart, who purchased the hotel in 2011 and allegedly altered the establishment’s marketing approach to take advantage of the famous rock anthem.

…According to the band’s representative, it was the Stewarts who began using the original name to market the hotel.

The lawsuit filed before a Los Angeles federal court claims the hotel owners piped Hotel California and other Eagles tunes through their sound system and sold t-shirts that called the hotel “legendary,” encouraging guests to believe the hotel was associated with the band and creating confusion as a result.

The lawsuit also stated that the hotel owners and their company, Hotel California Baja LLC, had filed an application before the U.S. Patent and Trademark Office to register the Hotel California name.

The band is seeking compensation for damages and a halt to the unapproved use of its intellectual property.

Won’t the Raid Roach Motel people have grounds for a lawsuit against The Eagles then?

Did Ellen DeGeneres have a honeymoon trip there once?

So, the new owners want to slap a name that has not been on that old hotel for decades, in an effort to make use of a band’s intellectual property in its advertising?

Hotel California predated the Eagles. I don’t see them suing Winslow, Arizona. Suck it up and live off your royalty’s and stop acting the fool.

True, but there were also McDonald’s Restaurants in California before Ray Kroc – but he trademarked the name first. And won every suit brought over the name.

actually Kroc bought the use of the name from the McDonald’s brothers as well as the right to franchise the name.

“Kroc suggested they franchise their restaurants throughout the country. The brothers were skeptical, however, that the self-service approach could succeed in colder, rainier climates; furthermore, their thriving business in San Bernardino, and franchises already operating or planned, made them reluctant to risk a national venture.[1] Kroc offered to take the major responsibility for setting up the new franchises elsewhere. He returned to his home outside of Chicago with rights to set up McDonald’s restaurants throughout the country, except in a handful of territories in California and Arizona already licensed by the McDonald brothers.”
https://en.wikipedia.org/wiki/History_of_McDonald%27s

Eagles were the opening act for Jethro Tull on a ’69 tour. At the time, Tull’s big finish/guitar solo by Martin Barre was a medley of “We Used to Know” & “For A Thousand Mothers.” The guitar parts on the later “Hotel California” match Barre on “We Used To Know” rather closely.

Tull founder Ian Anderson laughed about it, noting “There are only so many chords to play” but of course it was Barre’s creative work that was mirrored. Just a reminder things aren’t always simple – & that copyrights don’t always mean trademarks, either.

Am I strange in that my preference would be to avoid a place that willingly associates with the phrase “you can check out, but you can never leave”?

Welcome to the “Hotel California” where you can “Take It Easy” or “Chug All Night” watching a “Witchy Woman” “Tryin” to “Take The Devil” on a “Train That Leaves Here This Morning” on an “Earlybird”, “Nightingale” cruise that will leave him with a “Peaceful Easy Feeling”.

Rolf I think you will enjoy this then.

“Meredith Willson appears on Garry Moore’s “I’ve Got A Secret” (March 25, 1963) and conducts a chorus of people chosen from the New York phone books whose names spell out the words to a popular song.”

Perhaps the Philadelphia Eagles should sue the band for ripping off their name.

I suppose the Eagles’ legal fees are deductible expenses in the music biz, so the lawyers will come out all right – but I also believe that a ‘chinga tu madre’ defense by the hotel will fend off the prosperity-by-association complaint pretty well.