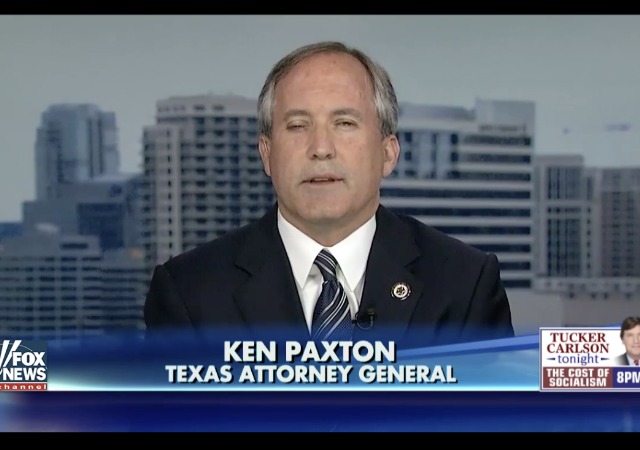 On Sunday, Texas Governor Greg Abbott signed a bill to ban sanctuary cities in the state. The law “also requires police chiefs and sheriffs — under the threat of jail and removal of office — to comply with federal requests to hold criminal suspects for possible deportation.”

Today, Texas Attorney General Ken Paxton has filed a “lawsuit in [the] U.S. District Court for the Western District of Texas” that “names Travis County, the city of Austin and several local officials as defendants.” Paxton wants “the court to uphold the constitutionality of the new law” and hopes it will help “avoid a multiplicity of suits in various forms.”

“SB 4 guarantees cooperation among federal, state and local law enforcement to protect Texans,” Attorney General Ken Paxton said in a statement Monday. “Unfortunately, some municipalities and law enforcement agencies are unwilling to cooperate with the federal government and claim that SB 4 is unconstitutional.”

The attorney general says the lawsuit demonstrates the law is valid under the Fourth and Fourteenth Amendments to the U.S. Constitution.

“Governments throughout Texas have a clear duty to continue holding undocumented and suspected criminal aliens pursuant to ICE detainers,” Paxton said. “This is a public safety issue that requires swift resolution. If a Texas sheriff or other law enforcement authority cannot lawfully honor an ICE detainer, dangerous people will slip through the cracks of the justice system and back into our communities. As a nation of laws, it is imperative that SB 4 is fully honored in Texas.”

The lawsuit includes Travis County Sheriff Sally Hernandez, who received warnings from Abbott back in January when she decided not to “honor Immigration & Customs Enforcement (ICE) detainers – which hold illegal aliens in jail until ICE agents can take them into federal custody – unless they are accused of capital murder, aggravated sexual assault or ‘continuous smuggling of persons.'”

Hernandez has had a change of heart. From KXAN:

Hernandez said last week that she would follow the ban if it were signed into law. “While I hate seeing a state law like this come to pass, I have always followed the law and that will not change,” she said.

“I think when the Texas Attorney General is suing you, you are doing something right and I think that we have often said that Austin is a welcoming city and we often said we disagree with SB4 and its intent,” Council Member Delia Garza who represents district 2 says.

She says their fight is just beginning.

The city of Austin also released a statement on Paxton’s lawsuit. From KVUE:

“We are aware of the lawsuit filed by Ken Paxton regarding Senate Bill 4. The City of Austin has been opposed to this legislation from its beginning. Our law enforcement professionals have told us this legislation will make our community less safe by degrading the relationship between our residents and the police who protect them.

The Law Department will defend the protected speech of our Mayor, City Council members, and City Manager who have been personally named in this lawsuit.”

Hard to have a conversation when the left has redifined what words mean.

People who come here illegally are not “immigrants ” Nor are those who came here legally on visas.

‘Hispanic’ is not a consideration regarding those parameters.

All so very true. I had a heck of a time trying to explain the term “hispanic” to my Peruvian wife.

Wrong. Anyone who moves their domicile to a new country, whether legally or not, is by definition an immigrant to that country. No legislature or court in the world has the power to change that.

Going Directly to US courts and skipping the State Courts altogether.

I hope they’re doing this to preempt someone shopping for a judge in California or Hawaii to issue one of their patented baseless TROs.

Anything outside the 5th circuit would have jurisdictional issues, as Texas is outside their territory.

Jurisdiction doesn’t seem to be a problem when district court judges make pro-illegal-immigration rulings that purport to be valid outside their district.

Why do people that Hispanics are the only illegal aliens? There was a report after a raid that had many different countries listed. I was surprised that there was even a New Zealand citizen listed.

I do believe that a pre-emptive lawsuit by the Texas AG will nix out Hawaii, Washington, Maryland, et al from the judge shopping market.

Hispanics…and Mexicans in particular…were part of the fabric of this state from its inception as a republic. Were, in fact, leaders in the fight against the tyranny of Santa Anna during the Texas War Of Independence.

We love that about our state. See Sequin, Juan.

The very fact that an entire major political party would want criminal illegal invaders walking around freely among us is baffling. It’s like we’re living in bizarro world.

But do you see how they’ve shifted the narrative? We don’t even fight about detaining illegal aliens, they’re small fries. We now hardly even have the resources, political will power and argument to round up criminal illegals, let alone all illegals.

I believe that the reason for the lawsuit, is to get a ruling that requiring cities and counties to honor ICE detainers is constitutional and that honoring such detainment orders, by local jurisdictions, is not a violation of the 4th and 5th amendment nor separation of powers. As west coast courts have ruled that detention for federal law violations is not with the power of local jurisdictions, unless an arrest warrant or writ of habeas corpus exist, finding the Texas law constitutional would force Texas jurisdictions to abide by it, until an appeals court rules otherwise.

I see that Austin Texas is still using the largely false claim that notification of federal authorities of violations of federal laws will somehow make a community less safe. This is total BS. In the first place, it would only affect the interaction between the illegal immigrant community [criminals] and local LE. And, even in Austin, the illegal immigrant population is a small minority. Also, it can be expected to become smaller, if the city, or other jurisdiction, stops protecting its members from deportation. So, this argument is ridiculous. This argument annoys me almost as much as the argument that deporting illegal immigrant parents will separate them from their children. This is simply more BS. There is nothing keeping the deported parents from taking their children with them and spouses in this country legally are free to follow their spouse to his or her country of origin.

She’s talking about “criminals” and “Hispanics” as if those two are synonyms.

What a filthy pig.

I don’t understand this at all.

2. How can he sue in federal court over a state law? Surely he’d have to sue in state court, and wait for them to raise the federal issue.

3. The story says he wants a preemptive ruling that the law is constitutional — isn’t that the very definition of an advisory opinion, which courts cannot give?

Well, I’ve got at least a partial answer. The suit is being brought under the Declaratory Judgment Act, which allows “any interested party” to seek a declaration of its “rights and other legal relations”, so long as there is “a case of actual controversy” within the court’s jurisdiction.

Since Texas intends to enforce this law as soon as it comes into effect, it will be an interested party in any controversy that may arise over the law’s validity. Thus, provided the controversy already exists, the declaration it seeks would not be an advisory opinion, and it needn’t wait to be sued.

That answers my 2nd and 3rd questions. I still question, however, how a controversy can exist before a city has violated the law, which isn’t possible until September.