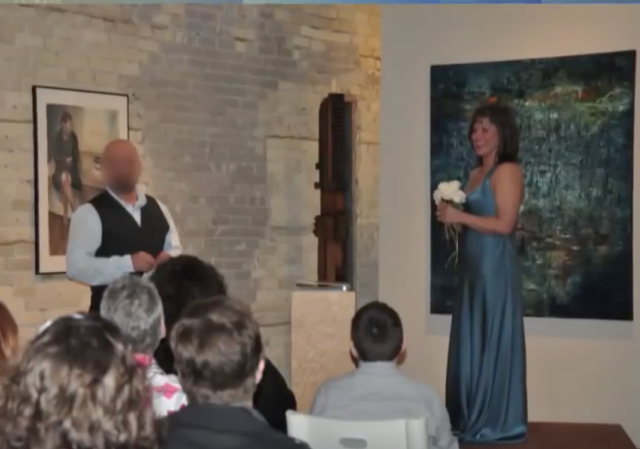 The height of selfish, self-involved society is upon us. Forget marriage, children, and the growth these relationships bring, ‘sologamists’ are marrying themselves.

Sologamy, or marrying one’s self, isn’t illegal, but it’s also not recognized as a legal union in any state.

Sologamists like Erika Anderson of Brooklyn describes her decision to marry herself as “women saying yes to themselves.”

“I would describe it as women saying yes to themselves,” Anderson said. “It means that we are enough, even if we are not partnered with someone else.”

In many ways, the 37-year-old bride looked like any other on her wedding day. She wore a white dress and had a bouquet. Anderson looked stunning with the Brooklyn bridge and New York City skyline behind her.

Except when she walked down the aisle, no one was waiting for her. That’s just the way she wanted it.

Anderson married herself to celebrate independence and believes others should, too.
“You’re worth it!” Anderson exclaimed.

Anderson just celebrated her one-year anniversary with a solo trip to Mexico. She said even though she’s married to herself, she’s dating and open to marrying another person.

“She’s dating and open to marrying another person.” Then why get married at all?

Nadine explains why she married herself:

Increased self-involvement, detachment from community, and neo-feminist culture are all mitigating factors in the rise of sologamy.

Neo-feminism’s move to emasculate men hasn’t just damaged men and diminished their needs. In the absence of true male presence, women have forgotten how to be women and are instead trying to fulfill needs that men traditionally meet all on their own (in the context of heterosexual relationships).

In dropping a daisy cutter on traditional maledom, the collective self-esteem and feeling of societal belonging for far too many women has been claimed as collateral damage.

“For better or worse” is a vow married folk make to another person. The “better” parts are easy, the “for worse” can be brutal. Sologamists preclude themselves from experiencing the growth that comes from “for worse.” You’re already stuck with yourself for the duration of your life whether you choose to marry yourself or not, making the vow to one’s self pretty meaningless.

There’s nothing wrong with being single. There is nothing wrong with affirming to yourself that as Anderson describes it “you are enough.” None of these singly is problematic. The issue lies in the belief that the fulfillment and betterment possible between two partners is attainable alone.

Marriage is not always easy. Living with another person, learning to balance their needs and wants with yours is inherently challenging at times. But it rounds us out, makes us less selfish, affords us a unique opportunity to grow, learn, and become better people coupled than we could ever hope to be alone.

I am struck by the degree of narcissism this would require to actually stand in front of a crowd of your reputed friends and “marry” yourself.

In the pursuit of wealth, pleasure, leisure, and narcissistic indulgence, this does take the last to a whole new level.

Well, other than the selective-child political phenomenon, that is. Except in the “1 in 5” cases where it is conception then choice, the normal order is choice then conception. The former is largely theoretical, while the latter is responsible and humane.

Isn’t everyone already “married” to himself or herself in a sense? It’s not like we can “break up” with ourselves, or do things separately from ourselves. If you pretend to be “married” to yourself, what changes? What’s the point? This seems to be lunacy, which leads me to believe Erika Anderson is a democrat.

I think it’s kind of a public acknowledgment that The Voices have agreed to settle all of their arguments amicably.

Soooooo! If she falls into drinking and spousal abuse does she get a protection order against herself? It’s going to be tough staying 500 feet away from herself, or maybe not.

Just when I think it can’t get any freakier, I read this. Face plant on table. Twice.

Why did she choose to incorporate when she could file as a sole proprietor?

Does she benefit from an invisible partner or does this status confer some other benefit (e.g. distributed risk, democratic leverage)?

She would not qualify as “sole proprietor” if she has multiple personalities. Just saying.

Okay, but if I married myself, I’d have to insist on a prenuptial agreement!

True, the divorce would be epic. “I no longer like myself, and my differences are irreconcilable!”

If it got too bad, can you imagine the restraining order requiring you to keep at least a hundred feet away from yourself? And what if you decide to remarry (yourself or somebody else)? Would you lose the alimony you’re paying yourself?

And if you married yourself twice, would that be bigamy?

Truly, the sound of one hand clapping.

No worries Professor! You can pioneer the first Sologamist divorce and capitalize on your expertise!!! (Do you get paid by each party?)

If you truly were “enough”, you would have stayed comfortably and securely single. No, your self-absorbed posturing clearly says that you’re screaming “I’m OK” while you’re actually emotionally drowning.

I guess the next step is for her to consummate her marriage.

Let me know when it gets to the divorce due to “irreconcilable differences” part. Maybe domestic abuse. Too fat.

For more on the subject, read “How to Be Your Own Best Man.”

Reminds me of the John Candy character Barf, in Space Balls

she’s dating and open to marrying another person.

Until now I didn’t think “hate f***” was a tbing. I only came across it in feminist works.

Other women at least hold out hope there’s something about them a man can love. Not this one.

And etc. Ancient Greece and Rome will have nothing on modern day USA.

More insanity being embraced. What real world advantage is there to a person being “married” to himself solve? Does the person automatically inherit his or her property when he or she dies? If he has an “affair” with another person, can he divorce himself and force himself to pay alimony or child support? Can you legally file your income taxes as a married “couple”?

Some idiocy is best simply ignored.

I know that I am old-fashioned, but one thing I learned early on in marriage – it isn’t all about you. When husband and wife each consider the happiness of the other to be more important than their own, the relationship soars and I am sad to see so many people missing out. It takes two to tango, of course, and self-fulfillment is all the rage these days. But the good Lord said that the two become one and when that occurs, that one is so much greater than the sum of its parts.

Men and women – and that is all there really is – are complementary for a reason. There are many good, positive relationships possible, but none can match that of a God-joined man and wife. I hasten to add that it isn’t just SJW’s, atheists, progressives and the like that haven’t figured this out. Many Christians haven’t, either.

This is more “smash monogamy” nonsense. People who love one another form family units that are stronger, happier, and more resilient than individuals. Their priorities change, too, because they often choose to build shelter for themselves and their children, and demand decency from their surrounding society. We have seen what this motivation to build can do for a society, through the example of the Greatest Generation, that came home from war determined to be fruitful and multiply.

“Sologamists like Erika Anderson of Brooklyn describes her decision to mary (sic) herself as “women saying yes to themselves.””

To Erika and her ilk, I recommend stocking up on AA batteries.

The heavy duty ones require D cell batteries. Don’t ask me how I know that.

I have seen this before before but never by a man. It really is a side effect of toxic feminism. No one can play by the rules these women have set up for a man so they pretend they can check off that they are oK by this weird declaration.

The worship of one’s self that has pervaded Western culture just jumped its own shark. Babies, spouses, jobs, gender at birth, religion, absolute truth, right & wrong, and personal responsibility. Why be bogged down with anything that keeps us from achieving the most important thing anyone can ever have; personal happiness.

Bet she voted for shrillary…

I want to be around for the divorce. Should be a doosy.

Sight unseen, I will bet more women are doing this than men. One other reason is that then the invited guests can bring wedding gifts. I remember reading about this years ago. Some woman was pissed she was still single and buying wedding gifts, and not getting anything for being single.

Women are crazy. (Ok, men are stupid, to balance it out.) Did you see the article about the Woman once terrified of being pregnant now transitioning to woman terrified won’t be able to get pregnant.?

Well, this is just peak “fiddling” while Rome burns…

Yet they cannot answer the questions “Why am I single? Why can I not commit to another and that other commit to me?”

Now that we have reached peak insanity, the obvious question must be asked. Can these people now go f**k themselves and leave us normal people alone?

Good, then they can sit at home and talk to themselves. Less arguments that way…

“She said even though she’s married to herself, she’s dating and open to marrying another person.” This would be polygamy.

Kimberlee, you left out the main reason for man-woman marriage: the strength of a family unit and nurturing of children.

If I’m not mistaken, every state has laws against incest. If that’s the case, sologamy would be illegal everywhere, I would think.

The appropriate song by Sparks, one of my fav groups:
https://www.youtube.com/watch?v=A-ONRt9ER6Y