Police treating the incident as terrorism. 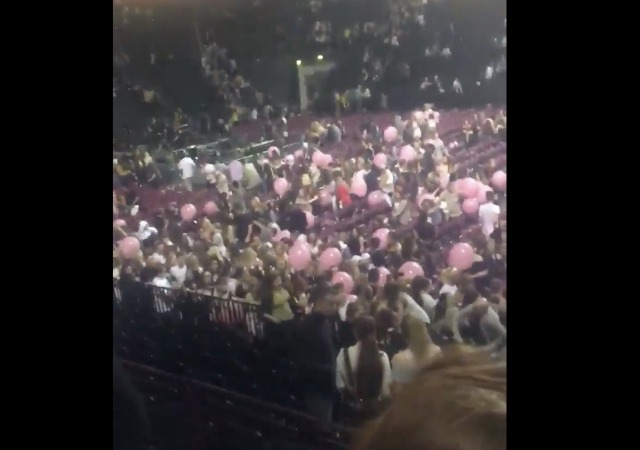 *We will update this post through the night* (UPDATES BELOW)

An explosion occurred at an Ariana Grande concert at Manchester Arena in Manchester, England. Police confirmed 19 dead and 50 injured, but have not confirmed exactly what caused the explosion or who caused it.

Police have told Sky News that they decided to treat the incident as a “possible terrorist incident” until the officials know otherwise.

#Manchester explosion @gmpolice statement: 19 dead and around 50 injured in the incident that's currently being treated as terrorism pic.twitter.com/MsKOLMXyCu

A Western law enforcement official has told CNN that a male at the scene in Manchester has been identified as the probable suicide bomber.

A US official said a suicide bombing is now considered to be the “likely” reason for the blast.

Mark White, Home Affairs Correspondent, says: “Information coming from local hospitals in the Manchester area, say they are treating a number of people with what are believed to be shrapnel-type injuries.”

The incident happened outside of the arena:

Bomb disposal teams have arrived at the arena. Grande is popular with younger kids, which means the audience had plenty of children in the audience. The explosion caused many parents to become separated from their kids. The Holiday Inn at Manchester has taken most in:

Witnesses to the incident and outside afterwards have spoken to the media about what happened. From the BBC:

Andy Holey, who had gone to the arena to pick up his wife and daughter who had been at the concert, said: “As I was waiting, an explosion went off and it threw me about 30 feet from one set of doors to the other set of doors.

“When I got up I saw bodies lying on the ground. My first thought was to go into the Arena to try to find my family.

“When I couldn’t find them, I went outside with the police and fire and looked through some of the bodies to try and find my wife and daughter.

“I managed to find them eventually and they’re OK.

“It was definitely an explosion and it was some force. It happened near the box office at the entrance to the Arena.”

The BBC’s Tim Ashburn arrived on the scene and told the network that volunteer paramedics told him they treated people with “shrapnel-like injuries.”

EXPLOSION AT MANCHESTER ARENA AND EVERYONE RAN OUT SO SCARY? pic.twitter.com/pJbUBoELtE

The UK Daily Mail is reporting that ISIS supporters celebrated online overnight following the blast, and one of its adherents posted what may have been a potential warning that an attack was being planned at the Manchester Arena a few hours before the bombing.

The British locals responded to the tragedy by opening up rooms and other forms of support for concert goers and others impacted by the tragedy.

#RoomForManchester: If you're stranded in town or can help someone who is please let us know and we'll try to help! https://t.co/qQrAeo3n3c

Minutes after news broke of the Manchester Arena terror attack, following Ariana Grande’s concert, there was an outpouring of love and support.

The moving offers included rooms to anyone who was stuck in the city, lifts out of the city centre, hot drinks or even a simple hug in the aftermath.

The American pop star whose show was ending when the bomb detonated is “broken.”

“Broken,” the 23-year-old wrote in her first reaction on Twitter.

“From the bottom of my heart, I am so so sorry. I don’t have words,” she added.

The tweet came about five hours after the explosion at the 21,000-capacity Manchester Arena.

Many music industry icons are tweeting their support, shocked by the nightmarish conclusion to an evening of dance and song.

My thoughts, prayers and tears for all those affected by the Manchester tragedy tonight. I'm sending all my love.

She has indefinitely suspended her world tour.

I’m betting the bombers will not turn out to be Lutherans or Catholics.

This was a concert heavily attended by children and young teens. Monstrous.

No reason why not. The Europeans have clearly shown that they won’t respond in any kind of agressive manner so the muzzies can pretty much let their sadism run free.

The Serbians knew that Austria would, yet again, back down as long as Russia had their back. Who would be crazy enough to start a war over fringe terrorists killing a ridiculous minor noble?

The Germans knew that France and England would, yet again, respond to the invasion of Poland with strongly worded protests.

The line between “not my business” and millions dead is razor thin.

notamemberofanyorganizedpolicital in reply to clintack. | May 23, 2017 at 9:58 am

Pope Francis, Theresa May, and spokesmen for the EU, among other world leaders, including former President Obama (who momentarily interrupted his perpetual vacationing), have all condemned this bombing, and most importantly, have assured us,

This had nothing – absolutely nothing – to do with Islam.

Of course not. I’m sure the police are going to find the breakthrough clue any moment. They checking Ariana Grande’s Facebook page to see who recently disliked her because he was angry she wasn’t paying him enough attention. Clearly angry white male former fans are now resorting to suicide nail bombs. That HAS to be the explanation.

Because no other explanation will be allowed.

Reports are coming in that it was a suicide bomber, and injuries are shrapnel-like.

May God receive the souls of those who have been murdered and heal and help the injured.

I wonder if the sicko who did this read Stephen King’s Mr. Mercedes trilogy.

Or maybe the Koran.

Very sad. But they can’t complain, can they….

At least the murderers will be on the cover of the Rolling Stone magazine.

Since Islam forbids music (along with a host of other things that might prevent a follower from being all about Islam, all the time), anyone at a concert is either a Muslim apostate or an infidel in rebellion against Islamic law. Either way such people can be lawfully killed by any Muslim on their own initiative.

Too bad Ariana Grande didn’t get blown-up, instead of one of the innocent kids who did:

Get a grip. She said something offensive. That doesn’t mean she deserves to *die* for it.

Who said she deserves to die? But if anyone should be a victim of a hate crime instead of an innocent kid, it’s Grande.

How many people have died or otherwise suffered violence because of Grande’s internationally transmitted rant on how she hates America and Americans?

Don’t be so forgiving. You – or a kid close to you – might be blown-up next by someone inspired by the likes of Grande.

By her words, the useful idiot is on the level of Rasmea Odeh:

notamemberofanyorganizedpolicital in reply to TheFineReport.com. | May 23, 2017 at 1:41 pm

Has she made any other statements supporting terrorists?

Who said it? YOU DID. “Too bad Ariana Grande didn’t get blown-up, instead of one of the innocent kids who did.” And then you say it again. “But if anyone should be a victim of a hate crime instead of an innocent kid, it’s Grande.”

Your words. Her crime, the reason you want her dead? She said something you don’t like. You’re offended, so you want her to suffer. You think like a leftist.

“How many people have died or otherwise suffered violence because of Grande’s internationally transmitted rant on how she hates America and Americans?”

I don’t know. How many? Give me a number. Source it, too. I’m guessing the number of dead people because of something she said is… ZERO.

“Don’t be so forgiving. You – or a kid close to you – might be blown-up next by someone inspired by the likes of Grande.”

Inspired? Do you think terrorists are “inspired” to murder by a generic flavor-of-the-month pop singer?

Get. A. Grip. Calm down before you have a stroke, because what you’re writing is lunacy.

Awful news. I have to wonder if the timing had anything to do with Trump’s visit to the middle east – i.e. terrorists sending a response.

And the liberals are bemoaning islamiphobia. .. More outraged that someone might say something mean about islam than 22 dead kids and 50-60 others shredded by nails … Can someone explain liberalism to me … Again …. Please

“Liberalism” is not at all what it says it is. Leftism is the issue as it is a recurring cancer within Western thought. Leftism becomes a malignant tumor and then spreads through the body—culture, until it devours the body and then puts an end to itself and often everything around it. Leftism and Islam have much in common that way. For this reason, each now sees the other as a temporary ally. Islam destroys out of doctrinal justification while Leftism controls what can be said, done or thought about the destruction because “Islamophobia” you know.

Yes: liberalism is about being a feel-good useful idiot, entitled to defer the heavy-lifting of conscience and tough-love to your fascist handlers. In return, you are allowed to be a delusional snowflake, honored by your handlers’ media useful idiot stars and your handlers’ useful idiot education representatives.

When there is a blip in the system (like a terrorist attack enabled by “liberal” policies) the upset, but still-delusional snowflake merely needs to tune-in to any democrat media outlet for rationalizations and related additional instructions – which are cooked-up at Harvard and passed on to the NY times for distribution.

Imagine being such an idiot?

Religion of Pieces earning it’s title again! It’s yet another example of why the mass migration of these people to Europe was a horrible idea!

notamemberofanyorganizedpolicital in reply to smalltownoklahoman. | May 23, 2017 at 10:00 am

Occasional acts of deadly terrorism have become the new norm in Europe. And the elected (and unelected) bureaucrats are obviously okay with this.

“Police treating the incident as terrorism.”

The Obama administration would be mulling this over for days, if not weeks, before issuing a tepid response relating to Islam.

The obama/jarrett administration would probably be comfortable with it – for some blood must unfortunately be spilled in the fight for fascist glory.

Just keep flooding your country with these filthy heathen bastards. I’m sure things will get better.

Immigration kills. It is way past time to turn off the spiggott. I’ve had it with this politically correct BS. Islam and it’s adherents are incompatible with Western civilization. They have to go back.

I am not a fan of her music, but I think suspending her tour is the wrong move and even did the unthinkable for me and took to twitter to encourage her to not let these madmen win. Every time something like this happens and we become more fearful and modify our lives we just make it easier to be a victim. It is time to react to these attacks by potbellied savages as we should and that is with righteous rage and a countervalue retaliatory attack.

We know where these people are and we know how to get to them. Last night 20 innocent people died. As far as I am concerned anymore if 20 die because of these savages then within 7 days 20,000 of their people should die.

Are we now afraid to call these terrorist acts, exactly what they are doing ? One of these day ( very shortly ) there is going to be a big ” Backlash,” to the same old groups, that are pulling the acts. There will be many innocent people included in the retribution. Believe me, It will happen. This is coming, in Europe as well as America. If these ” Animals,” think that they can just keep pulling these Barbaric ” Acts,” off, with no retribution, they have misjudged the ” Civilized,” part of the World. They are ” Used,” to living like this in their own country, but we will respond.