“Pussy hats in all shapes and colours to show our resistance against Trump,” declare protest organisers on their website 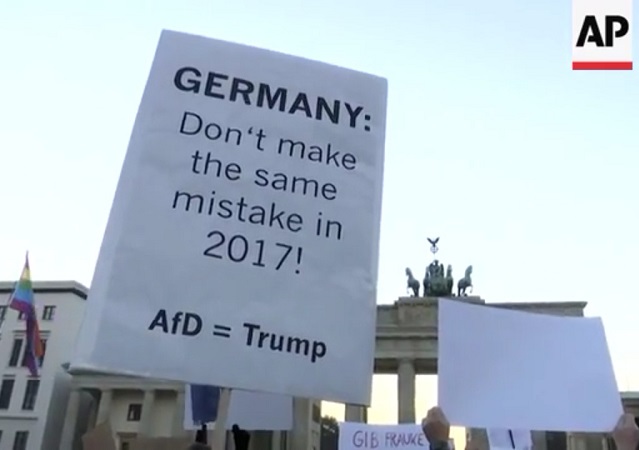 With Europe under permanent siege, a fact that Monday night’s deadly terrorist attack in the British city of Manchester again painfully drove home, leftist agitators are hoping to gather in their thousands in the Belgian capital of Brussels to “protest” President Donald Trump’s visit. “Tens of thousands” are expected at the anti-Trump march in Brussels on Wednesday, British newspaper Guardian wrote. Brussels-based ringleaders of the anti-Trump protests were mad at President Trump for “excluding people”, “denying global warming,” and “intimidating the media.”

On their website the organisers urged that they “would like to see pussy hats in all shapes and colours to show our resistance against Trump.” Among Far-Left political parties and unions, the UK-based charity Oxfam and the ‘environmental’ group Greenpeace have been listed as the sponsors of the protest.

Tomorrow, President Trump will begin his two-day visit to Brussels, the administrative seat of the European Union. He is expected to meet the EU and NATO as well as the newly elected French President Emmanuel Macron. Prior to his arrival in Brussels, Trump will make a brief stop at the Vatican to seek an audience with Pope Francis.

Citizens and civil society organisations are joining forces and taking action against Donald Trump, the American President, who comes to Brussels, on May 24th and May 25th.

A protest march “Trump Not Welcome” will, in particular, be organised on May 24th. Its departure is set for 5 p.m. at the Gare du Nord.

NATO, which is due to hold a “special meeting”, on Thursday, between the heads of state and government of the 28 countries of the alliance (plus a further country), is also the target of these anticipated initiatives. (…)

Thousands of people have already signed up to this via the social network Facebook. Other organisations are also supporting the “call to arms”.

Grown up men running around in ‘pussy hats’ aside, President Trump will be tackling some serious issues when he meets European leaders in Brussels. According to the German broadcaster Deutschlandfunk, NATO might join the new anti-ISIS coalition announced earlier this week by President Trump during his visit to Saudi Arabia.

“NATO is not yet a formal member of the international “Anti-ISIS coalition.” Despite Berlin and Paris having their reservations [over such a coalition], it is very likely that they will officially join the alliance.” [Deutschlandfunk, May 22, 2017; author’s translation]

The German broadcaster, citing official sources, also revealed that the European leaders have agreed to President Trump’s demand asking them to meet their NATO spending obligations. US President’s spending demands were initially met with scorn and ridicule from German politicians and the mainstream media. Germany’s Foreign Minister, Sigmar Gabriel, declared that it was neither “reachable nor desirable” for his country to spend the mandatory 2 percent of GDP on NATO. British newspaper Guardian proclaimed, “Germany rebukes Tillerson over call for NATO allies to boost defense spending.” In March, BBC ran the headline “Germany rejects US pressure for Nato spending rise.”

After dragging their feet for months, European leaders, it seems, have decided to pay their NATO membership dues in full. So much winning!

Additionally, Trump’s NATO partners will promise to increase their military budgets, as demanded. The proposal has been tabled, as [German public broadcaster] ARD’s Europe-Studio in Brussels has learned, that once a year every member state will submit a paper — a kind of plan — to the headquarters showing how national defense budget has been structured; where the money is spend, but thirdly, how much one intends to contribute to NATO operations. [Deutschlandfunk, May 22, 2017; author’s translation]

EU, France, and Germany are likely to pose a united front following President Macron’s win. German Chancellor Merkel’s position too has been consolidated after last week’s regional election victory and her continued strong showing in the opinion polls ahead of September parliamentary election.

But President Trump’s instinct of sticking to his position despite hostility from his opponents and the accompanied media outcry is finally paying dividends in terms of foreign policy. If these German media reports are any indication, President Trump can look forward a successful European visit.

The coverup of refugee crises forced by elective wars, and the resurgence of left-wing anti-nativism, [class] diversity cannot be known.

The Global Left is on display in all their radiant mental illness.

it is interesting to see how the leftists and globalists (are they any different?) are bowing to POTUS – they kept believing
their own garbage for so long that they were almost lost as
independent peoples.
they seemed to think that daddy, USA, would defend them forever – POTUS said NO in no uncertain terms.

BTW Rags, do you still think that DJT is not what we need at this point in time.

Grown up men running around in ‘pussy hats’ aside…

Seems so appropriate that these liberal ‘grown up men’ have adopted the pussy hat as a sign of their ‘resistance’, doesn’t it?

Resistance? I thought it was a confession.

To think, we were 3-4% votes away from another 4-8 years of what these people want.

Worse. The double whammy of an obama/jarrett-hillary clinton presidency would have ended the Republic and our way of life. We would have lived in the hell that is becoming Europe, as they fight a civil war. They ARE in the midst of a civil war.

You should give rags a spoiler alert before you discuss whether Trump or Clinton was better for conservativism – he’s still trying to answer the question.

Well, with some of these “men”, a hat might be about as close as they ever get to the real thing…

All ten of them.

you can forget the hats, gentlemen – everyone already knows you’re pussies.

Trump would get a better welcome from EU leaders if he were an Islamic terrorist and rapist. Their shame, not his.