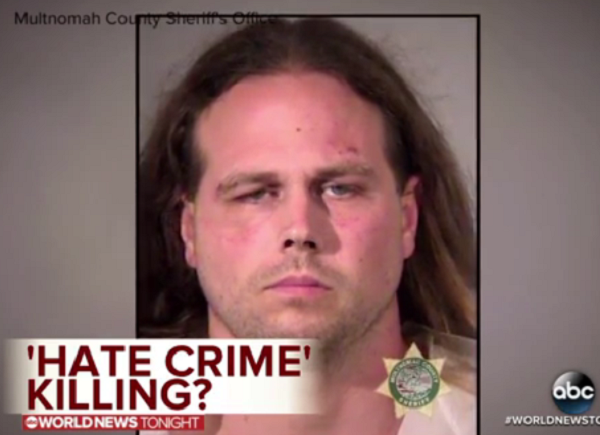 A 35-year-old white male fatally stabbed two men and wounded another after they came to the assistance of two Muslim girls the suspect was verbally attacking.  These men, rightly being called “heroes,” stepped in to attempt to quiet the raving suspect; two of them were fatally stabbed, the third was wounded.

35-year-old white supremacist with a criminal record has been arrested in connection with the stabbing deaths Friday of two men on a light-rail train in Portland, Ore., who intervened when he began to hurl anti-Muslim epithets at two women, one who was wearing a head scarf, police said.

Jeremy Joseph Christian of North Portland was jailed early Saturday on charges of aggravated murder, attempted murder, intimidation in the second degree and felony possession of a restricted weapon. He is being held without bail, and could face additional charges, police said.

The murdered men were Taliesin Myrddin Namkai Meche and Rick Best, while the wounded man is identified as Micah Fletcher.

Taliesin Myrddin Namkai Meche will be remembered as a hero by his family and many in Portland.
The 23-year-old was just starting his career. He was a compassionate young man with many plans, his sister said at Saturday’s vigil.

After graduating from Portland’s Reed College with a degree in economics last year, he began working at an environmental consulting agency. He had just bought a house and dreamed of getting married and having children in the future.

“He was a hero and will remain a hero on the other side of the veil. Shining bright star I love you forever,” his mother Asha Deliverance, posted on Facebook.

. . . . Rick Best always worked hard, tried to help those around him and seemed to have a heart for public service.

After 23 years with the military, he joined his family in Portland’s suburb of Happy Valley. First, he became an electronics repairman and loved it because he could spend time with his children.

. . . . “He was a devoted husband who talked often of his family. He was a model public servant,” said David Austin, spokesman for Portland commissioner Chloe Eudaly.

He was as a dedicated employee and the first person his colleagues would go to for help, his supervisor told The Oregonian.

. . . . Micah Fletcher, 21, is being treated in a hospital with serious injuries. His mother, Margie Fletcher, told CNN affiliate KATU that the knife missed his jugular by 1 millimeter.

“He’s in really bad condition,” she said. “I’m proud of him for standing up. I’m grateful that he’s here. It’s hard for me to say I want people to stand up, but two girls might be alive because of them.”
She said her son has intervened for others before.

The Oregonian reported Micah Fletcher was taking the train to his job at a pizza shop.

He won a 2013 poetry competition with a poem against anti-Muslim prejudice, the newspaper said.

Interestingly and completely unrelated to the attacker’s apparent motivations, the Washington Post leaped at early and incomplete reports, implying none-too-subtly that Christian is a Trump supporter.

The attack comes as Portland has weathered rising tensions between groups with fiercely opposing views, including white nationalists, right-wing extremists, anarchists and so-called left-wing “antifascists,” known as the “antifa.” These groups have been colliding with increasing frequency across the country since the election last fall of President Trump — especially in cities regarded as liberal. In April, Berkeley, Calif., was the scene of riots as protests and counter-protests swirled around planned appearances of conservative commentator Ann Coulter and Milo Yiannopoulos, a former Breitbart News editor.

Jill Stein tweeted her sense that the horrific incident was rooted in “Trump’s America.”

Another heartbreaking tragedy in Trump's America, as a white nationalist shouting anti-Islam slurs murders 2 on Portland, OR subway.

Christian’s attendance at a “right-wing free speech rally” has become an integral part of the reporting on this horrendous crime, so perhaps Stein was taking her cue from the early reports.

Christian is a known right wing extremist and white supremacist. On April 29, Christian showed up to the right-wing “March for Free Speech” on 82nd Avenue in Montavilla with a baseball bat in an attempt to assault left-wing protesters. The bat was quickly confiscated by Portland police officers. He ranted how he was a nihilist. He’d soon yelled racial slurs (“fuck all you n*****s”) and gave the Nazi salute throughout the day. He yelled “Hail Vinland” throughout the day.

What they fail to report is that Christian was removed from the free speech rally for these exact reasons.  Indeed, before he was removed, he verbally espoused support for Senator Bernie Sanders (D-VT) and Jill Stein.

He also expressed his support for Sanders and Stein on his Facebook page:

Amid antisemitic "rants about Jews on Facebook, he expressed support for Bernie Sanders and Jill Stein for president" https://t.co/tYRYUoMPa4

The Portland hate crime stabber isn't a member of the alt-right of a Trump supporter. Here's what we know about him. https://t.co/7So5UDH419

When Jeremy Joseph Christian was accused of fatally stabbing two people in a hate crime against Muslims in Portland on Friday,  the media quickly branded him an alt right Trump supporter.

But the reality is far stranger.

. . . .  Writing for Willamette Week, Corey Pein said he interviewed Christian during the march, and the alleged killer chanted the n-word and threw Nazi salutes. Pein writes that amid Christian’s rants about Jews on Facebook, he expressed support for Bernie Sanders and Jill Stein for president. The Willamette Week writer describes that as a “distraction” others will seize upon as they contradict the narrative of Christian as a real white supremacist.

While Pein says the organizers of the march “disavowed association” with Christian following the murders, it’s worth noting that they did a lot more than that: The marchers kicked him out of the march last month. Video footage shows a mixed-race group of marchers calling on police to remove him.

Not only was he deemed a vile racist and disavowed by the people at the rally, but “the Trump people” specifically stated at the time that he’s not with them.

Over the past year, Christian’s Facebook statuses included his hatred for Hillary Clinton and Donald Trump, and support for Bernie Sanders and Black Lives Matter.

Most telling are his comments, where describes himself a nihilist.

In addition to liking a variety of news websites and favorite bands, Christian’s profile reveals a startling number of “likes” for nihilist pages, psychedelic drugs and Bernie Sanders. Besides a “like” for the Breitbart news page, there’s no interest in any pro-Trump, alt-right, white nationalist or conservative group.

While the mainstream media and left-leaning would-be politicians like Stein politicize the attacks, the heroic victims of Christian’s unhinged, white supremacist attack are being side-lined.

Oops! Doesn’t fit the narrative! Well, that’s the last you’ll ever hear of this story, then. (if he would have been wearing a MAGA hat it would have been headline news for the next 6 weeks)

I was just thinking how, if the perp had been black, every major news outlet would have been leading with “oh, this was just one deranged, psychotic individual and you should really feel sorry for him.”

notamemberofanyorganizedpolicital in reply to mathewsjw. | May 30, 2017 at 5:15 pm

Just what I figured.

Either that or a CIA employee.

I think that explains everything, but I hope that he is again declared sane and convicted of the crimes. It would be a pity if he gets off free via an insanity plea.

I think we have a diagnosis problem here.

and the alleged killer chanted the n-word

Now, who is it who calls blacks “n—–s”? Other blacks. It’s even a staple of stand-up comedy. So are these blacks really secret white supremacists?

So do we know that the good samaritans didn’t assault the crazy guy and he defended himself?

That’s a very good question. Jeremy Christian is clearly a violent kook, and probably should have been in prison for his past robberies and kidnapping convictions (THANK YOU, LIBERALS!), but with the prevailing attitude among many that siding with the poor beleaguered Muslims is the right, virtue-signaling thing to do in response to a hate-spewing rant that may have been anything from simply unpleasant, unpopular speech to harassment and disorderly conduct, three men “confronting” him, “intervening” on the women’s behalf, may have been what a reasonable person would call an assault, deadly or not.