The Pentagon uses the eastern Gulf for military training. 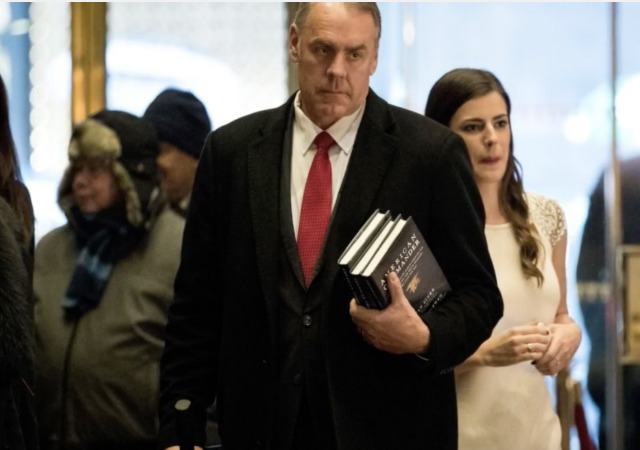 A.M. Kurta, the Pentagon’s under secretary of Defense for personnel and readiness, stressed to Rep. Matt Gaetz (R-FL) “that military training and related exercises in the eastern Gulf, which borders Florida, necessitate a continuation of Congress’s ban on drilling.”

The Defense Department has made it known over the years that while “there may be areas of potential oil and gas work in the Atlantic,” officials believe the drilling “may not be compatible with defense operations and interests.”

“The moratorium … ensures that these vital military readiness activities may be conducted without interference and is critical to their continuation,” Kurta wrote to Gaetz in response to a letter inquiring about the drilling ban.

“Emerging technologies such as hypersonics, autonomous systems, and advanced sub-surface systems will require enlarged testing and training footprints, and increased DoD reliance on the Gulf of Mexico Energy Security Act’s moratorium beyond 2022. The moratorium is essential for developing and sustaining our nation’s future combat capabilities.”

The federal government has kept drilling away from the eastern Gulf of Mexico for decades due to military training so this is nothing new. Sen. Bill Nelson (D-FL) sponsored legislation in 2006 to make it official. Nelson sent out a press release on Monday to back Kurta’s request:

Nelson, a long-time opponent of drilling near Florida’s coast, often argues in Senate debates that attempts to expand offshore drilling could threaten our nation’s military readiness by disrupting military weapons testing and training in the Gulf of Mexico. In 2006, he and then-Sen. Mel Martinez successfully brokered a deal to ban oil drilling off much of Florida’s Gulf Coast through most of 2022.

As a result, there is currently a no-drilling zone that extends 125 miles off much of Florida’s Gulf Coast and as far as 235 miles at some points to protect vital military training areas in the eastern Gulf until June 30, 2022.

Earlier this year, Nelson filed legislation to extend the moratorium for another five years, from 2022 to 2027.

Zinke attended the Offshore Technology Conference in Houston, TX, where he “signed a secretarial order for the Bureau of Ocean Energy Management (BOEM) to start formulating a new five-year plan for drilling rights sales.” World Oil explained the order:

Secretarial Order 3550 directs BOEM to immediately develop a new “Five Year Outer Continental Shelf Leasing Program” with full consideration given to leasing the OCS offshore Alaska, mid- and south-Atlantic, and the Gulf of Mexico. It also directs BOEM to work with the Department of Commerce’s National Marine Fisheries Service to expedite authorization requests for seismic surveys, particularly for new or resubmitted permitting applications in the Atlantic to understand the extent of America’s energy potential. The Secretary’s order also directs prompt completion of the Notice to Lessees No. 2016-N01 dated Sept. 12, 2016, and ceases all activities to promulgate the proposed “Offshore Air Quality Control, Reporting, and Compliance Rule.” The order also directs BOEM and BSEE to review a host of other rules and report progress within 21 days.

Zinke explained that his decision can create jobs and reduce America’s dependence on foreign oil. From The Hill:

“You should be excited,” Zinke told the attendees at an event hosted by the industry-based Consumer Energy Alliance during the Offshore Technology Conference.

“If you’re in the oil and gas and energy segment in this society … the stars are lined up,” he said.

He said producing more offshore oil and gas is good for the economy, national security and even the environment, since the United States has strong safeguards for drilling.

“The United States has the most stringent, toughest, best regulatory framework for safety and environmental extraction of our resources in the world, undisputed,” Zinke said.

All of this comes on the heels of President Donald Trump’s executive order to start a five year plan to open offshore drilling in the Gulf. From Fox Business:

The order could lead to a reversal of bans on drilling across swathes of the Atlantic, Pacific and Arctic oceans and the U.S. Gulf of Mexico that former President Barack Obama had sought to protect from development in the wake of the huge BP oil spill in the Gulf of Mexico in 2010.

Is this under secretary a Obama holdover by chance?

Obama spent 8 years stacking the military and the associated bureaucracy with a plethora of eco-idiots. An entire ocean out there, but nooooo, the military has to use THAT one spot and not the spot 5 miles up the coast for their training.

And yet back in the 90’s, when Puerto Rico said that the Marines had to give up their best jungle training ground on the Island of Vieques, the military just said “oh, ok, you guys want it now? Ok, we’re gone.”

And how did that work out, Tom?

I used to ride Navy airplanes in and out of Roosy Roads on a regular basis.

The Pentagon is chock-full of eco-warriors. The press will continue to play this game. The Navy willingly spent billions on green-diesel fuel for ships and for solar projects on bases. No rationale to continue to ban offshore drilling except politics. If it’s good enough for Louisiana, Texas and Alabama and Florida… it’s good enough for everyone else.

Every Army military base wants to expand their maneuver area. All of them. It’s like they see a tiny chunk of pasture next to their base and say to themselves, “You know what would make that look good? A tank, right there. Oh, and some infantry!”

It’s the exact same with the Air Force (darned little planes, we should chase them out of this state so we don’t have to worry about dodging them) and the Navy (Yeah, I know we’re supposed to be the all-seeing sub force, but how were we to know there was a ship there when we surfaced? We need a bigger area to play with our subs so this won’t happen again. How about the Pacific?)