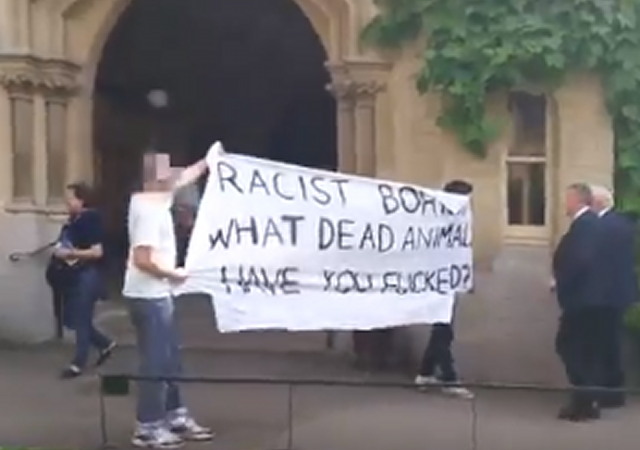 It looks like obnoxious liberal students are acting out in the UK as well. Good to know it’s not just us.

Boris Johnson berated by angry students at Oxford College: ‘What dead animals have you f****d?’

Foreign Secretary Boris Johnson was met by a group of angry students as he returned to Balliol College at Oxford University for a private party.

The 52-year-old had allegedly been spending time at his former university’s library, but as he attempted to leave the campus, news of his attendance had got out and he was soon greeted with protest banners and heckles.

One of the banners read “Racist Boris, what dead animals have you f****d?”.

The cries included “hands off our free school meals”, “you should be ashamed of yourself Boris” and “get back to the Bullingdon club”.

They were referring to the elite dining club that Johnson was allegedly a member of during his time at Oxford. Members of the club were reportedly involved in the vandalising of restaurants and student rooms. One heckler added, “do you want to smash a restaurant?”.

Boris wanted a quiet visit to his old college for lunch today. Students found out and had other ideas. pic.twitter.com/2gCtglTyXW

You have to love the maturity and poignancy of liberal protesters.

I wonder why they digitized the faces of these stars of liberal thinking? Are they ashamed? (they should be…)