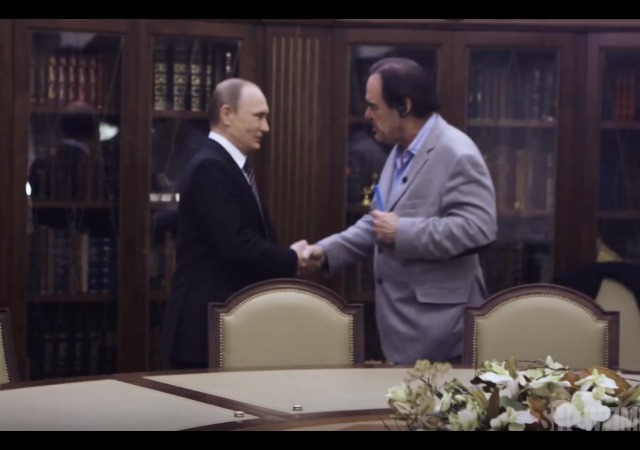 Director Oliver Stone has interviewed Russian President Vladimir Putin for a documentary that will air on Showtime in June. This should fit in nicely with his interviews of Fidel Castro and Hugo Chavez. Believe it or not, he has also interviewed Israeli PM Benjamin Netanyahu! From USA Today:

Controversial director Oliver Stone got the chance to ask Russian President Vladimir Putin the question many have wanted to ask: “Why did Russia hack the election?”

Putin chuckled in response. But as for his actual answer? You’ll have to wait until the release of Stone’s four-hour documentary, The Putin Interviews, on Showtime next month.

The exchange between Stone and Putin was unveiled in the documentary’s teaser trailer released by Showtime on Monday.

The intelligence community has blamed Russia for meddling in the 2016 U.S. presidential election, including hacking into the emails of the Democratic National Committee.

According to the Associated Press, Stone interviewed Putin more than a dozen times over two years. The last time the two got together was in February.

The documentary will air from June 12 to 15.