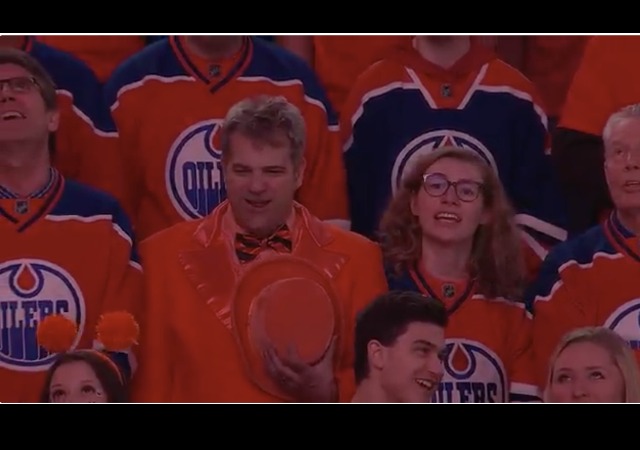 Beautiful! As you probably know, when Canadian and U.S teams play against each other, the anthem singer sings both songs. Well, before the Anaheim Ducks/Edmonton Oilers game, the microphone gave out, which prompted Canadian music star Brett Kissel to ask the audience to sing America’s anthem. Boy did they ever. From The Washington Post:

After Kissel realized something was amiss with his microphone at the start of “The Star-Spangled Banner,” he gestured for the crowd to join him in an impromptu sing-along. The 18,000-plus fans in attendance, most of them Oilers fans, joined forces for a beautiful rendition of the American national anthem.

The mic worked in time for the Canadian anthem, but the crowd belted out that tune as well.

An incredible moment
When the mic doesn’t work, the crowd takes over & belts out The Star-Spangled Banner…
…In Edmonton
???? #StanleyCup https://t.co/pWvrlknbV6

Mic didn't work for the anthems tonight @RogersPlace. But no worries. The best singers & fans are in #OilCountry! @EdmontonOilers!