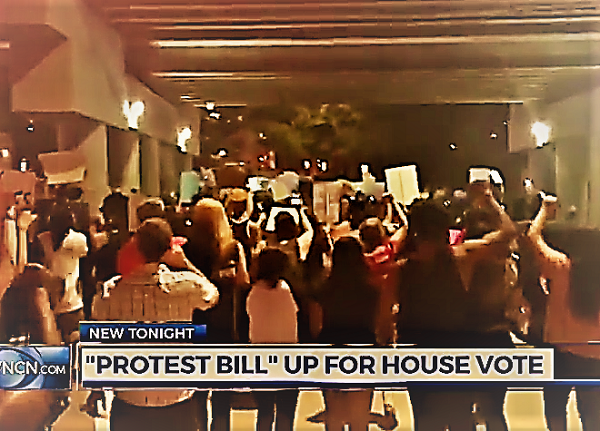 In September of last year, Andrew Branca wrote a post entitled “Is it lawful to ‘run-down’ rioters surrounding your vehicle?”  The question he addressed dealt with one’s rights if one perceived an imminent threat of bodily harm and was a response to a tweet from Glenn Reynolds, aka Instapundit. 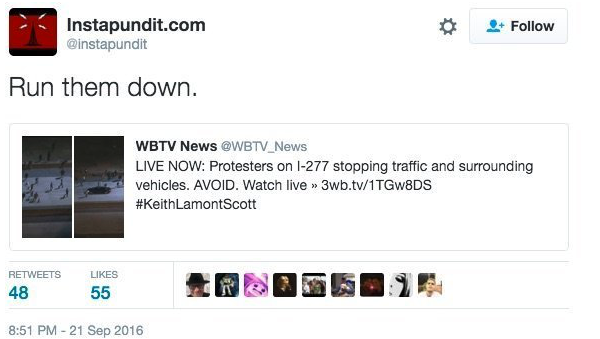 This response to the 2016 North Carolina riots got Insty suspended briefly from Twitter.  The question raised, however, is a good one and has been taken up by the North Carolina legislature.

North Carolina’s House passed a bill this week that limits civil liability if a driver, while exercising due care, harms a person with their vehicle while that person is involved in a protest that blocks traffic.

A new bill has passed the NC House that would allow North Carolina drivers to drive through protesters who are blocking the road without being sued, as long as they “exercise due care.”

It was introduced by Republican Justin Burr and “provides that a person driving an automobile while exercising due care is immune for civil liability for any injury to another if the injured person was participating in a demonstration or protest and blocking traffic.”

“As we’ve seen, time and time again, as folks run out in the middle of the streets and the interstates in Charlotte and attempt to block traffic,” Burr said. The Republican commented that he wants to ensure that “drivers don’t have to fear driving through Charlotte or anywhere in North Carolina.”

While North Carolina Republican lawmakers were quick to note that the bill speaks directly to those drivers whose actions are “willful and wanton,” Democrats in the state are concerned that it’s a free pass to mow people down in the streets.

“This bill does not allow for the driver of a vehicle to target protesters intentionally,” he said. “It does protect individuals who are rightfully trying to drive down the road.”

Democrats said the bill raises constitutional concerns because it applies only to situations in which the person hit “is participating in a protest or demonstration and is blocking traffic.”

“If you want to do something, you need to clear up the bill,” said Rep. Mickey Michaux, a Durham Democrat. “It basically is plain and pure unconstitutional.”

“I don’t know in what universe a person can run out in front of a car, and they’re going to win a personal injury case in North Carolina,” said Reives, who is an attorney.

You can read the full text of the bill here; the bill is now headed to the North Carolina Senate.

“I don’t know in what universe a person can run out in front of a car, and they’re going to win a personal injury case in North Carolina,” said Reives, who is an attorney.

The universe in which the nitwit doing the running can lie, of course. Particularly if they bring along a couple of lying friends.

notamemberofanyorganizedpolicital in reply to georgfelis. | May 6, 2017 at 4:17 pm

That happens every day.

That would be the universe that the USA is in.

Of course what the personal injury attorney failed to mention is that preventing these types of lawsuits impacts his business. He has a vested interest in seeing that any and all civil lawsuits are allowed.

Also not mentioned is that even if the driver wins a lawsuit, he’ll still be out thousands or tends of thousands in legal fees, not to mention the anxiety and stress defending the suit would cause.

In our sue happy culture, the process is the punishment…which is why so many companies settle suits to just make them go away, even if there’s a good chance they’d win.

I think a “loser pays” system would be the most fair way to get our legal system under control but the trial lawyers and their lobbyists won’t have it, so the next best thing is laws that immunize people against suit for actions that common sense says they shouldn’t be sued for. More like this please.

A useless bill. It still allows the blockage of traffic. And with the classic weasel phrase “exercising due care” it protects no one.

Actually, it has a pretty good structure to it. You (or the attorney representing you in the Civil defense) just has to have a good grasp of Civil Procedure:

The “Plaintiff” (or the Plaintiff’s estate) files suit for injuries suffered when you run them over for the fact that they started to attack/surround your car or block traffic while you’re lawfully driving down the road.

You file an answer, and immediately file a motion for Declaratory Judgment that you were “lawfully operating a motor vehicle, in conformance with the laws and regulations of the State of ________ (in this case, North Carolina), that the Plaintiff was engaged in a protest blocking traffic and was standing on the street (without a permit) and that but-for the Plaintiff’s unlawful acts in blocking lawful use of the street (and/or attacking Respondent’s vehicle), the Plaintiff would not have been harmed.

Declaratory Judgment in that there is no issue of fact to be resolved (Defendant was on the Street, engaged in a unlawful protest): Defendant wins.

Now, the Legislature SHOULD include a portion of this that says any Defendant who succeeds in successfully defending a Plaintiff action for this type of injury SHALL be awarded actual attorney’s fees and costs from the Plaintiff, and that any “protected” assets normally immune to seizure under state law are subject to attachment (house, car, retirement assets, student loan proceeds, anything normally “protected” from suit attachment).

Once these little monsters realize that you’re going to come and take their car, their big, flat-screen TV, their PS-4 or X-Box ONE, their I-Pad from their homes, and their Nike High-top shoes right off their feet, they’ll get the message REAL fast.

Should read “Plaintiff” was on the Street, engaged in an unlawful protest….

I appreciate that the State could define the disorderly blockading of a public way as an act against which deadly defensive force can be used. BUT, we all know the Democrats in Congress would demand and receive a Federal Indictment for a violation of Constitutional rights.

Federal Indictment for a violation of Constitutional rights.

This is why a “private individual” can break into your home, find evidence that you’re engaged in criminal activity, make a statement to the police regarding your criminal activity, the police can get a warrant, and the Search Warrant can be upheld. The Police didn’t violate your Constitutional rights, a “private citizen” did, and that person has ZERO constitutional liability for doing so, because they are not a “State actor.”

I forgot to ask – would you need to buy an NC hunting license with Tags for blockaders?

Unfortunately, it’s also the type of comment that those opposing this legislation are going to highlight to claim that this is just a method to allow those opposing the progressive protests to mow-down protesters without regard to their plight.

That’s because they have no sense of humor.

Unfortunately, our dem governor will veto this bill.

If you attempt to illegally detain me, you’ve become a threat to my freedom and my person. There is no constitutional right to hold me hostage while you throw your hissy fit. If you try and make it impossible for me to escape your detention, bad shit is going to happen.

The law should have included a provision for taking someone to the hospital, ER etc. Due care should have a better definition in such cases.

If you deliberately block a car which needs to get somewhere to save a life or obtain needed medical care, you have committed felony murder if the person dies. No excuse that you didn’t know someone in one of the cars was ill – That is the risk you take when you break the law solely to hurt and harass people.

Well, it should. People should be able to go about their lawful business regardless of those who deliberately stand in their way. Therefore anyone who has a lawful reason to drive where someone is standing, and has given that person notice of his intention to drive there, should be allowed to proceed, and if the person refuses to get out of the way their injuries should be considered self-inflicted, and they should also be liable for any damage to the car that hit them.

When you’re right, you’re right, Milhouse. I see this as akin to the laws against kidnapping. If someone prevents me from leaving a place, or attempts to force me to a place against my will, they are guilty of a crime.

By the same token I have a right to travel down a public road, or private road if I have permission, and proceed to my destination. And no one has the right to stop me.

It also brings the laws of man in line with the laws of physics. Somewhere I have the coloring book I made up for the aviators who comprised the air wing of the Carl Vinson, in which I explained the law of gross tonnage.

The aviators were and presumably are still good guys.

I learned my sense of humor from the same place Don Rickles did. In the Navy. It takes a certain sense of humor to be in the Navy. To always carry fresh batteries in you flashlight and a pocket knife to be prepared to go below and free your shipmates (I never had good guidance from the Big Navy on when it was valid to violate water-tight integrity and when you couldn’t).

To ride afloat what I used to affectionately call an industrial accident waiting to happen.

In my experience the A-7 drivers, the Harley drivers as they called themselves, were the most appreciative of the Rickles form of humor. Followed shortly by the fighter types.

And the aviators, most of them, could give as good as they got. I have no use for anyone who thinks, like the modern crybullies, they should be able to throw a punch without taking one in return.