Bruce Duthu’s statement sounds more like someone who is sorry he got caught, than a true repudiation of BDS. 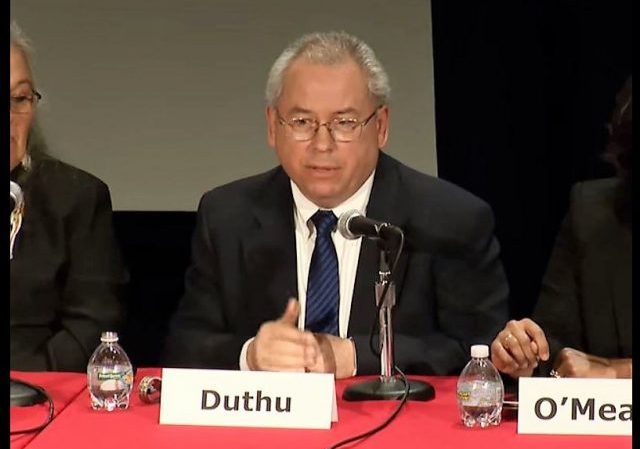 In that post, I questioned how Duthu could fulfill the duties of the position of Dean of Faculty in light of the sweeping nature of the academic boycott guidelines:

As you can see, the academic boycott guidelines are sweeping in their effect and implications….

Should endorsement of the academic boycott by Prof. Duthu in and of itself disqualify him from leading the faculty at Dartmouth? …

It’s hard to see how, if Duthu believed and believes what he was endorsing when he signed onto the academic boycott of Israel, he can fulfill the responsibilities of the position.

Academic BDS is anathema to the core values and responsibilities of a Dean of Faculty.

Apparently Duthu came to the same conclusion, that he couldn’t both support academic BDS and fulfill the responsibilities of the position of Dean of Students. He made the choice to keep his new position.

Algemeiner obtained a copy of an email Duthu sent to the faculty (image below), which reads (emphasis added):

I write in response to recent charges that my support of a statement issued in December 2013 by the Native American & Indigenous Students Association (NAISA) supporting the boycott of Israeli academic institutions should disqualify me from serving as Dartmouth’s next Dean of the Faculty. I continue to believe in the right of private citizens to express criticism of any country’s government policies. At the same time, I do not believe that a boycott of academic institutions is the appropriate response. Instead, I support sustained, open and collegial engagement with fellow academics, including collaborative research and teaching.

In 2013, President Hanlon issued a statement in which he made clear that Dartmouth will not support the boycott of Israeli academic institutions or academic boycotts of any kind. In my role as Associate Dean for International Studies and Interdisciplinary Programs, I have embraced this position and as Dean of Faculty, I will continue to fully support it.

The college is committed to difficult dialogues that are civil and respectful. Those values are often the first casualties in discourse that are particularly contentious, divisive or polarizing, such as the issue of academic boycotts or criticism of the state of Israel. My firm expectation is that contentious topics are discussed in the tradition of open and civil discourse that we have long maintained at Dartmouth. Let me also be clear, I condemn anti-Semitism. Prejudice or acts of bias directed at any person or group in the Dartmouth community are unacceptable and will not be tolerated.

Lastly, I wish to express profound thanks to the many individuals who have voiced their support, both privately and publicly, for my appointment as Dartmouth’s next Dean of the faculty. I appreciate your trust, respect and confidence. 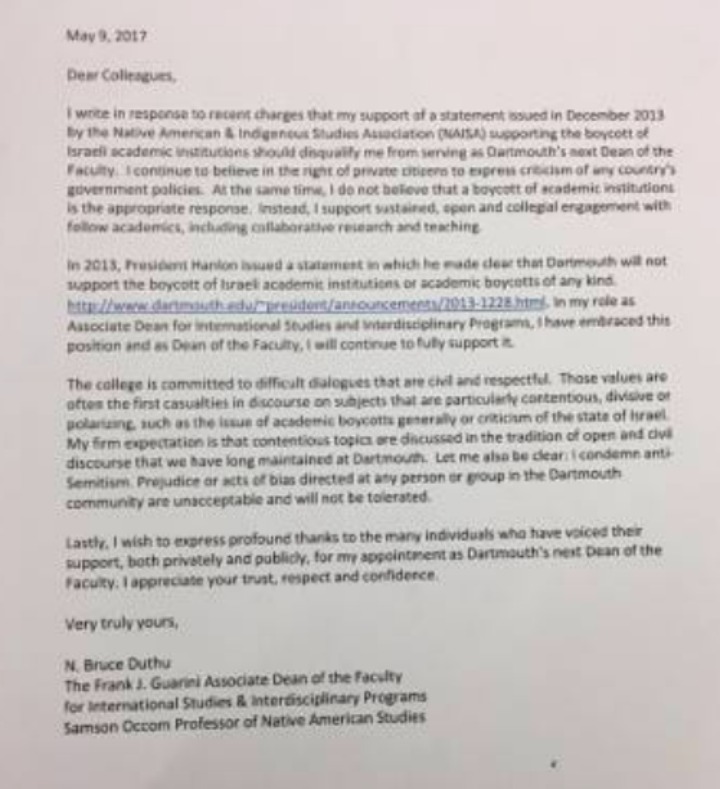 The Duthu renunciation has not satisfied one of the harshest critics of the appointment, Dartmouth Economics Professor Alan Gustman (his original statement is in our prior post). Scott Johnson at Power Line provides the text of Prof. Gustman’s response (emphasis added):

Professor Duthu’s statement to the Faculty does not reconcile his past support for the BDS movement with his current position that he does not support academic boycotts. He does not simply say, I withdraw my support from the letter I signed. He cannot, without contradiction, 1) assure council signers of the NAISA document and holders of their position of his continuing support for their document, which calls for action to boycott Israeli academic institutions, and at the same time 2) administer his job as Dean of the Faculty, while assuring Dartmouth, as his letter does, that he will not take such action.

Professor Duthu’s response to the Faculty is an attempt to avoid the anger his public advocacy of BDS has created without repudiating the reasons his positions created this anger in the first place. The BDS movement is anti-Semitic. The chant of the BDS movement, from the river to the sea, is anti-Israel, anti-Zionist, and profoundly anti- Jewish. It refers to sweeping the Jews out of Israel. Again, this movement has become a cover for many anti-Semites who like nothing better than to once again be free to exercise their prejudices. It also is important to understand, especially when evaluating the significance of appointing a BDS advocate as the Dean of the Faculty, that BDS is not just a statement of beliefs or a philosophical movement: it is a statement of action.

As Dean of Faculty Professor Duthu represents the Faculty of Dartmouth. If Professor Duthu wishes to quiet the anger he is hearing from faculty and Alumni, he must clearly and unambiguously repudiate his past support of BDS or give up his position and go back to the faculty where he can freely advocate for his beliefs – the view his letter implies that he continues to hold as a “private citizen”.

If he does not clearly and unambiguously repudiate his position and support for BDS, the anger directed his way will only get louder. In view of Dartmouth’s anti-Semitic history and Professor Duthu’s apparently continuing endorsement of the anti-Semitic BDS document, Dartmouth must not simply appoint Duthu to the position of Dean of the Faculty and ignore the implications of that appointment.

I think Prof. Gustman has a good point. Nowhere in his abandonment of his prior position does Prof. Duthu acknowledge the fundamental wrong he committed by advocating the boycott of Israeli academia at the time it mattered — when the American Studies Association (ASA) and Native American and Indigenous Studies Association (NAISA) were considering the boycott in late 2013.

Prof. Duthu also carefully limits his new position to academic BDS, which suggests he still supports the cultural and economic aspects of BDS.

It would have taken great courage for Prof. Duthu to stand up to his Israel-hating colleagues and to speak in favor of academic freedom even if he shared that hatred of Israel. Instead, Prof. Duthu took the easy route of going along with the anti-Israel academic crowd.

Prof. Duthu’s statement sounds like someone who is sorry he got caught, rather than sorry for the act itself.

If you consider that most University academics are in reality gutless worms who care only about their social standing and who will sign anything shoved in front of them as long as they’re told their office neighbors think they should sign it, then his actions both then and now make perfect sense.

“Words uttered under coercion are proof of loyalty to nothing but self-interest. Love of country must spring from willing hearts and free minds.

Prof. Jacobson, if you think that any of us are shocked by the verbal flip flops of someone in academia then you don’t realize how little respect we have for this bunch. In almost every case of progressive snowflake student rebellions, it is the lack of leadership from this group that encourages even more rebellion. They have no spines and no idea what leadership is. The academic world has become a living joke to most of us and there doesn’t appear to be any remedy in sight.

notamemberofanyorganizedpolicital in reply to inspectorudy. | May 10, 2017 at 11:33 am