MSNBC’S Deutsch: “Beginning of the End” for “Accidental Dictator” Trump

MSNBC’S Deutsch: “Beginning of the End” for “Accidental Dictator” Trump

Deutsch: “we are in very, very, very dangerous territory here” 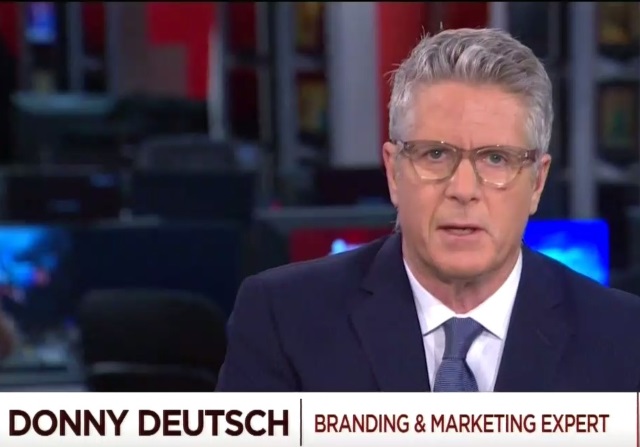 Talk about your doomsday predictions . . . on today’s Morning Joe, Donny Deutsch said “I believe this is the beginning of the end” for President Trump, whom he called an “accidental dictator.”

DONNY DEUTSCH: The optics I see is the guy who’s the accidental dictator. When I say accidental dictator, he never thought he’d be in office, now he’s in office. Doesn’t know how to behave any differently. When you contextualize this, versus, the press is the enemy of the state, let’s blow up the Ninth Circuit. I don’t know, the Senate and the Congress, I don’t know if that works any more. Alternative facts. Let’s ban the press from the White House, ban the press from the campaign, the press is enemy of the state. Let’s give states the right to round up immigrants. On and on and on. And his love for thugs.

This is a man that genuinely has behaved for 70 years one way, does not understand the office he has and actually behaves as a dictator. We can’t call it any other way at this point. Oh by the way, let’s imprison Hillary Clinton. We are in very, very, very dangerous territory here. In every way.

You feel it. I think everybody right now feels what’s happening. There’s a man sitting in that chair that is frighteningly ill-equipped to understand the office he’s in, to behave within the framework, and this is just the latest example. You can feel the thread being pulled. You can feel the clothes starting to come off the emperor. I believe this is the beginning of the end.

MIKA BRZEZINSKI: Yeah. I do, too.

donny deutsch… along with the msld gang should be examined for TDS.. trump derangement symptom.. they actually believe that they are the power…

At some point the nonstop propaganda and outright lies become ineffective. We know this because it’s already happened. That point was last November.

They are just here to amuse us now. Listening to the CPC has to even help people who are severely depressed. The crap they are pushing would make a corpse smile. The pharmaceutical industry must be taking a big hit. Of course, I do think T-Bone makes good sense, but Booker won’t listen to him.

These libs are nuts. Did Trump try to throw Hillary in jail after he was elected? No Donny. Does Trump have the right to fire Comey for any reason? Yep, Sorry Donny Trump has done nothing illegal. Donny, your boy Obama was far more a dictator than Trump.

These people are bizarre.

I wish they would secede so we could live outside of their alternate universe.