MSNBC Terrorism Analyst: If USA Were Third-World Nation, We’d be Watching for an Army Coup

MSNBC Terrorism Analyst: If USA Were Third-World Nation, We’d be Watching for an Army Coup 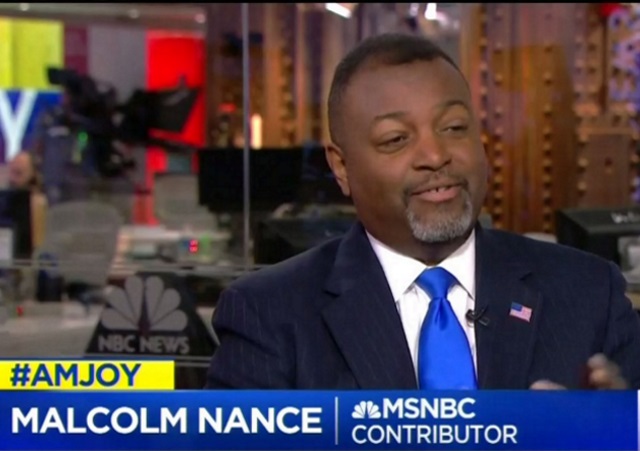 On Joy Reid’s show this morning, MSNBC terrorism analyst Malcolm Nance said that if the United States “were some third-world nation right now, we’d be watching the army to see if the tanks are getting ready to move for a coup. Or if a guy jumps on a plane and flies to Monaco with all the money from the state.”

Sounds like a “helpful” suggestion/wishful thinking from MSNBC. Nance, by the way, is the person who nominated a Trump property for an ISIS suicide attack. To date, there’s no evidence online that he has apologized or been disciplined by MSNBC.

MALCOLM NANCE: Initially, we give everyone benefit of a doubt that there is some grand strategy. That there is this plan being laid out and executed in super-villain style. We’re finding out that’s not the case at all. This is chaos. This is mayhem. This is a White House that has no internal organization, factions that are very clear and going at each other from one direction or the next.

And let me tell you, if this were some third-world nation right now, we’d be watching the army to see if the tanks are getting ready to move for a coup. Or if a guy jumps on a plane and flies to Monaco with all the money from the state.

Somehow I think that Trump has much more support from the traditionally conservative military than Obama ever had, and are much more likely to support Trump than be involved in a coup against him.

He says, regretfully. Why this idiot is wearing an American flag on his jacket I’ll never understand.

Part of the propaganda.

Remember, a traitor calling himself ‘Barack Hussein Obama’ (or whoever he really is) also wore it.

If this was a 3rd world nation, the entire staff of MSNBC would be missing.

And not just the staff of MSNBC.

I knew Malcolm Nance in the Navy. He is a dope. Ignore him.

I still can’t figure out how he got the tile of “expert.”

I have a pretty good idea, but it would be highly politically incorrect to say it.

I didn’t know him when I was in the Navy. But ever since I learned about his existence I’ve known without a doubt he’s an @$$ and and idiot. Please see my comment @ May 20, 2017 at 5:46 pm. I will only quote in part Nance’s @$$hattery on the subject of waterboarding.

“…In the media, waterboarding is called “simulated drowning,” but that’s a misnomer. It does not simulate drowning, as the lungs are actually filling with water. There is no way to simulate that. The victim is drowning.

Unless you have been strapped down to the board, have endured the agonizing feeling of the water overpowering your gag reflex, and then feel your throat open and allow pint after pint of water to involuntarily fill your lungs, you will not know the meaning of the word…”

This is a physiologically impossible description of waterboarding. Again, 10-20 percent of drowning victims have no water in their lungs. This is known as a dry-drowning. This could be because they experience what’s called laryngeal spasm. This theory is still somewhat controversial as many people who study drowning doubt that simply because the larynx will spasm when water (or food) tries to get past it to the lungs can protect anyone from aspirating water unless they’re rescued while they still have enough oxygen in their system to continue the laryngeal spasms. So while everyone knows 10-20 percent of drowning victims will have no detectable water in their lungs, many people reject the theory that’s due to laryngeal spasms.

But no one doubts that laryngeal spasms do exist, and simply the spasms themselves can mechanically damage the lungs. And if any amount of water does get past the larynx a whole host of other complications ensue. Fresh water will be quickly absorbed into the bloodstream resulting in a condition known as hemodilution. Then there are electrolyte imbalances, which are bad even in fresh water and even worse in salt water situations. The list goes on.

There’s a term that’s applied to anyone who has to be resuscitated or when there’s a reason to suspect any amount of water or any lung damage may have occurred after they’ve been pulled out of the water. It’s called a near drowning. And every single person who has experienced a near drowning is a hospital case. Because it may not be immediately apparent that the lungs have been damaged, but they can and will go rapidly downhill and die if they have damaged their lungs. This is called secondary drowning. You die as the result of effects of your near drowning which can best be described as the rapid onset of pneumonia-like symptoms as your lungs fill up with pulmonary fluid.

I’m not a medical professional nor did I stay in a Holiday Inn Express last night. But I did work closely with a guy who transferred into intel after working for years as a Medical Service Corps Diving Physiology Officer.

And Nance claims that the trainees he oversaw, and he himself, experienced “your throat open and allow pint after pint of water to involuntarily fill your lungs.” That’s an insanely stupid thing to say.

If Malcolm had more than one brain cell he would be intelligent.

I think there’s a reason Trump has so many military people in his cabinet and his staff. It’s to discourage a coup.

A friendly reminder of which side has the guns.

1) If our military were going to stage a coup it would have been done somewhere between 1/20/09 and 1/19/17.
2) Having people with actual relevant experience as advisors simply makes sense; no ulterior motives are needed.
3) OUR military state a coup? You have obviously never served.

What this yahoo doesn’t understand is that at least 90% of military members favored Trump in the election. The other 10%… There’s no way the military would remove Trump, they didn’t remove Obama and they’ll never remove a President.

He understands it – being a functionary in the Ministry of Propaganda.

If this was a third world country, this bozo would be in the same labor camp as crazy pelosi.

Did he notice our country become a banana republic under Obama? No, he did not. I’ve never been so embarrassed about out political figures and I’m quite old.

AndTrump is safe from military coup but not safe from attempted media coup of which this dope is part.

Have you ever stared into a mirror and projected right into it? No? I haven’t either. Just asking.

Lol! This guy knows nothing about everything. No wonder he’s on msnbc…home of fake it if you can’t find it.

Imagine if this guy had power over you of life and death? Or if anyone at msnbc did?

He would have fit right in at the Soviet NKVD – as would most leaders of the left.

This liar is no expert on anything. And how do I know Malcolm Nance is a liar? This:

“…Having been subjected to this technique, I can say: It is risky but not entirely dangerous when applied in training for a very short period. However, when performed on an unsuspecting prisoner, waterboarding is a torture technique – without a doubt. There is no way to sugarcoat it.

In the media, waterboarding is called “simulated drowning,” but that’s a misnomer. It does not simulate drowning, as the lungs are actually filling with water. There is no way to simulate that. The victim is drowning.

Unless you have been strapped down to the board, have endured the agonizing feeling of the water overpowering your gag reflex, and then feel your throat open and allow pint after pint of water to involuntarily fill your lungs, you will not know the meaning of the word…”

This is the most idiotic description of drowning I’ve ever heard of. Anyone who is familiar with the physiology of drowning knows approximately 30% of people subjected to a process Nance describes would die from a heart attack before any water entered their lungs.

And even a fraction of teaspoon of water entering the lungs would require hospitalization.

If Nance’s description of waterboarding was remotely correct, over half of very expensively trained Navy or Air Force SERE students would be killed or at the very least wind up in the hospital and perhaps medically discharge. Simply by going through SERE. But it doesn’t happen.

Why? Because Nance is a liar, and that’s a good way of making a living with an ani-American outfit like MSNBC.

That’s because in Third-World hellholes, the Great Leader has anybody who disagrees with him, particularly those in the press, taken out and shot.

When you notice the press giving Third-Word dictators all kinds of crap, it means the country is about to collapse, since the dictator does not have life-or-death power over the peons any more. Then the next dictator takes over, a large number of people get shot, and things return to normal.

In real Democratic Republics, the press has the right to state their opinions just as loud as they want without worrying about being shot. Of course, after they spew enough lies that nobody believes them any more, the people find other more-reliable sources of information, and the liars find themselves out of a job.

Nance is both right and wrong here.

He is correct that there is a coup attempt under way. He is incorrect to ascribe it to unallied factions within the government. The factions which are attempting to overthrow an elected President are very much allied. They are all part of what we call the Establishment.

People fail to under stand what Trump inherited, when he was inaugurated. At that time, Washington was entirely controlled and peopled by members of the Establishment. Trump ran as the anti-establishment. So, every hand in Washington is turned against him. Virtually every career politician or bureaucrat is going to be an Establishment stooge. EVERYONE of them.

The WH is in an uproar because Trump is pressing his agenda. What he should have done was ignore the attack dogs nipping at his heels and built his staff using only anti-establishment personnel. he then should have proceeded to people his cabinet and the higher levels of the government with anti-establishment people. He might not have a cabinet until 2019, but he can blame that on the Congress. At the same time he should remove all of the existing support personnel in the WH and replace them with people that he can trust.

This is not what has happened, though. Trump. not being a politician, decided to listen to established political people who have been leading him down the garden path. They are making him appear weak and incompetent. When he bulls ahead based upon his personal beliefs, he succeeds. When he follows his advisers’ advice and tried to “work” with the Establishment, he ends up failing and looking like a putz.

Until he decides that he is at war with the entire Washington Establishment, the media and Wall Street, and starts fighting as though his life depends upon it, he will continue to lose these battles. And, when he loses, so do we.

Malcolm Nance said that the Wikileaks emails were fakes “black ops”. What the fake moron didn’t know was each email is encoded proving they were authentic. Nance is obviously a lightweight.

Malcolm Nance on the Joy Reid show = a total lack of integrity, honesty, intellect and credibility.

A curse on neu-Nance’s head…….