Predictable: Republicans pretty much want to kill granny and children. 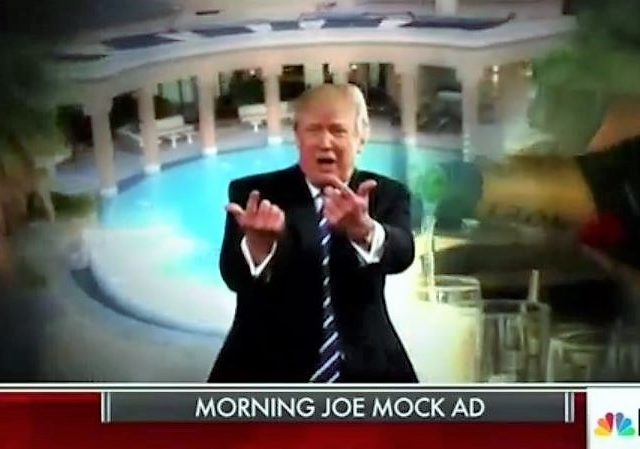 Scarborough said he told “the kids in the back that work for us” to “draw up an ad that will look like what we’re going to see next year.”

As you’ll see from the video clip, the ad is predictable campaign fare, focusing on the Republican health care bill. Pre-existing conditions coverage disintegrates. Medicaid is “slashed.” And, of course, “huge tax cuts for the rich,” with images of President Trump against a backdrop of yachts and mansions. The ad ends with the disclaimer: “not an actual ad, but probably will be.”

Indeed, we probably will be seeing such ads next year.

JOE SCARBOROUGH: The kids in the back that work for us. They’re out in the street playing stickball. I, kids, come on: Uncle Richard [Haass] has an idea. They’re jumping around the fire hydrant. They come back. They drop their sticks. They come up—and these kids, they’re really good. They’re really good. They came up with this 30-second ad. I said, draw up an ad, put down your sticks, draw up an ad that will look like what we’re going to see next year. This is what they came up with.

TRUMP:I am going to take care of everybody. Everybody is going to be taken care of.

ANNOUNCER: Donald Trump’s Republican party, bad for your health. Not an actual ad, but probably will be.

JOE: How about those kids?

This from the party that deliberately created a “health care” scam that was designed to destroy the health insurance industry, private hospitals and private doctors, then implode, forcing everybody into a single-payer system.

Too be fair, there is evidence that the medical product is overpriced. Obamacare avoided the audit and masked the symptoms. Lack of education and emigration reform, and a population that indulges in instant gratification, only exacerbated the issue.

The Donald is SOOOOO living in their heads rent free! 🙂

Poor Joe. I believe he has become totally —–whipped.

Partisan Joe. And the Lovely Mika. Barnum & Bailey Ringling Brothers may have ceased operation but the circus goes on in another form. They should invite the Singing Cowboy from Montana to warble on their show.

I bet he’s no Slim Whitman.

Not an actual ad, but probably will be.

I don’t know, the D’rats would have to be pretty dumb to hang their electoral prospects on any aspect of health care. They rammed the BamaCare disaster down our throats, and failed to suck the Republicans in to share blame for the disaster. And no voter who watched his insurance premiums triple under BamaCare will forget it. Uninsured Americans? All a person writing out those premium checks is going to feel about uninsured Americans is envy. Lucky stiffs, they don’t have to come up with a way to pay this damn bill!

There are some things the D’rats simply can’t run on … law and order … defense … and now, health care.

Trying to save the DNC a little cash by developing a blueprint….they need to be frugal.

Needs to be body slammed.

It’s time for the Right to admit the truth. We like our air smoggy and cancerous. We like our water filled with toxins. We enjoy eating babies while dancing on puppies.

Yeah, Republicans are pro-abortion and anti-conservation. Well, maybe some of them, some of the time. Beware overlapping and converging interests.

“Republicans pretty much want to kill granny and children…”

The irony is the DEMOCRATs pretty much want to kill granny and children – and everyone else. The media’s organ-grinder monkey, barack, was on that very mission:

Republicans may want to kill granny and babies, but it is Democrats who redistributed granny’s funds to prop up Obamacare and Planned/aborted babies. Also, not coincidentally, it is Democrats who oppose rights to self-defense, while favoring elective conflicts (e.g. wars). Oh, and they are rabid [class] diversitists (i.e. racism, sexism, “=”/congruence), too.

Affordable may cost less than “free”.

If Republicans want to kill granny then Democrats are cheering them on. Democrats just love those death taxes.

Uh, ok. So, will Scarborough or his network be required to register as a PAC or declare to the FEC the amount of this political donation?

Or are rules so last decade?