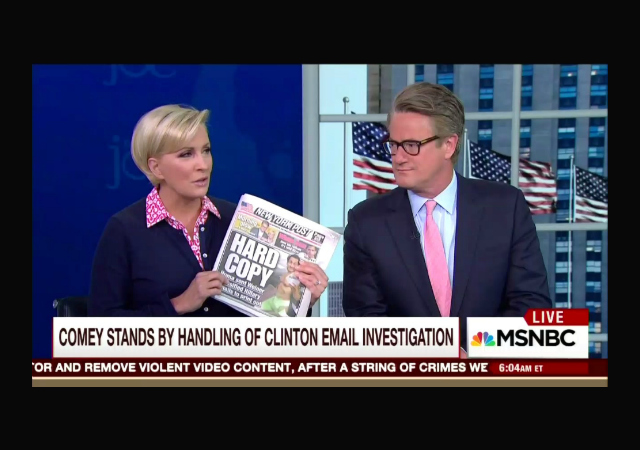 This isn’t the first time that Mika Brzezinski has said something critical about Clinton world. So maybe it was just a coincidence that on the day it became public that she and Joe Scarborough have become engaged, Mika took a real shot at the decision not to go after Huma Abedin for forwarding classified emails to her husband Anthony Weiner, ostensibly for the purpose of having him print them off.

Said Mika, “I don’t understand how Hillary Clinton’s e-mails are forwarded to Huma Abedin’s husband so he can print them out. What? What? I don’t know. Maybe there’s no law against it. Seriously, maybe there’s no law against it . . . It’s incredible. It’s everything that was wrong with the campaign.” When Joe said that in fact there was a law against it, and suggested the Clinton campaign thought it was playing by different rules, Mika concurred: “totally different rules.”

Later, former FBI agent Clint Watts came on the show and agreed with the suggestion that public officials are treated more leniently when it comes to mishandling classified information: “Absolutely. The more popular you are, the better the chance you’ll get away with it.”

Note: the New York Post article notwithstanding, Mika and Joe did not publicly announce their engagement, at least at the top of the show. As a proxy, a number of the panelists, tongue in cheek, expressed their “congratulations” to the couple . . . on Morning Joe‘s good ratings of late!

On a personal note, although I disagree with Mika on many issues, having followed her since Morning Joe‘s inception, I find her to be a very nice person and wish her and Joe all the best. Judging by Joe’s much-nicer-than-normal attire this morning, it looks like Mika is already having a positive sartorial influence on him. 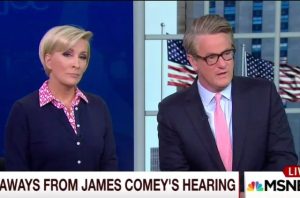 “it looks like Mika is already having a positive sartorial influence on him.”

Even while having a negative influence on his political beliefs.

That says it all!

But oh no, it was Comey who made her lose the election.

Judging by Joe’s much-nicer-than-normal attire this morning, it looks like Mika is already having a positive sartorial influence on him.

You can’t tell on TV. The socks would be the giveaway. If he’s wearing matching socks, then he’s almost certainly serious about her.

Tie, jacket, eyeglass frames … they could be symptoms of lots of things. Maybe he has a court appearance. But the socks tell all.

When Joe said that in fact there was a law against it, and suggested the Clinton campaign thought it was playing by different rules, Mika concurred: “totally different rules.”

Well, there you have it. The evil right wing thug, Joe Scarborough, has corrupted his intended, the once pure Mika Brzezinski; turning her into a brain dead conservative mouth breather who attacks Hillary without evidence.

The Clintons have ALWAYS thought and acted as though the rules do NOT apply to them- and apparently, they are right. As I understand it, “intent” is not a requirement for prosecution of mishandling of classified information. I always heard that “ignorance of the law is no excuse.”

Sorry, Mark, but Mika has always reminded me of “Mean Girls” or “Cruel Intentions.” Women can easily see through our own gender.

Ignorance of the law is no excuse. But apparently a high public approval rating is an excuse. And an effective one at that.

Oh no! Mika now sounds like one of Hillary’s evil misogynists.

Forwarding emails to weiner was ‘everything’ wrong? Everything?

These two: the deaf leading the blind.

Well, at least Anthony Weiner is someone handling classified info , that is in no Carlos Danger of blackmail.

The stupid. I burns. Yeah, Mika, we intel/natsec types missed the that one, about removing classified information from classified systems to email to your pervert husband so he could print it off and you wouldn’t have to on your DoS system.

These two clowns have no problem screwing America, so why not each other?

Meeka and Rino Joe Get Engaged:

“Some day, when things calm down, I’ll tell the real story of @JoeNBC and his very insecure long-time girlfriend, @morningmika. Two clowns!”
http://www.thegatewaypundit.com/2017/05/trump-right-joe-scarborough-mika-brzezinski-get-engaged/

They knew they were breaking the law but did not care. All the smart people, themselves included, thought with 99% certainty that Hillary would be the next president, so who cares about the law? What, would Hillary sic her Attorney General on Huma?

Same with Susan Rice and the unmasking scandal. Who cares if it’s illegal? I’m gonna be working for Hillary soon!

If congress summons the courage to issue a subpoena to Rice, I guarantee she will invoke the fifth.

Within a short time they’ll either call off the wedding or get divorced.

One of Hillary’s motives for running was to avoid prosecution and perpetuate numerous coverups for herself and Obama.