May Day demonstrations devolve into riots and chaos

May Day demonstrations devolve into riots and chaos

Olympia Police: “This mob is trying to harm people. We are engaging.” 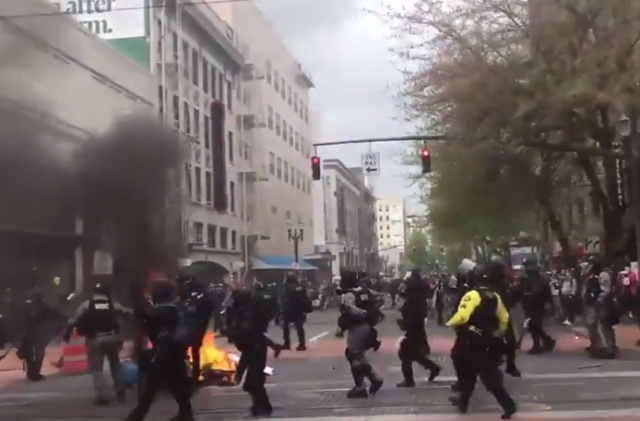 First, they staged “A Day Without Immigrants“, which went unnoticed by most hard-working, tax-paying Americans.

Afterwards, they staged “peaceful” demonstrations in support of the workers who would be hurt by illegal immigrants. Unfortunately, a few of those events turned violent.

Smoke bombs, fires were ignited, Molotov cocktails and other items were thrown at police during the rally in Portland, Oregon. Subsequently, the police cancelled the event permit after deeming it “a riot“.

Portland police arrested at least three people near Pioneer Square after a protest permit had been cancelled “due to actions of anarchists.” Police say anarchists destroyed a police car, set several fires in the street, damaged storefront windows and attacked police.

No injuries were immediately reported.

The mob even tossed cans of Pepsi at police, perhaps to mock Kendall Jenner’s infamous ad involving a riot being solved by the famous brand of cola.

Rocks, lead balls and full cans of @pepsi being launched at police. Officers will be donning personal protective equipment. #MayDay2017

In Seattle, police requested the crowd assembled for the May Day event disperse after 3 people were arrested. Police were additionally concerned that pro-Trump “Cowboys” were going to take on the “Black Bloc” group that was thought responsible for the violence at the Berkeley, California protest in February .

A man was arrested for throwing a rock just before 6 p.m. A witness said he threw it at President Trump demonstrators. Officers identified him as a 26-year-old from Olympia.

Police said a 30-year-old man was arrested for unlawful possession of a hunting-style knife just before 7 p.m.

A third person was arrested at about 7:45 p.m. Officers didn’t release details about the suspect or the arrest.

Supporters of President Trump, called the “Cowboys,” gathered at Westlake Park before 4:30 p.m. Shortly after, a group of “Black Bloc” protesters also arrived at the park. Officers separated the two groups after they began yelling at each other.

One Seattle resident took one look at the riot police that had assembled, and voluntarily dispersed himself.

Yet, because this is Seattle, the potential combatants did come to a peaceful resolution…over a joint.

In Olympia, Washington, protesters threw rocks at local police, and officers responded with flash bangs to move the crowd.

Arrests are being made after anarchists broke several windows in what Olympia police call a riot. Nearly five people are on the ground. Police are cuffing some of them with zip ties.

Protesters are smashing windows in Olympia. Four windows have been broken. Police have ordered protesters to disperse. Protesters who do not leave are subject to arrest.

Mob is breaking windows on businesses. Leave the area or be subject to arrest. This mob is trying to harm people. We are engaging

The good news is that these events did not descend into the level of violence reported in Paris, France.

May Day in Paris turns violent with images showing riot cops in flames as left-wing protesters rally against Marine https://t.co/3qXi1O2yzy

However, the “Black Bloc” and “Antifa” thugs seem to be revving up for even more violence during future events in this country.

Unmask these thugs!
Let’s see their faces! Give us their names!
Then lock them up.
Hopefully someone in the Trump DOJ is working on stopping these anarchists.

This has nothing to do with Trump. These May Day protests have been going on for decades and they always feature a “grievance du jour” among the usual all-inclusive grab bag of left-wing issues.

These May Day “celebrations” are very important to the Stalinists among us. They started out in Europe to celebrate the “workers of the world” and when Congress voted to authorize a holiday to celebrate the American worker, they established Labor Day and intentionally scheduled it in September to defy the communist movement in America that wanted it scheduled on May 1 in unity with the “workers of the world”.

So here we are. Here in LA, the hammer and sickles were there as they are every year. So were the Mexican flags, and anti-American flags of all sorts. We are sleep-walking into a Stalinist tyranny. We clearly are not voting our way out of it so commenting on blogs won’t get us anywhere either. It’s time to get out there and retake control of our own streets!

BTW, those politicans marching today are marching among those hammer and sickle flags. Does that not bother anyone? It’s not only the MSM that is not showing those pictures or telling this story, NO ONE IS!!!! Hello? This isn’t the first year! It’s been going on for decades!

Does anyone in the news business ever proofread??

“Nearly five people are on the ground.”

Was it supposed to be “nearby”, which makes sense, looking at the picture. Or were they “almost” five people? The picture has people on the ground and it is hard to tell if all parts are there, maybe someone is missing an arm or a leg?

Have a good day, everyone!

If you throw a Molotov cocktail at police, you deserve an immediate response of two to the chest and one in the head. You are not just a threat to property, but now to life and limb. Perhaps our law enforcement officials should stop worrying about what the jury/media will say but instead take lawful, appropriate responses. Ask the travelling hippies at Kent State what happens when you throw rocks and bricks at the National Guard…they’re unavailable for comment.

The city government and the chief of police need a good tarring and feathering for allowing this crap.

Charlie Martin at PJ Media has the right idea: On May Day we should remember the victims of communism, one hundred million of them in the twentieth century.

If we saw our politicians out there marching among Nazi flags, there would be no end to the public outrage. But communism has slaughtered people on a level several orders of magnitude greater than the Nazis and for some unknown reason, that’s okay. Again this year, I am not seeing this being reported anywhere. Everyone just writes “me too” commentary without doing any digging. No one posts the pictures or tells the story.

Maybe LI will find its spine and risk offending people and report ALL of the truth. This is worse than what is going on in Israel. It’s happening HERE.

Counts vary, but some are as high as 262 million across the world in the 20th century. Stalin’s Russia alone might be responsible for 100 million deaths.

The other salient point is that every single one of them was murdered by their own government, in an effort to bring about a socialist utopia.

They were not deaths in war, or natural disaster, or contagion; they were civilians deemed “undesirable” (or dare I say, “deplorable”?) by their governments, and “removed”.

In the words of Gerard Vanderleun: It’s a litany that proves, once again, that there are some lies that lodge so deep in the hopes of man that they can never be killed no matter how many are executed to make the lie true.

The march to communism has always left the communism at the entrance to the halls of power. Once inside the hall, it instantly becomes the most brutal dictatorship. One of Armand Hammer (friend of every Soviet dictator since Lenin till his death) was once quoted as saying that Lenin admitted to him during the early days that the Soviets were never communists. The Menshcoviks (Veit Russians led by Trotsky, Axelrod (Chicago baby!) and Martov)) that the Bolsheviks (Red Russians) defeated were persecuted and driven out of Russia mostly into Poland and Germany and from there, a great number fled to the US. And with it, communism. They remained organized everywhere they went. That is why the French resistance (for one) did not mobilize until Germany attacked Russia in WWII. They were communists.

Why don’t we know that? You can read about it but just TRY and tell the story in “polite” company and see what happens.

Afterwards, they staged “peaceful” demonstrations in support of the workers who would be hurt by illegal immigrants.

(BTW, I never use the word “Progressive” to refer to these people without putting it in quotes. If anything, they are anti-progress.)

“Progressive” is a label, not a descriptor.

Oh, look m1’s mom must have allowed him to reconnect the internet in the basement. I told you to use those dryer sheets.

In answer to your asinine question; It is probably scattered somewhere among your other delusions.

Leftist rioters breaking stuff that belongs to other leftists.

Pretty much the same in Seattle and Portland.

Rage on comrades!!!! The riots out in the nearby Yelm and Rochester areas were less enthusiastic.