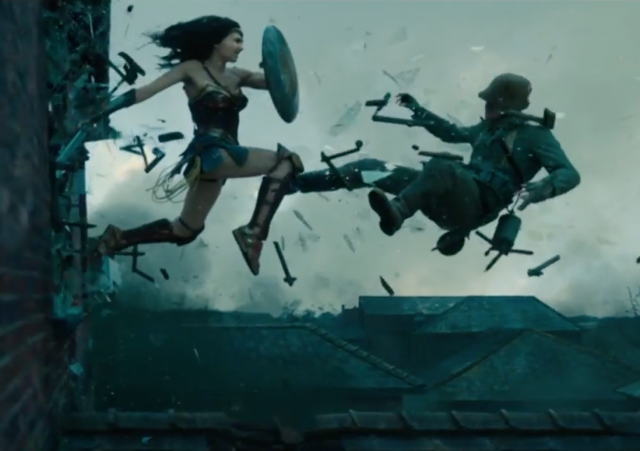 The proceeds of the screening were to benefit Planned Parenthood. It should be noted that Alamo Drafthouse hails from Austin, Texas, which is basically Portland, Texas, but without the rain and way too much cedar to be enjoyable.

We’re proud to be hosting #WonderWoman screenings for women ONLY (incl our staff) w/ all proceeds going to @PPFA! ????: https://t.co/ILueTsJH6R pic.twitter.com/LmmgAnmBcg

I know what you’re thinking — WHAT ABOUT THE NON-LADIES WHO THINK THEY’RE LADIES?

@PPFA Want to clarify these WONDER WOMAN screenings include any of our guests who identify as women as well.

Not only did Alamo Drafthouse make their Wonder Woman screening a ladies-only event, they specifically said, “No Guys Allowed”, which by the way, is illegal according to New York’s Unlawful Discriminatory Practices:

Alamo Drafthouse can’t legally host a women-only event in the state New York, at least not one in which they enforce gender restrictions.

Of all the internet rage, the AV Club‘s bitter rant is the most delicious:

As Miller has delighted in telling people irritated by his decision—in that “I am speaking calmly, so you must be the asshole” tone so beloved by internet trolls—there’s nothing illegal about purchasing a ticket to a screening. That argument does, though, gloss over the fact that, while barging into a space you’ve been asked to stay out of just because that request made you feel briefly tiny and weak doesn’t make you a criminal, it does make you an insecure piece of shit.

On the plus side, Miller gets to live with the comeuppance for his choices, i.e., having the kind of life where arguing for 12 hours straight with people on Twitter about your dumb, mean-spirited actions delivers some kind of awful inner satisfaction. Miller’s favorite tactic in his trolling is to refer to Wonder Woman as a “Chris Pine superhero movie” and pretend that star Gal Gadot doesn’t exist. (He also likes to lecture people claiming the film is a big step forward for female representation in pop culture, pointing them toward such milestones as Catwoman and Tank Girl.) So, yeah: Just an incredibly toxic and insecure little piece of shit.

The projection is almost too much.

“Mean-spirited” is the man who buys a movie ticket to a perfectly mediocre-looking lady movie (unless it’s a terrible chick flick like a film adaptation of the Vagina Monologues that becomes requisite viewing for all feminist males)! That’s probably a verse from the SJW Outrage Bible.

No one bothered to ask Miller if he’s attending the screening as a man who self-identifies as a woman. The heteronormative assumptions are flat out RUDE.

I’m so old, I remember when gender equality meant, well, ‘equality’. But we no longer live in a world where words have meaning, as this whole pathetic ordeal sadly illustrates. Because unless we care about and celebrate the accomplishments of male-only movies or projects, why in the world should we care about a fictional chick movie? SPOILER: No one outside of SJW Happy Fun Land gives two flips. And yes I know Wonder Woman has a strong female leading character (obvs) and was directed by a woman. I remain unmoved by this fact.

Being a female and accomplishing something a man already achieved thousands of times over is not praiseworthy. It’s repetitious, trite, and limiting to all femalehood that a very tiny portion of women believe replicating accomplishments to be groundbreaking. Ultimately, this kind of attitude lowers standards for female accomplishment rather than raising the bar.

We chatted with Miller about the incident and asked for his thoughts. He very politely indicated he’s not offering comments or responding to media requests because he has no desire to cause a scene.

Oh, and include women who want to be men.

Women who want to be men and have their women privileges, too. Transgender/crossover.

And, of course, men who have an unrealized female orientation or just want to be with women. Normal.

My God! What’s next? A guy sits down at a restricted lunch counter and wants to be served? Is this 1960 all over again?

That will eventually be the counter-swing to this foolishness.

You see it already regularly with the rejection of what the “Feminist” movement has become: a group of screeching old hags demanding attention that is both unwarranted and unrequited.

The “Feminist” movement has self-marginalized by the actions of those who have chosen to attempt to “lead” it, because they focused not on the betterment of Women in society, but on the nutty fringe divisive issues that require the denial of reality and the assignment of virtue/value to issues of moral dispute.

I have a great idea. Why not have movie showings where crying babies are not allowed in? Especially when someone thinks it’s ok to bring their infant to a movie like alien covenant.
I once went to see dodgeball with my wife and older teenage children. It was a golden moment for the family who brought their 2nd grade age kids to the showing when one asks “mommy, what is bondage?”
If a PRIVATE group wants to rent out a showing of a movie, cool. But do they really want gender discrimination?

And does the rental of that space, with the attendant selling of tickets, then run afoul of the local “public accommodation” statutes, depending on the State?

My guess is that is why this was a “request” that the sales be only to Women, and not a “You’re a man, we’re going to refuse you entry” sort of a deal.

Miller is playing this perfectly, because the moment he indulges in media (no offense) it becomes a cause to be scrutinized as a stunt. His responses are calm and reasoned “I’m just going to see a movie” “I’m just going to not bother anyone” playing anyone who reacts as the problem.

There was an internet meme a while back, right before the first “Guardians of the Galaxy” movie came out, that DC had delayed the development of “Wonder Woman” because the development team said “the world [was] not ready for a Wonder Woman movie.”

It was funny, because Marvel (at that time) was into their deep, third string properties for making movies, and was creating a movie that had a talking raccoon as a main character (it makes sense in the context of the movies for those of you living under a rock). Go watch the whole Marvel Universe of movies, they’re actually great fun. You can watch Guardians of the Galaxy pretty much by itself (it ties into everything else, but can stand alone).

I will go see Wonder Woman and have a good time enjoying it for what it is: a Summer popcorn movie. I hope it does well, because I generally enjoy super-hero movies.

But to claim it’s a big, feminist triumph? No. It’s DC leveraging it’s female comic-book drawings into the live-action format as a stepping-stone to a “Justice League” movie later this year.

Whoa, there. I see guns, swords, women in revealing outfits, lassos, explosions, and German soldiers getting killed right and left. It may not even pass the Bechdel test. (Well, maybe, since Paradise Island is full of guuurls and they have to talk about something other than boyz.)

This is a lady movie like Die Hard was a Greenpeace movie.

I was going to say, to a comment above, that a “males only” showing might not sell any tickets, but subsequent commenters prove me wrong on that.

Besides, I thought the Snowflakes believed that “gender” is a real thing and “biological sex” is a construct. What do they think they’re doing, limiting a movie showing to “women,” whatever those are?

Wonder Woman was created by William Marston who contributed to the invention of the polygraph test. Wonder Woman’s Lasso of Truth is a homage to his work.

Obviously written by men, since Wonder Woman as a character is simply a woman acting like a man, with the body and the skimpy clothes that men like.

And as far as that “Lasso of Truth” – what’s the effective difference between that and the Germans use of Scopalamine during interrogations? Oh, I know, when someone we like does it, it’s “good”.

Scopalamine? I see that is also called the “Zombie Drug.”

Now we know what the Demcrat Party puts in its Kook-Aid.

” In your satin tights, fighting for your rights……change your mind and change the world ! You’re a wonder, Wonder Woman…..” Too bad they didn’t keep the old theme song the way Mission Impossible did.

I think that Miller wanted the issue to explode on Twitter since he posted a picture of his ticket. He knew that NY laws support his case. He is just showing the hypocrisy of the left. Being calm just drives them battier.

If Alamo really wanted for this to be exclusively for women and provide a contribution to PP, then they should have gone to PP and arrange for a private showing event. PP could have even paid a nominal amount for renting the entire theater, which Alamo could have returned via a donation. Then the advertising is on PP, but they really could have increased the price of the event.

Alamo is donating “all proceeds”, but is it gross sales, including tickets, food and liquor? Or gross ticket sales? Or, net sales? Pre-tax or post-tax numbers?

It’s the law. Alamo Draft House can’t do this as it’s in clear violation of the law. Law suits have been won and damages have been collected repeatedly for violating this law.

Think it’s wrong? I have a lunch counter in Selma, Alabama to show you. We passed these laws out of fairness and American values. Now, these laws must be enforced.

Stephen Miller gave the SJWs exactly the attention they wanted, and they did him the same favor. I remain unimpressed.

Meanwhile, in real life, the United Nations appointed a comic book character, Wonder Woman, as honorary ambassador for the empowerment of women and girls, and then promptly withdrew the appointment due to the objections of Islamist-influenced countries.

Interestingly, they moved from the skimpy costume to racism as the objection.

Don’t the feminists blame Judaism for the patriarchy that is oppressing women all over the world AND since Gal Gadot was a member of the IDF, shouldn’t feminists be BOYCOTTING the film??

I’m just glad we live in a country that affords us the luxury of fretting about these sorts of issues.

He is deemed unworthy. Send him to Planned Parenthood.

I hope the feminists and the SJWs leave the WW movie alone.
Remember what happened with the all girl Ghostbusters movie?

They got their equality, now they want revenge.

Which is the main reason Hillary wanted to be President.

You forgot “and Gurls!”

Batman is by far the best superhero of all time. Michael Keaton and Christian Bale nailed it. But to be fair, Marvel has put a whooping on DC when it comes to these never-ending sequel movies. With this being a part of the terrabad Batman V Superman story and the fact that this one has feminists’ undies in a bundle, I think I’ll wait til it’s on cable TV and need something to fall asleep to.

Time for the President to mobilize the National Guard to end this return to segregation. He can take care of Empire State College. The Democrats are returning to their roots, fighting for racism just like their KKK ancestors.