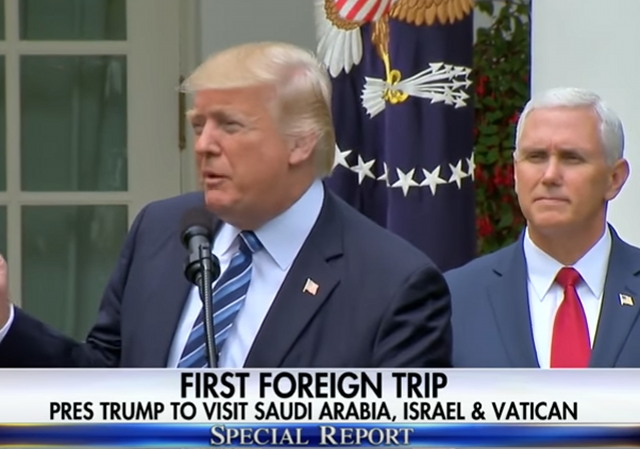 Donald Trump and First Lady Melania are set to visit Israel with Ivanka and husband Jared Kushner later this month as part of a three stop tour of the Middle East.

A massive effort for increased security is already underway in Israel.

A delegation from the White House and Central Intelligence Agency is heading to Israel to plan US President Donald Trump’s visit to Israel amid reports it plans to turn Jerusalem’s iconic King David hotel into a virtual fortress.

The delegation is set to arrive in Israel on Friday and stay until after Trump leaves the country.

Trump is set to arrive in Israel on May 22 for a one-day visit along with his wife, Melania, daughter Ivanka and son-in-law Jared Kushner, the latter two of whom also serve as his advisers.

Channel 2 reported that Trump’s first stop in Israel will be a family visit to the Western Wall in the Old City of Jerusalem.

From there he will head to a reception at the residence of President Reuven Rivlin.

Trump was then expected to visit Yad Vashem, Israel’s main Holocaust museum and memorial, an obligatory stop for all visiting heads of state and foreign dignitaries.

According to the Jerusalem Post, the Presidential Suite at the King David Hotel where Trump will be staying is virtually indestructible:

No Red Carpet at the King David for Trump

Historically, when a president of the United States enters the King David Hotel, the environment must be sterile – no red carpet, no management, no staff,” Sheldon Ritz, director of operations, who handles all diplomatic visits to the historic hotel, told The Jerusalem Post on Tuesday.

“We sit in our offices upstairs, watching on closed circuit TV as he comes come into our hotel – and we can’t greet him.”…

Confirmation that Trump would be staying at the King David was not received till late last Friday afternoon. It was widely believed that Trump would be staying at the Waldorf Astoria, or even the David Citadel which the Americans had considered as an option, but Ritz had been confident that in the final analysis it would be the King David, which he said “is the most secure hotel in Israel and easy for both the American and the Israeli secret service to protect.”

This description of the building gives you a sense of why it was chosen:

Ritz said that the hotel is set well back from the street, it does not have a glass frontage, and there are no buildings facing any of the luxury suites which overlook the capital’s Old City and all have unparalleled and unblocked panoramic views.

The most fascinating part describes the Presidential Suite, which protects occupants even if the rest of the building is destroyed in an explosion:

Moreover, the Presidential Suite is rocket-proof and has its own private air conditioning system to ensure that no poisonous gases can be passed through it. The suite is so rocket-resistant, said Ritz, that if someone were to demolish the hotel, the Presidential Suite would come down intact like a sealed strong box. Anyone inside might be bruised but not killed.

“A massive effort for increased security is already underway in Israel.”

And why is the effort so massive?

This is a question that the MSM will fail to ask.

Because the answer is one which they do not want to acknowledge, but is simultaneously an answer which they already know.

The answer is, ISLAM.

I certainly hope the Trumps don’t plan on putting on the hijab like Europe’s forward-thinking female leaders.

Trump needs to put the US Embassy in Jerusalem. Just do it. Find a secure building and put a sign on it, “US Embassy” and put minimal staff with adequate security. No ceremony, no fuss, just announce it as a fait accompli. Then let the Arabs overreact and look like idiots again.

Imagine Israel having to depend upon this president for anything.