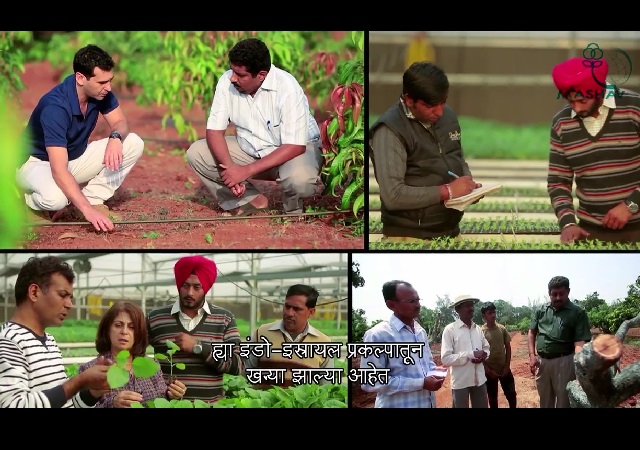 Away from the media limelight, away from the centre-stage of international diplomacy — a revolution is taking place. Today, Israeli agricultural technology is transforming the way millions of farmers across India cultivate and harvest.

Almost 25 years after the establishment of diplomatic relations, agricultural cooperation has undoubtedly emerged as the cornerstone of India-Israel ties. In 2008, Israel launched the India-Israel Agriculture Project (IIAP) aimed at setting up specialised agriculture centres across India. Today, 15 such Centres of Excellence (CoE) are operational in India, being jointly run by MASHAV, Israel’s agency for international development and India’s Ministry of Agriculture. Additionally, 12 more centres are expected to be launched in coming years, taking their number to 27.

In one such centre, located in the northern Indian state of Rajasthan, experts have come up with 24 new varieties of oranges created by combining the traits of selected Israeli and Indian varieties, promising high yield and longer shelf life. Indian newspaper The Stateman reports:

“We have developed these 24 varieties in the Indo-Israel centre of excellence in Kota. Most of them have already acclimatised to Indian conditions, and have shown good results in controlled conditions as well as in field conditions. Some of them have already been given to some progressive farmers who have indicated good results,” said Govind Srivastava, a senior officer of the Directorate of Horticulture. […]

The centre for excellence has been developed under the National Horticulture Mission and has been operational for the past two years. Farmers and horticulturists of the state are trained in latest varieties for citrus fruits. Besides saplings, the centre has also introduced state-of-the-art fruit grading machines, fruit processing unit, where any farmer can grade and process citrus plants at a reasonable price, Srivastava said.

These new varieties created in Kota are expected to hit the Indian market next year. “Kota’s Citrus Center of Excellence is one of 15 fully operational centres (jointly run by) Israel’s MASHAV and MIDH (Indian government’s Mission for Integrated Development of Horticulture) across India,” Israel’s envoy to India, Ambassador Daniel Carmon added on Twitter.

With nearly half of India’s workforce engaged in agriculture, modernising the sector is key to India’s secure and prosperous future. As India industrialises its economy, it urbanises its landscape. Ensuring food-security amid rapid urbanisation is just as crucial for India’s planners as national defense.

When Indian Prime Minister Modi visits Israel in July, agriculture will be high on his agenda. “The idea during [Modi’s] visit is to sign a joint action plan that will specify the exact activity that both countries are planning in these Centers of Excellence and ways to upgrade these Centers of Excellence in the next three years,” Gil Haskel, head of MASHAV, told Jerusalem Post recently.

Israel’s agricultural project in India has emerged as Jewish State’s largest engagement of its kind anywhere in the world. The success of local Centres of Excellence regularly attracts visiting experts from other countries, including groups from Africa. The project does not merely oversee the transfer of Israeli technology and solutions to India, but promotes joint development of crops and techniques in keeping with the local needs and challenges.

“With nearly half of India’s workforce engaged in agriculture, modernising the sector is key to India’s secure and prosperous future.”

What a great article. THIS is smart diplomacy in action. An alternate title would be ‘How to make friends and influence another nuclear power.’

An excellent article indeed and an effort I knew nothing about until I read it. Thanks to LI for bringing it to our attention!

Israel has shown the world how to make a silk purse out of a sow’s ear. The Palestinians could do it too if they can find a way to get over their hate.

The only thing these arab invaders can do is kill – kill – kill.
they kill Jews while denying that Jerusalem is the foundation stone of Judaism.
They kill Muslims who are a different sect.
They kill Christians just because.

There will NEVER be a fakeistan – Period.

See what happens when you stop listening or reading the leftist/globalist media? – Miracles happen.

Take a step away from the alternate reality/stench of the left, and step into the garden of reality – smells great in here.

From the land of Miracles – tonight starts the Holy day of Shevout and the giving of the Torah,
Enjoy the Cheesecake!

Music to my ears!