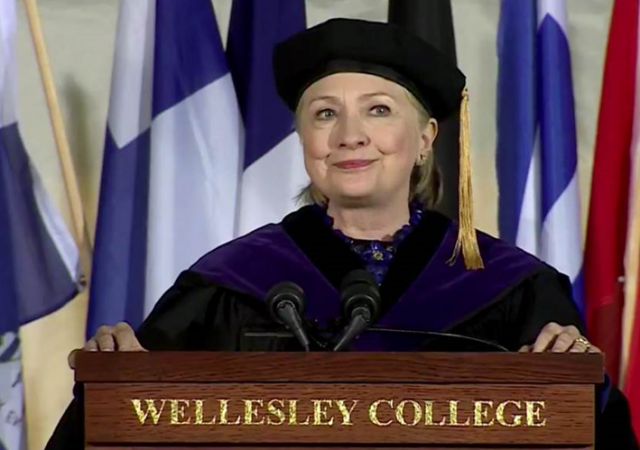 Hillary Clinton returned to her alma mater to give a commencement address that matched the tone and content of her 2016 campaign speeches: Full of attacks on Donald Trump and interrupted by coughing.

Hillary Clinton didn’t pull any punches Friday when she took several jabs at President Trump – at one point even comparing him to Former President Richard Nixon – as she delivered the commencement address at her alma mater, Wellesley College.

“When people in power invent their own facts and attack those who question them, it can mark the beginning of the end of a free society,” she said. “That is not hyperbole, it is what authoritarian regimes throughout history have done. … They attempt to control reality.”

…Although she didn’t mention him directly by name, the former first lady and Democratic presidential candidate called out several controversies swirling around the Trump administration. She compared his presidency to that of Nixon.

“We were furious about the past presidential election of a man whose presidency would eventually end in disgrace with his impeachment for obstruction of justice, after firing the person running the investigation into him at the Department of Justice,” Clinton said, discussing the sentiment on campus the year that she graduated.

It is obvious Clinton did not major in history during her stint at Wellesley. Richard Nixon was not impeached. Her husband, however, is another matter.

At one point, she indicated that chardonnay helped her cope with the shattering election defeat. Then, she proceeded to offer a litany of complaints about the “deplorables” and the man for whom they voted.

“You are graduating at a time when there is a full-fledged assault on truth and reason. Just log on to social media for ten seconds, and it will hit you right in the face. People denying science; concocting elaborate hurtful conspiracy theories about child abuse rings operating out of pizza parlors; drumming up fear about Muslims, minorities, immigrants, turning neighbor against neighbor and sowing division at a time when we desperately need unity. Some are even denying things we see with our own eyes, like the size of crowds,” Clinton said, taking a jab at President Donald Trump. “And then defending themselves by talking about ‘alternative facts.'”

The robotic, droning recitation must have been difficult to endure. However, one of the most uncomfortable moments would probably have been the mid-speech coughing fit, so bad that she needed some water and a throat lozenge.

Surprisingly, she did not blame this hacking on the Russians or President Trump.

After first trying to stifle the cough, Hillary eventually had to stop talking to cough. She was eventually handed a bottle of water by another woman on stage.

She then chalked up the cough to allergies.

Eventually the fit, which resembled those she had on the campaign trail, subsided and she was able to deliver her speech, in which she predicted Donald Trump would be impeached.

The then candidate had frequent coughing fits on the campaign trail last year – which she blamed on pollen.

The social media reaction to the actual speech is mixed, as one might expect. However, some tweets do stand out:

#Translation From flu to allergies, Hillary has an excuse for every coughing fit. https://t.co/kCy4xemtdt

President Donald Trump gave several powerful international speeches this week, including his wonderful “Drive them out” address in Saudi Arabia. Compare those addresses to this one, and imagine if Clinton had been the victor in November.

That thought alone has inspired me to pop open a bottle of chardonnay!

(Note: For those of you interested, the full speech can be viewed HERE).

This vile red harridan would shrivel up and vanish if someone would only throw a bucket of cold water on her. She is the most ignorant part of her political party’s ongoing sedition.

Allergies? I guess you can be allergic to lying compulsively.

What an uplifting speech.

Reminds me why I skipped my graduations.

“When people in power invent their own facts and attack those who question them, it can mark the beginning of the end of a free society,” she said.

In other words, the Dimocrat Party game plan.

Had the legal guild not failed us, history would be very different.

That sounds like the cough my nephew has out in Colorado. His cough is caused by the massive quantities of high grade pot that he smokes…

Where do you get this stuff if not from people around you?

She can take as many jabs at Trump as she likes. Her sycophantic audience can clap and cheer as much as they like.

The fact remains, she isn’t POTUS and Donald Trump is.

She had already lost two presidential campaigns where she lost both for the very same reasons. And these idiotic speeches serve only to confirm that she still hasn’t learned anything. I don’t think she understands that even her base finds her creepy these days. Only the media and Hollywood continue to protect her.

Gee, I don’t remember Romney taking advantage of any opportunity given to criticize the Obama administration after losing in 2012.

Meanwhile, yet another from her circle is arrested on child pornography.

Of course, she didn’t bring up her husband’s frequent visits to “Sex-fiend Island” owned by convicted pedophile friend Jeffrey Epstein.

That commencement speech was the epitome of hypocrisy and deceit. A perfect summary of why America hates these people and why it takes massive fraud and establishment collusion to keep them in our faces.

Wonder what she was paid for this feeble little whine-tasting party. Hillary doesn’t do anything that doesn’t have a pot of gold waiting at the end.

There was no cheese there either.

There are few things more pathetic than old people living in their own fantasy land.

The big picture in all this – aside from this disgusting, incompetent, corrupt human being’s pathetic and embarrassingly public rage at not being either president or again losing to obama in becoming the media organ-grinder monkey – is that Sessions is going to indict her. Mrs. Scummy Loser is trying to prepare from that.

But what difference will that make now?

This is going to be great.

BTW: would anybody here ever hire someone coming out of that s-hole of a nuthouse, Wellesley?

That “water” was probably Thick-It, as was probably the cup of water she was handed during an interview on her campaign aircraft. Recall that the cup was handed to her in exchange for a bottle of water already in her hand. BTW, Thick-It is a water thickening agent, comes as a concentrate or ready-mixed, and is meant to make swallowing easier for people who are losing motor control of their throats (like those suffering from Parkinson’s). Thickening agent supposedly turns water in a vile consistency that can cause someone to drink less water (both for the cause of the need for the thickener and the thickener itself). Remember that Hillary once boasted of her hydration habits, yet she complained about being dehydrated during the campaign and Huma was worried that Hillary had not been drinking enough (water, that is).

You will also notice the persistent bobble-head action going on. She’s obviously got a neurological disorder of some kind.