“can be seen in videos hitting people in the head” 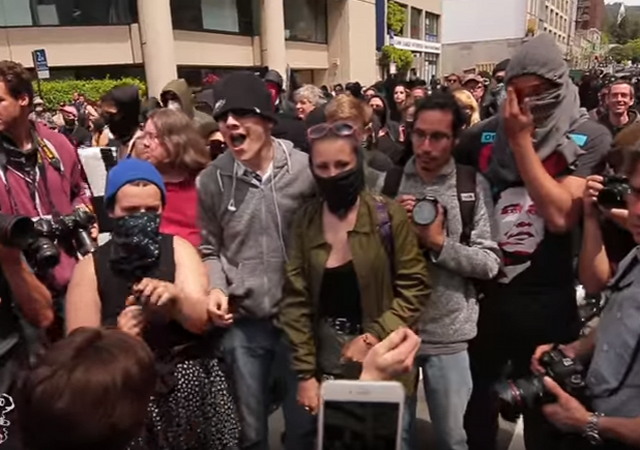 The incident has been circulated widely on the internet and is intensely violent. It involved the clubbing of an innocent man with a bike lock.

A former Diablo Valley College professor was arrested Wednesday in connection with the use of a bike lock in the beating of three people during a rally for President Donald Trump last month, police said Thursday.

Eric Clanton remained in custody in lieu of $200,000 bail at Berkeley Jail on Thursday and is scheduled to be arraigned at 9 a.m. Friday at Oakland’s Wiley W. Manuel Courthouse. He was arrested on three counts of suspicion of assault with a deadly weapon that isn’t a firearm and assault causing great bodily injury.

In a statement Thursday, police acknowledged that video of the incident, captured by onlookers and posted on social media, helped them identify Clanton as the suspect behind “several violent assaults” that happened April 15 during the demonstration at Civic Center Park on Martin Luther King Jr. Way.

Police confirmed Clanton can be seen in videos hitting people in the head with a U-shaped bicycle lock. Three people received “significant injuries” because of the beatings, police said.

Homicide detectives handled the investigation because of the seriousness of the assaults, police said. Investigators served warrants Wednesday at unspecified addresses in San Leandro and Oakland, the latter of which is where authorities took Clanton into custody.

He surrendered without incident, police said.