Former Obama Aide: At What Point Do We Consider Trump Admin a Threat Like ISIS?

Former Obama Aide: At What Point Do We Consider Trump Admin a Threat Like ISIS?

Mika wants people to think about Price’s question, and wonders “whether this presidency can sustain itself” 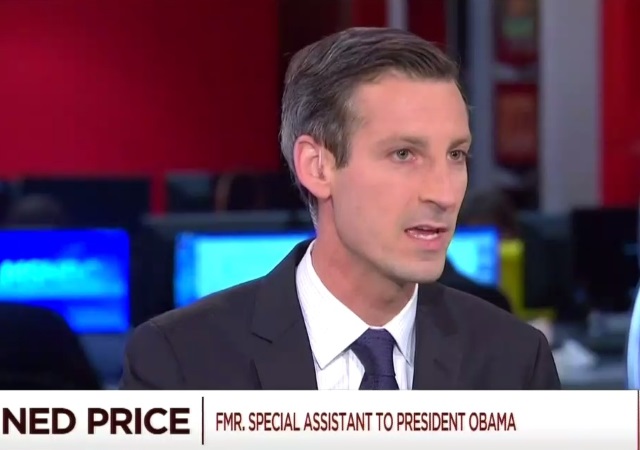 How are Dems playing their reaction to the news that President Trump shared intelligence information with the Russians during a White House visit? Judging by the statement from former Obama special assistant Ned Price, they’ve turned it up to 11. Appearing on today’s Morning Joe, Price said:

“Last week we had this hearing of all national security officials on worldwide threats. And of course, they covered ISIL, they covered Syria, North Korea. I think we have to start asking ourselves: at what point does this administration itself become a threat we have to be concerned about?”

Note that in addition to serving as a special assistant to President Obama, Price was a Hillary donor, a self-described progressive and a former CIA agent who quit the agency, explaining in a Washington Post column why he did so rather than continue to serve under President Trump.

Mika Brzezinski gave a charged reaction to Price’s question about putting the Trump admin in the same threat category as ISIS: “I just want everyone to think about the question you just asked, Ned Price. Because that’s where we’re at, where we don’t know whether this presidency can sustain itself.”

“Former Obama Aide: At What Point Do We Consider OBAMA Admin a Threat Like ISIS?”

There fixed it for you O. Veer Priced.

Yeah, one chops the heads off of infidels, rapes little girls, throws homos off tall buildings, blows up crowded public places, uses poison gasses on their enemies and vows to destroy the western world.

The other threatens to drain the swamp.

Totally equivalent. I see it, don’t you?

Lawd these Progs are some fucking retards. They keep on with the fever dreams and they’re going to get themselves another heaping helping of Trump in 2020.

It is progressive, or monotonic change, which is unqualified. It is a progressive liberalism, which is a generational divergence from the classical progressivism they claim to imitate.

The WE they are referring to is liberals. So keeping that in mind then I guess you can make the argument that Trump is a threat to liberals in the sane way ISIS is a threat to Christianity:)

Jesus, now they are saying Comey kept a diary and wrote down everything after every meeting with Trump and the day before Flynn resigned, Trump asked Comey to drop the case.

This BS is never going to stop.
I really do see a civil war coming
I will go bat $hit crazy when the RINOS opening ask Trump to resign for the “good” of the country.
I called McConnell today and sent an email, what a disgusting piece he is, said he was tired of the drama coming from the WH.

notamemberofanyorganizedpolicital in reply to gonzotx. | May 16, 2017 at 6:23 pm

I just heard that story – I wonder if it is a counter threat of if you release your “tape”, I’ll release my “journal”.

I would believe recorded voices over a handwritten summary of meetings.

As though Comey can’t write down lies in his journal…

Or, create them after the fact.

The well known precedent would be Joshua L. Steiner, the Treasury Secretary’s chief of staff, regarding Slick Clinton and his wife and Whitewater. When confronted with his diary in congressional hearing, he said he lied to it.

Yeah, I can see the diary entries.

I, James Comey, went to the White House to have lunch with President Trump today. The manacles seemed to be holding much better this week, and I took my turn gently spoon-feeding him mashed potatoes while reminding him that he was President of the US, not the USSR, which he frequently tends to regress into, complete with shouting bursts of frantic Russian phrases and begging for the red button…

Then Comey lied under oath. He stated no one tried to stop the investigation under oath long after his meeting with Trump. It’s also not illegal for Trump to fire Comey or give him a recommendation. There was no crime charged and even according to the memo Comey wasn’t ordered to do anything.
Trump could have pardoned Flynn, just like Clinton pardoned Mark Rich and there is nothing anybody can do about it.

that’s impeachable so why didn’t comey take it to justice? yates was heading it up at the time. and why did mccabe testify to congress, no interference from WH on russia investigation?

They have been looking for a plausible narrative since day -100 to deem Trump not viable in order to justify his abortion. They keep going on baby hunts, only succeeding to expose a lot of witches.

The “Twink” is strong with this one.

notamemberofanyorganizedpolicital in reply to NotKennedy. | May 17, 2017 at 12:19 pm

CNN claims they knew the source of the intelligence and were asked not to report it. If this is the case, EVERYONE from Kim Jong-un to the lowest ISIS member on the totem pole knows it as well.

There’s a good reason why intelligence from Israel isn’t attributed to them publicly. If we ask a country like, say… Saudi Arabia to assist us by changing procedures on flights or running future missions, we’re not going to get a lot of cooperation if their citizens believe they’re doing the bidding of Israel. This is common sense folks, something progressive and apparently Never-Trumpers, lack. They are the useful idiots of this century.

Just looking at his picture reminded me of wringing chicken necks when I was a kid.

A cone and a cut to the jugular is a bit tidier and lets the chicken bleed itself out. I don’t miss pluckin’em. Murray’s has lots of new machines to make life easier 🙂

The smell after they were dunked in the hot water…..ewwww! The headless chickens flopping around the back yard is kind of like the MSM now.

Question—At What Point Do We Consider Trump Admin a Threat Like ISIS?

Answer—when they saw your head off.

Personally, I can’t wait for the video.

The threat she, and her loony lib buddies, should be concerned about is the one that’s going to be coming from all the red counties in this country that voted for Trump, and that are sick of these non-stop bull$hit attempts to take him down.

Who advertises on that show?
Tell me now. I’ve already quit going to Target and quit buying Kellogg’s.

I also dumped Netflix when one of their writers tweeted “F*** white people.”

So just tell me. We’ll watch their income decline. They’ll learn, just as Target is learning.

This will give you some insight on how to cut their “water” off.

At some point in time, these people “crying wolf” will turn off the majority of the Americans. If something significant does happen, many of us will just not listen.

In other news, per the WH website, on the 15th, the US Trade Rep Lighthizer was sworn in, met with National Peace Officers and honored the fallen police by lighting the WH with blue lights, met with the Crown Prince of the UAE. On the 16th, Trump had a call with the King of Jordon, met with Turkish President, signed a required continuation of national emergency with Iraq and sent nine more nominations to the Senate. He’s sent 22 so far this month.
https://www.whitehouse.gov/1600daily

After he returns from his Middle East & European visits, Trump should start getting a bunch of reports from his cabinets, at least the 90 day reports of the status of regulations, unneeded committees & staff. Hopefully, they also start mentioning what regs they are requesting turning back or legislation to change things in the swamp.

I am anxious for Pruitt to announce how many commissions, councils, regs, etc are not supported by an act of Congress and should be disbanded.

The real problem here Liz is that Liberals are screaming blue murder so much and so loud that when something of REAL national importance takes place everyone will be so tone deaf as to completely miss it…the end result will be dead bodies that COULD have been avoided had the media not been so heavily invested in inciting hatred against Trump and the right.

This little weasel now knows how we felt about obama.