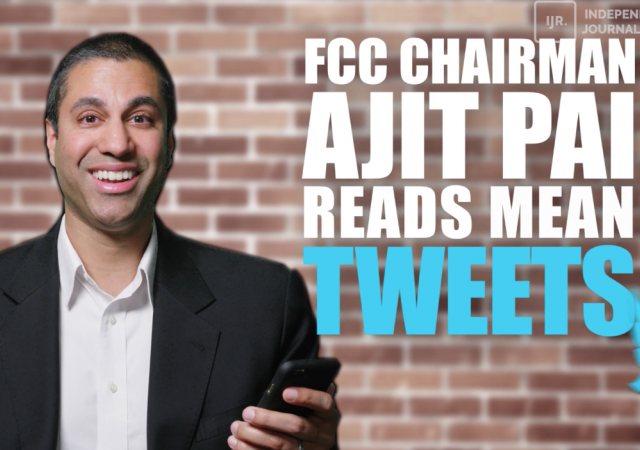 Federal Communications Commission (FCC) Chairman Ajit Pai has been targeted by radical leftists for his stance on net neutrality.

The 44-year-old son of Indian immigrants is an Obama appointee who was elevated by President Trump to serve as the Chairman of the FCC in trying times. Pai has quickly been catapulted into the limelight during the infancy of the Trump administration. His swift and calculated rollbacks of Obama policies, including a marked pivot on key elements of net neutrality, has landed Pai in the crosshairs of some of the biggest critics in the cable news and media sphere.

Not that Pai seems to mind.

The perpetually candid chairman seems to bask in his nerdiness. He dresses like a tech bro, tweets Big Lebowski lines, and drinks out of an oversized Reece’s peanut butter cup coffee cup. The last bit, along with the commission’s 180-degree pivot on net neutrality, left Pai on the warpath of one John Oliver.

The HBO late night host savaged Pai over his net neutrality stance in his most recent diatribe on Sunday. In the segment, Oliver deployed a troll army against the FCC in order to crash their commenting function on the net neutrality move. It’s a tactic Oliver has used successfully before with Pai’s predecessor.

The video might be witty and funny, but, the alt-left is organizing protests in Pai’s neighborhood, hoping to intimidate and pressure the FCC Chairman into bending to their whims. From the Free Beacon:

Members of the alt-left with a history of participating in violent protests are targeting the neighborhood of the Federal Communications Commission chairman Ajit Pai.

The organizers, connected to DisruptJ20 and Code Pink, said they are “taking the fight to Pai’s front door,” leaving leaflets on the doors in Pai’s neighborhood last weekend to protest changes to the Obama administration net neutrality policy.

On Sunday, the activists will again target Pai’s neighborhood, this time with a “vigil to save the Internet.”

“Join us this Sunday for a #SaveTheInternet #NetNeutrality vigil outside of FCC Chairman Ajit Pai’s house,” a Facebook event organized by “Protect Our Internet” reads.

“THIS IS A COMPLETELY LEGAL ACTION. PROTECTED BY THE FIRST AMENDMENT,” the invitation notes.

The organizers, who are connected to PopularResistance.org, which features several members of the antifascist (antifa) campaign, said the vigil would be a family friendly event and “perfect” to celebrate Mother’s Day outside of Pai’s door.

“We will stand on the sidewalk outside of his house,” the invitation read. “Bring signs, slogans—bring your mom, your kids, your friends and family!”

“This is a perfect Sunday Mother’s Day action to expose #PaiLies and continue the fight for an open, accessible internet,” it said.

Members of the alt-left were behind the first leaflet campaign at Pai’s doorstep. “Have you seen this man?” the leaflets read, with a photo of Pai.

“Seemingly unphased (sic) by the hate…”

That’s why I quit Twitter; all the woke SJWs who never lerned how 2 spel in skool thinking they could teach me something.

He’s an impressive young man with a lot of promise. We’re blessed to have a real American working for us instead of that last freaky woman.

You realize the “last freaky woman” was Tom Wheeler — a man?

I doubt any of the trolls on Twitter even understand so-called “Net Neutrality”, which is an IMMENSELY complicated topic.

But if you’re going to decide where to stand based on hearsay and one-line logic, try this: The vast majority of people who support “Net Neutrality” are bureaucrats, policy makers, and various others with a vested financial interest in “Net Neutrality”.

On the other hand, the vast majority of people who OPPOSE “Net Neutrality” are techies, who understand how the transfer of data over the Internet actually works.

“THIS IS A COMPLETELY LEGAL ACTION. PROTECTED BY THE FIRST AMENDMENT,” the invitation notes.

It is up to a point. Making excessive noise late into the night, or getting too loud/raucous/threatening becomes harassment, disturbing the peace, among other offenses, even if they never step foot on his property.

Try doing the same thing near the Obama walled mansion or near any of the MSM reporters houses. The MSM would cheer as you are brutalized for using your First Amendment rights.

Like I said, it is protected up to a point.

Where that point is seems to depend — far more than it should — on whose house you’re protesting.

Ok, I hadn’t watched this until now, it’s hilarious.

Idea: what is the best time to have Roto Rooter come out and clean out your septic tank? Yup.