But does this mean people will spend more money? 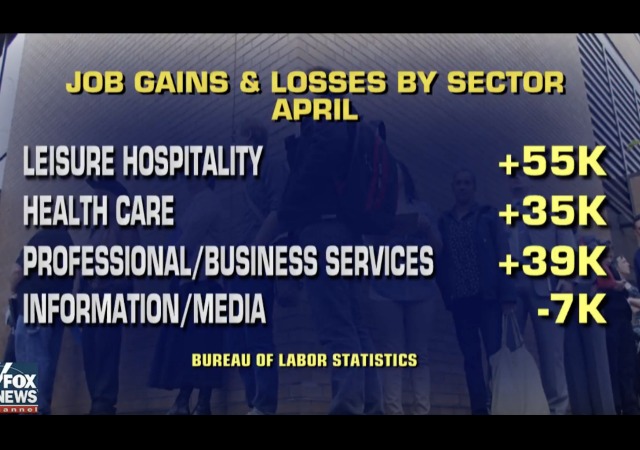 The U.S. economy received a huge boost in April after it added 211,000 jobs and unemployment dropped to 4.4%. That’s the lowest unemployment number since May 2007. From Fox News:

In an encouraging sign, the number of part-time workers who’d prefer full-time jobs has reached a nine-year low. That trend suggests that many employers are meeting rising customer demand by shifting part-timers to full-time work. During much of the economic recovery, the number of part-timers remained unusually high, one reason why steady job growth failed to produce sharp gains in pay or consumer spending.

The shift to more full-time work has also helped reduce a measure of underemployment that includes people who aren’t counted as unemployed: They are the part-time workers who want full-time jobs as well as people who have given up their job hunts.

The jobs report stated that those who had part-time jobs for economic reasons “declined by 281,000 to 5.3 million in April.” Overall, those employed part-time “has decreased by 698,000” in the past 12 months.

The report has also encouraged economists that the economy will continue to grow after a rough start to the year. From The Financial Times:

“Today’s employment report should have brushed aside any concerns about the health of the US labour market that may have come up after the disappointing payroll number last month,” said Harm Bandholz, chief US economist at UniCredit Research, who pushed up his expectations for the next rate rise to June from September.

Meanwhile, Goldman Sachs economists added that the fall in the jobless rate to 0.3 percentage points below the level that it sees as normal in a properly functioning economy “confirms the risk of labour market overheating”.

David Berson, an economist at Nationwide Mutual Insurance, told The Wall Street Journal that the numbers suggest “that consumers will have the wherewithal to increase spending in the second quarter.”

It’s interesting that Berson says that because let’s be honest here. The GDP is still the only number that matters. All the jobs and employment do not matter if people are not spending and pumping money back into the economy.

The GDP from the first quarter grew only .7%. From Fortune:

In addition to warmer weather holding back spending on utility bills, the slowdown also reflected a cutback in restocking of store shelves. The slowdown in inventory rebuilding cut nearly a percentage point from growth in the first quarter. Also acting as a drag was a reduction in government spending, which fell at a 1.7% annual rate with both the federal government and state and local governments seeing cuts.

On the positive side, business investment rose at a 9.4% rate, helped by a 449% surge in spending in the category that tracks spending in the energy sector. This category had seen sharp cutbacks in recent quarters, reflecting reductions in exploration and drilling as energy prices declined.

Inventories. That’s a key word because of April’s jobs report:

The strong report gives ammunition to the Fed to raise rates when they meet in June. From The Financial Times:

Since the data may provide more fuel to hawks on the Fed’s policy-setting board, Goldman lifted the odds it has handicapped for a rate increase in June to 90 per cent, from 70 per cent previously.

Wall Street investors took a similarly confident view that the data released on Friday strengthen the case for the Fed to add to its March rate rise when it meets in mid-June. The probability of a rate increase next month that is implied by federal funds futures contracts rose to almost 100 per cent, according to Bloomberg data, from 93.8 per cent on Thursday, and 69.7 per cent at the start of the week.

The odds had begun to rise on Wednesday, after the Fed said that the slowdown in first-quarter economic growth to the weakest pace since 2014 was probably temporary.

Hey, it’s about time the MSM was dead and buried.

Everyone knows Zombies work for nothing anyways…….

Here in Atlanta, the Atlanta fish wrapper published this good news about the unemployment data by saying that “Employment ticks upward”. Ticks? It is the lowest in ten years and this is a tick? The msm will NEVER give Trump credit for anything and I guess I might as well accept it.