“The reality is that in Connecticut we get most of our money from very few people.” 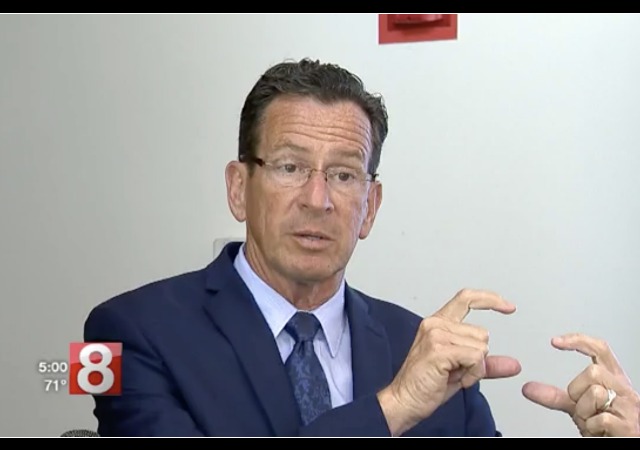 Connecticut Governor Dannel Malloy did the unthinkable for a Democrat: He admitted taxing the rich does not work. The state has witnessed “two high-end tax hikes in the past six years.” So the wealthy in Connecticut have done what any sane person would choose to do: LEAVE.

It’s happening because the state of Connecticut depends too much on its wealthy residents, and wealthy residents are leaving, and the ones that are staying are making less, or are not taking their profits from the stock market until they see what happens in Washington.

It’s been ten full days since the April 18th tax filing deadline, and workers at the state tax department are still processing returns coming in the mail. Even though about 90 percent of all Connecticut residents file electronically, many still send their checks for taxes due in the regular mail. It now looks like expected revenue from the final Income filing will be a whopping $450 million less than had been expected.

“Next year it looks like our first year budget, fiscal ’18, now instead of having a $1.7 billion deficit to address, it’s now about $2.2 billion,” said Senate President Pro tem Martin Looney (D-New Haven). And it has a major impact on the current budget year that ends in just two months.

Connecticut has collected $235 in its “Rainy Day Fund” for emergencies. Somehow officials need to “find $215 million in the next few weeks just to balance the books on the current year.” WTNH continued:

Governor Malloy added, “The reality is that in Connecticut we get most of our money from very few people and that can produce some very wild swings.”

The Governor is calling for an immediate hiring freeze and review of all current spending and will meet with legislative leaders from both political parties in a sort of first round budget summit early next week.

Stats have shown that “the income tax paid by Connecticut’s top 100 taxpayers this year fell by an astounding 45 percent compared to last year.”

So exactly how will officials solve this crisis? Very simple: SLASH THE BUDGET.

“We need to take immediate action to reduce spending between now and June 30 to reduce our current-year deficit as much as possible to prevent the need to borrow to meet expenses. We also need to develop new, additional approaches to further reduce spending in order to balance the budget for the years ahead,” said Ben Barnes, Malloy’s budget director. “Our budget, which already demanded painful choices, has just become about $600 million worse in FY18 and $864 million worse in FY19. We cannot afford business as usual.”

Malloy told reporters that officials have no plans on borrowing money. After all, he said, the state is “pretty good at clipping expenses.”

Yeah…that’s why your state has no money.

Republicans leaders stated that they have warned the state government that the high taxes would force out the rich. The Hartford Courant continued:

Members of the Connecticut Hedge Fund Association recently testified to the legislature’s finance committee that high-profile, Greenwich fund managers Edward Lampert and Paul Tudor Jones have moved their operations out of Connecticut to Florida for tax reasons. Lampert and Jones are two of the best-known managers in the investment business.

House Republican Leader Themis Klarides of Derby said a few departures at the highest levels can have a disproportionate impact.

“All it takes is a couple,” Klarides said. “Everybody isn’t leaving. We’re all here. But it doesn’t take that many — when you’re relying on high earners to that extent. … It matters if a couple of people leave.”

The Democrat Senate President’s name is Looney…hahaha. On a more serious note, why can’t the elected clowns in DC come to the realization that they have to slash the budget as well?

if they slash the budget, they won’t be able to buy votes or campaign donations…

after all, it’s not as if they can run on their records of looking out for their constituents.

what the state needs to do is pass a law making it illegal to move your business.

I know that you are joking, but California actually tries to do something like that by trying to tax you even after you leave. I know several people who moved their businesses completely out of the state and had no customers in California [deliberately] and were being dunned by the state for imputed taxes and penalties years later. Given that all the islands of the Clinton Archipelago [look that map up, it explains much and makes you bless the Electoral College] are in that kind of financial shape, I expect that kind of law to be tried.

Is it an accident that the word “Crazy” and Connecticut, California and Colorado all begin with the letter C. Dang it, now I have created a totally new science. Hopefully Bill Nye will embrace it and take it to it’s logical conclusion like only he can.

The pattern works for Cuomo, Clinton, Chelsea. And since B and D surround C, I’ll include de Blasio as well.

The difference is that Colorado has the TABOR Amendment (Taxpayers’ Bill of Rights) which serves to keep our budget a little more in check. They are constantly trying to get around it, but thankfully, to no avail. If we didn’t have this, I’m afraid we’d be like every other (Denver/Boulder at least) leftist fiscal mess.

Our fiscal year starts July 1st. Right now for FY18 and FY 19 combined they are forcasting a $ FIVE Billion deficit.

What do you want to bet that in the Fall ’18 elections everyone still sends the same Democratic majority up to Hartford, somehow expecting the same people to get different results?

Connecticut didn’t have an income tax until 1992. Had to have one because the state needed more money!! Now they have one, and sales tax has gone up, and the state need more money! The one constant I see is that the state needs more money, as it becomes less and less able to do the core things expected of a state government. Good roads. After that, most everything a state does is extra. And often unnecessary.

Rhode Island had a sales tax, but no income tax. Then the state ran in the red for two years (I believe it was in the 70s), so they instituted a “temporary” state income tax. Within a couple of years, the state was back in the black. In about eight years, the budget went from under .5 billion to 1.5 billion. And, yep, the state still has a “temporary” income tax and a sales tax, both doubtless higher than they were when the income tax was instituted. “Temporary” increases to the sales tax have also become permanent since that time.

In June of 2015, the state legislature passed an 8.67 billion dollar budget for the smallest state in the union.

None of them can be trusted. They are all lying sacks of shit.

When Connecticut instituted the income tax Hartford promised us they would be lowering the sales tax significantly. It had been 8%, and I don’t think they ever dropped it below 6%. It was recently raised to 6.35% and now they are talking about 6.99%. I’m not sure why they don’t say 7 unless they think we are all to stupid to realize that that .01% won’t make any difference.

There is no such thing as a temporary tax.

Unfortunately ECON 101 is taught at a reading level about 10 grades above that of your average Dim voter.

About 2 years ago, New Jersey had one of its very rich move to Fl. and their Assembly had to redo the state budget. There is only so much that can be asked of the Golden Goose(s).

The fiscally illiterate Dumb-o-crats are incapable of comprehending basic financial concepts, such as that if a tax environment is made sufficiently onerous and oppressive, businesses and deep-pocketed individuals who have the means to flee such an environment for more fiscally-friendly climes, will.

They’re right about smoothing functions (e.g. welfare). They are wrong that it is a sustainable solution.

As for redistributive change, affordable in a capitalist (i.e. organic) economy may cost less.

That said, moral, natural, and personal imperatives. Go forth and reconcile.

To be fair, FL probably makes its money off the tourism industry. CT not so much.

If this is the source, then that is how it should be. People from other states choose of their own free will to travel to Florida and leave their money there in exchange for some benefit, most likely warm weather and selfies with Mickey Mouse. Free market magic.

And by this time next year as the elections are ramping up malloy and looney bin will be extolling their prowess on saving the state from economic catastrophe. Bet on it.

So many votes to buy. So few revenues.

We got a bond commission that will borrow any amount for any cause….