This is why Trump won. 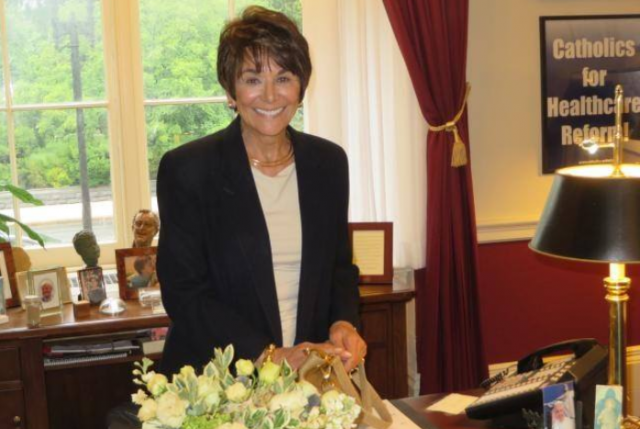 In the wake of President Donald Trump’s election, a big can of crazy has been opened and our state’s political leaders have all taken a big swig then passed it around.

Now it is being reported by the Washington Free Beacon that the a Congresswoman representing the area around Silicon Valley has revealed her true feelings about a the rest of the nation.

A Democratic lawmaker from California referred to Middle America as “Podunk, USA,” during a committee meeting last week, several sources inside the meeting told the Washington Free Beacon.

The moment occurred when Eshoo pushed back against Pai when he was discussing expanding broadband access to rural areas.

Pai said that eliminating Title II net neutrality rules would benefit places he has traveled to, such as Parsons, Kan., Elverson, Pa., and Cadillac, Mich.

Sources inside the meeting told the Free Beacon that Eshoo was frustrated with Pai’s comments. She wished out loud that Pai would stop talking about “Podunk, USA” and instead be more concerned about the venture capitalists on Sand Hill Road in her district near Palo Alto, according to the sources.

To give you a sense of the depth of her thinking, here is Eschoo’s recent assessment of President Trump’s tax return “crisis”, which was offered at a recent townhall.

During his campaign, Trump claimed that because he was being audited, he could not release his tax returns. “There’s no such thing as being under audit and not being able to put your tax return out,” Eshoo told her audience. “It’s just a fib. A big fat fib.” The Internal Revenue Service, according to Reuters, has said that “nothing prevents individuals from sharing their own tax information.”

Granted, she is far more lucid than Maxine Waters on the subject of President Trump. So there is that.

Eshoo has been a progressive activist for quite some time. She was Chair of the San Mateo Democratic Party between 1978 and 1982. Given that she beat the Republican challenger for her seat by over 30 points, she has no need to worry about the next election. However, this attitude is likely to inspire backlash voting by the “deplorables” in “Podunk, USA.”

In fact, President Trump appreciates how much the support in Middle America meant to his election. It appears that he may be planning to hang the Electoral Map 2016 in the White House as a reminder to his staff, the media, the Democrats, and his supporters about how important “Podunk, USA” is to him.

Trump plans to hang a map of his electoral college victory in the White House, report says https://t.co/BaO3coEYEi pic.twitter.com/IuEhynJ4Bh

One America News Network White House reporter spotted the framed map being carried through the White House by a Trump staffer.

“Spotted: A map to be hung somewhere in the West Wing,” the reporter tweeted.

Trump has often brought up his election victory over Hillary Clinton in the months since he took office. In April, the Washington Post’s White House bureau chief reported that Trump had asked the Post to run the election map on the front page of their newspaper.

I will simply note that this is in contrast to Trump’s selfie-taking predecessor, who had over 2 million photographs of himself taken during his 8 years in the White House.

Given how crazed California’s Democrats have become since last November, there is little wonder that Eshoo demeaned Middle America.

Thanks, Anna, for all the tolerance and respect! No wonder the rest of the nation is eager for us to #CalExit.

Seems about right that an elected official mirrors the viewpoint of the constituents who elected her. But the bigger picture is grim for the Democrats because they are so coastal/urban-centric. To me that’s why they have so desperately clutched the “racist” meme more tightly and have made it an obsession. It must be they think that is their last salvation to win any extra needed votes outside of the NE and far West.

notamemberofanyorganizedpolicital in reply to casualobserver. | May 15, 2017 at 2:35 pm

Agreed. But the Demcrat Party is even loosing that.

Suburbia is all hip and cool now – it’s all the rage – with Millenniumals.

I like what President Trump is doing with the “map” idea.

It should be placed on a wall that the major staff need to walk by DAILY with a routinely changing sticky-note from POTUS on it that he WILL ask the staff about on a random basis. They need to be constantly thinking “how do I serve THOSE people out in the middle of the Country that are normally ignored by the elites.”

Make sure they’re LOOKING at that map. The staff need to be thinking about exactly what that “middle-America” needs / sent Trump to the White House with the intention of doing. Because if they don’t accomplish those goals (or at least make marked progress toward them) this is going to be a very short experiment.

A better map would be the precinct-by-precinct map found at: http://ijr.com/2017/04/841803-stunningly-detailed-2016-election-map-just-released-democrats-scared-scared/?utm_source=Facebook&utm_medium=Owned&utm_term=ijamerica&utm_campaign=ods&utm_content=Politics

This map shows that a lot of counties that show up “blue” actually are dominated by the large cities therein. There’s a lot more “red map” country out there.

notamemberofanyorganizedpolicital in reply to Oregon Mike. | May 15, 2017 at 2:41 pm

Thanks Mike. Great article and maps!

“The huge change in the maps can be underwrote from an economic perspective, as well. As IJR recently reported:

According to economic expert Stephen Moore, writing in the Washington Times, the reasons Americans are fleeing these states are all driven by economics — namely, that they share the progressive values of “high taxes rates; high welfare benefits; heavy regulation; environmental extremism; high minimum wages.”

Make in the day, ESAD was a popular response.

I bet it annoys Rep. Anna Eschoo to no end that my vote counts just as much as hers.

But it shouldn’t she believes. She was born to rule. Just listen to her. And your vote gets in the way.

Condescension is an attractive character trait.

Who knew that Catholics favored the 1%, the status quo, and [unqualified] progress.

Out here in Podunk Center we find comments like Mrs. WhoCares made are amusing. We pray they don’t change their minds and decided to invade our little bit of heaven, because they would just screw it up.

“We pray they don’t change their minds and decided to invade our little bit of heaven, because they would just screw it up.”

Oh, yeah. Our little version of Podunkville consists of a (geographically) large conservative county with a small town that is filled with hippy liberals. Unfortunately, the small town draws liberal Californians who can’t afford to live in California anymore but are too stupid to figure out why that it so. We have to play a bit of “Whack-a-Mole” to contain their stupidity. So far, the good guys are winning pretty handily, but it is an ongoing concern.

And now, everybody understands why our forefathers decided to have an Electoral College as part of our election system: rich, self-entitled people with political connections cannot be trusted with more than a small slice of political power.

The Democratic Party has been drinking its own Kool-aid, to the point that a lot of them actually believe their slanders. They have demonstrable contempt for everyone that doesn’t agree with their Whim of the Day, and even those who do agree, if they aren’t a member of their Party, or live in their preferred locations.

They have been encouraging violence, and using violence, against other Americans since at least the last Clinton Campaign. It backfired then, and it is continuing in that vein.

notamemberofanyorganizedpolicital in reply to Valerie. | May 15, 2017 at 2:49 pm

“….rich, self-entitled people with political connections cannot be trusted with more than a small slice of political power…..”

Many of the elected officials here in fly over country look at their constituents as unwashed rubes, useful for tax payments and votes. Pat them on their head, throw a bone here and there, patronize the crap out of them. Just make the payments on the townhouse in Georgetown. Wait for that high paying lobbying job!

If there was an amendment to the constitution changing who qualified to be counted on the census to legally resident in the country, would the Democrats be so in love with illegals?

Hate to break it to you, Leslie, but people who live in Podunk USA refer to it as Podunk USA. I should know. I’ve lived there. No one from Podunk is egotistical enough to think about it differently (read: have vastly more important things to think about). Just like the article here about The Donald having two scoops of ice cream, who cares? Call a redneck a redneck, and he’ll beam with pride. Kids who live in Podunk rarely refer to it (wherever Podunk happens to be that particular moment in time for those individuals) as a “beacon of civilization that’s near and dear to me”.

Ah, but this is a case of: I can insult my best friend, mother, wife, whomever all day long, but as soon as you do, you’re name is Mudd.

You’re dead on with that, Fuzzy!

Congresswoman Whatshername might want to reconsider her use of what she believes to be hyperbole; some of the people who live in the actual towns with the name Podunk might not appreciate her denigrating their towns. Of course, Whatshername is too dull be realize there are actual places with that name, isn’t she? (And too “elite” to care?)

I am gonna have to go with former FBI Comey on this one: The key to this language crime is intent.

Eshoo meant it to be a demeaning insult, so she was called on using the term…as she should have been.

It is that intent to be insulting that leads to things such as Trump’s surprise victory.

Funny,
We no longer worry about what Leftists hurl as their insults, given that to be effective, there has to be a bit of truth behind an insult.

So welcome to “Podunk” … Home of the Deplorables!

And we get to hurl one right back at ya, you coastal elitist shmuck. And ours actually has a grain of truth it in.

What an obnoxious face, huh?

This witch is of the ilk that led the lesser-intelligent SS troops who murdered Jews and Russians as ‘subhuman.’

Rep. Anna Poop would probably have done well in Mao’s political murder machine, as well as the Khmer Rouge’s.

This is no joke anymore. Leftist elites are indoctrinating their followers to view political opposition as worthy of killing. We have to call it what it is – or one of those little student weasels proudly strutting around with the communist logo will be murdering one of us, if not many of us, at the behest of the likes of Rep. Anna Poop and Sen. Camel Harris.

Wellesley College’s student newspaper put out a call to ARMS against anyone who engages in alleged “racist” behavior:
https://heatst.com/culture-wars/student-newspaper-of-hillary-clintons-alma-mater-openly-threatens-those-who-refuse-to-adapt-their-beliefs/

Ironic as this is this Prof. J. @Cornell resides about 15 miles from a recorded area known as Podunk in the northeast part of Tompkin’s County, the only Democratic County in the 11 County Republican Congressional Dist.

If that sweet lady from California ever gets lot and comes to town, I’ll be nice and buy her a cold coke. That is unless she comes on Sunday. The feed store is closed then.

So, Eshoo. Greetings from Deporables in Podunk USA

Kamala doesn’t know her hole in the ground from Hillary’s…..