“It’s an attitude of self-righteousness” 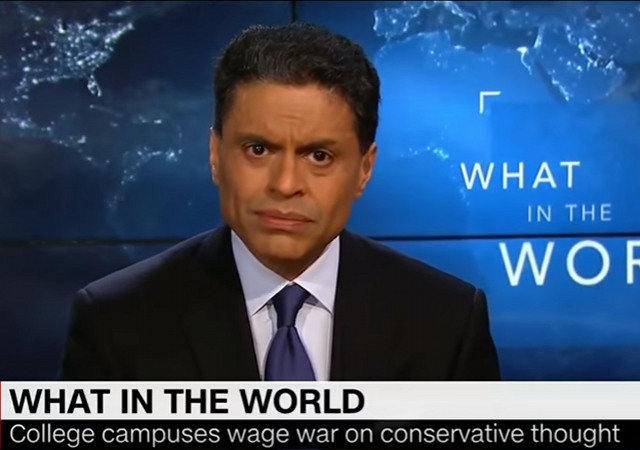 You know things are bad when even someone as far left as CNN’s Fareed Zakaria has noticed that liberal college campuses have a problem with tolerance, free speech and diversity of thought.

In a report a few days ago, Zakaria pointed out what many of us have been saying for months.

Fareed Zakaria said Saturday that though many liberals think they are tolerant, often they aren’t.

Zakaria noted that “at the height of commencement season,” many new graduates across the country had made their political views apparent, from the Notre Dame students who walked out as Vice President Mike Pence gave his commencement address to the crowd members who booed Secretary of Education Betsy DeVos during a speech at Bethune-Cookman University.

“American universities seem committed to every kind of diversity except intellectual diversity. Conservative voices and views are being silenced entirely,” Zakaria said.

The CNN host said he found this attitude strange, especially given that these incidents occurred on college campuses that “promised to give their undergraduates a liberal education.”

“The word liberal in this context has nothing to do with today’s partisan language, but refers instead to the Latin root, pertaining to liberty. And at the heart of liberty in the Western world has been freedom of speech. From the beginning, people understood that this meant protecting and listening to speech with which you disagreed,” Zakaria argued.

That means, he said, not drowning out “the ideas that we find offensive.”

In addition, Zakaria noted what he called “an anti-intellectualism” on the left.

“It’s an attitude of self-righteousness that says we are so pure, we’re so morally superior, we cannot bear to hear an idea with which we disagree,” he said.

“Liberals think they are tolerant but often they aren’t,” he added.

As you can probably expect, many people on the left didn’t like Zakaria’s message.

@CNN @FareedZakaria Conservatives are an "oppressed minority" huh? That's really the angle you want to go with, @cnn?

@CNN @FareedZakaria Giving hate and ignorance a speaking platform is one thing. Allowing it to rule is another. Civil disobedience is a liberal concept.

@CNN @FareedZakaria These young people are frustrated bc conservatives are holding the US back. The speakers that were boo'd are the ones spreading hate & fear

The cure for Leftism? Leftists on camera. What eventually stops Leftists? Casualties.

This guy should interview Prof. Weintstein from Evergreen College. That would make some lefties come unglued, eh?

Liberalism is unprincipled. Discover your principles.

Progessive liberalism is degenerative. It’s a generational thing that recycles every few generations.

Wrong. Shutting down hate speech is not betraying Liberal values.

You have ask…if liberal/progressive values are so obviously superior, why aren’t they universally recognized and accepted?

Why do they feel like they have to browbeat people into accepting their values?

Why aren’t they universally recognized? Because those people who don’t genuflect towards their wisdom must be EVIL!!! and must be destroyed, of course.

And that’s why “leftism”, left unchecked, always ends at the gas chamber, the guillotine, and the crematorium.

For those on the Left, everything is political. That is why you rarely see Lefties (and Democrats) criticizing misbehavior on the part of their own. They either see such misbehavior as totally justified, or they see that any criticism by them will be used by conservatives against them.

The former is probably the majority opinion, but the latter is why some totally freak out when someone like Zakaria says what he did.

Yes, it is unusual for a liberal to notice that there’s nothing liberal about Liberalism. And even more unusual to admit it.

The_Donald, over at Reddit, has come up with a new and profane term for the faux Liberals described by Fareed Zakaria. Mr. Zakaria is not supportive of conservatives generally, and he probably thinks of himself as an only-slightly-left-of centrist, so his commentary points to an emerging awareness that the rancid behavior of the leftists is inappropriate.

There are a LOT of posts at T_D, particularly those defending the deliberately misunderstood alt-right, condemning Liberals and liberalism. The attached commentary invariably includes a few people pointing out that Liberalism is about liberty, and not the current behavior of the ill-mannered radical left. So, a new term is emerging, “sh!tlibs.” It means the same thing as faux Liberals, but has more appeal to the 14-25 year-old-male demographic.

What is it about boys and their fascination with dirty words?

notamemberofanyorganizedpolicital in reply to Valerie. | May 30, 2017 at 4:38 pm

You just haven’t been around Leftist/Prog women enough then.
Snark.

What is it about boys and their fascination with dirty words?

Could be worse … they could develop a mania for parading around in pussy hats.

The problem, dear liberals, with outlawing hate speech, is,
put simply so that even you can comprehend it, that the term
“hate speech” cannot be objectively defined. Methinks that you Progressives (progressing to where????) simply assume, that it would be you, who would get to define hate speech and that us poor, irredeemably deplorables would simply have no say in this.(As it should as well be, say you, since you are so much smarter)

On an aside: The handful of killings that occurred last year within the ranks of the DNC are totally unrelated to the Clintons, you tell us.
I want to believe, but it’s hard:
Some fifty violent deaths in the last 30 or so years of people connected with them. In the vast majority of cases, the deaths of these people benefited the Clintons and the Arkansas Princess still feels she can get away with talking of a “vast right-wing conspiracy”, as she bloviated just the other day again.
Lock her up!
AND THROW THE KEY FAR AWAY.

notamemberofanyorganizedpolicital in reply to frankiefrank. | May 30, 2017 at 4:37 pm

“Some fifty violent deaths in the last 30 or so years of people connected with them….(AND)….the deaths of these people benefited the Clintons….”

That many beneficial deaths ain’t no conspiracy I tell ya. SNARK!

(Methinks the Clintons must apologize to doctors. Before it was thought doctors were the only people who could bury their mistakes.)

I am starting to believe that the progressive Left and ISIS are becoming very similar: they both espouse an ideology that must be force-fed to opponents, at the point of violence, if necessary.