Schieffer wasn’t “normalizing.” He was doing what reporters are supposed to do: report. 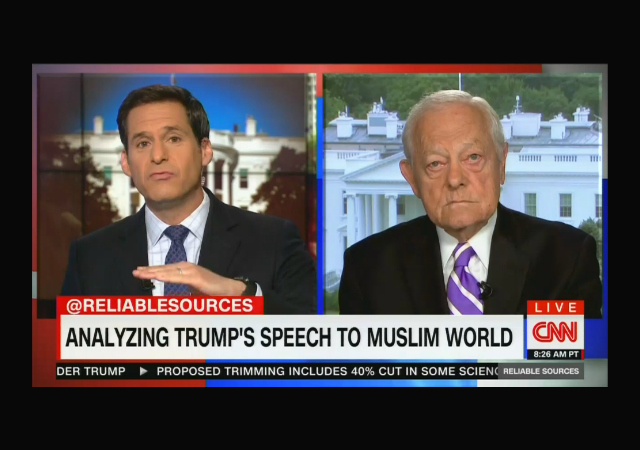 Bob Schieffer is an old-school newsman. There’s no doubt that the former Face the Nation host leans left, but he is still capable of reporting, you know, the news. That is too much for denizens of the modern MSM to tolerate.

On today’s Reliable Sources on CNN, Schieffer reported the glaringly obvious truth: that President Trump gave a good speech in Saudi Arabia today. Guest host John Berman had to push back: “you know, Bob, though, that there will be people who look at that last comment you made and say you’re normalizing the president.”

Schieffer gave the perfect response: he wasn’t trying to normalize Trump, he was trying to do what reporters [are supposed to] do: report.

Note: Berman resorts to the technique of putting his own thoughts into the mouths of others, when he tells Schieffer that “people” will say that he is normalizing Trump.

BOB SCHIEFFER: Today you saw a very different President Trump. He actually sounded presidential. You may agree or disagree with what he said, but he sounded like a president . . . This went over very well, mainly because he stayed on script. No tweets today. But a dignified speech.

I think very few people would disagree with me when I say he helped himself today, because he didn’t sound like the guy at the end of the bar popping off. He sounded like someone who had actually thought about what he was going to say before he said it.

JOHN BERMAN: You know, Bob, though, that there will be people who look at that last comment you made and say, you’re normalizing the president. You’re saying because he met this admittedly very low bar for not sounding foolish, in fact, he was in fact presidential. What would you say to criticism like that?

SCHIEFFER: Well, I’m not trying to normalize him in any way. I’m trying to do what reporters do, and that, report and try to emphasize what I think was important here.

They are not reporters, they are propagandists.

They don’t seem to see themselves as viewers see them. Each of these comments are aimed at hyper partisans. And that’s now where the votes are to take back power.

THE ROCK is warming up in the wings…. oh my. Dems better some up with something better than Ellison, the Dominican and Rock… or they will be in the wilderness for many winters.

Stopped watching CNN 20 years ago. They are a non-news source and akin to Entertainment Tonight. If only we could get CNN out of the US airports!

Bob Schieffer is one of the true “journalist” left in the media today, which is probably why you don’t see him that much anymore, because he isn’t a propagandist.

Heh, I laughed out loud at this. Nice.

notamemberofanyorganizedpolicital in reply to PrincetonAl. | May 22, 2017 at 6:00 pm

While saying Trump ” Sounded like a President ” is still an insult, it wasn’t delivered with enough venom.

Next thing you know, they’re going to accuse people of humanizing him which isn’t acceptable to the left because they love to dehumanize their targets. When you dehumanize someone it becomes very easy to commit all manner of evil acts upon them. That’s the left’s MO and it’s responsible for millions of deaths.

notamemberofanyorganizedpolicital in reply to Sanddog. | May 22, 2017 at 6:01 pm

Trump isn’t “normal”–he didn’t bow to anyone, like our “normal” ex-president obongo did. And obongo did indeed set quite a low bar.

… but he is still capable of reporting, you know, the news.

But Schieffer’s not reporting fact, either. Consider:

This went over very well, mainly because he stayed on script

And Schieffer knows what was in the script because … how? An unnamed White House source told him? Sorry, I think they’ve milked that particular imaginary cow dry. He’s dishing out smears and baseless speculation, even if they’re not exactly the same old tired smears and speculation we hear from the other leftoids.

Here’s a fact—What a President says and does is, by definition, Presidential.

This is not a near-Nixonian statement about the legality of what the President says and does.

But what somebody else declares is “Presidential” is utterly inconsequential. Especially what a Democrat claims in Presidential; after the national embarrassment of the Billy Jeff era, Democrats are going to have to earn the right to declare what’s “Presidential”. And they haven’t started to do that yet.

From my observation, “presidential” merely means blandness to the point no one – and I mean NO ONE – anywhere, is offended.

“Babies are beautiful” is safely “presidential.”

Scheiffer did his best to make it sound like he was complete and utterly surprised that he was capable of being presidential and on-message and otherwise subtly deliver a biased view of this speech, e.g. if the speech was good, let’s cast aspersions by noting how surprised we all were that he gave a good one.

And that level of bias and criticism wasn’t enough for CNN. Which had to go all on trying to shred him.

The media have beclowned themselves. It is fun watching their destruction – or it would be, if I watched them.

I cut the cord on cable and get my news from bloggers and twitter. It works just fine for me, and I don’t underwrite this nonsense.

notamemberofanyorganizedpolicital in reply to PrincetonAl. | May 22, 2017 at 6:02 pm

Schieffer is a Democrat Party Donkey’s Back Side……….

Trump is nibbling at the edges of the Never Trump brigades. At some point, middle America is going to tire of the all hate all the time message… and just tune out.

A better strategy would be to proffer some new ideas, new, young talent, and give credit where credit is due to the President.

Not everyone is a drooling partisan… the snowflakes are just energetic losers with no future after school… so they burn things down. That won’t fly in Middle America.

The Academics will begin to lose their grip on the minds of our young, as the Dept of Education reins them in for 30 years of Mega Liberal indoctrination. that pendulum is overdue for the journey back to the center.

Democrats don’t see the error of their hyper hatred. AGAIN, not every one has a stake in taking down Trump. Many in the center want this or any administration to be successful. Comments like those of the host only remind viewers that they cannot believe the mainstream media anymore.

This dufus reporter is so dumb he tries to enforce the anti-Trump message right on the air. You would think he would have enough brains to not try and correct a senior reporter on the air.

Back in January after Trump delivered his this is not really a State of the Union Speech, even Chris Matthews said tonight Trump became president. That was a short lived burst of something resembling honest reporting. After that the MSM tried to revive the “dark” meme it had used after other Trump speeches, bit that didn’t stick this time.

That night Trump “became president”, the Democrat Media decided that they had to overthrow him – and haven’t stopped working towards that end ever since.

It was awfully nice of John Berman to publicly admit that the mission of the Clinton News Network is purely to commit a political hit job on behalf of their namesake boyfriend and girlfriend.

Grudging approval of this speech is “normalizing” a duly elected US President who is doing what the entire Arab and Muslim world hoped the last President would do?

This is the speech that was the subject of this obscuring conversation on TV. It was covered in a far more professional fashion in an earlier thread, here. The following is the raw data, provided for the convenience of those who have not yet seen it.

Why didn’t Schieffer just come right out and express his shock that PDT gave a good speech and didn’t go off message?

Will the MSM fault President Trump for not bowing and kissing the a__ of the Saudi Leader just as Obama did? Trump should have followed Obama’s lead! LOL