Abdullah Alrifahe and Majid Alrifahe were arrested after police car search revealed a loaded AK-47, bomb-making materials, and a drone. 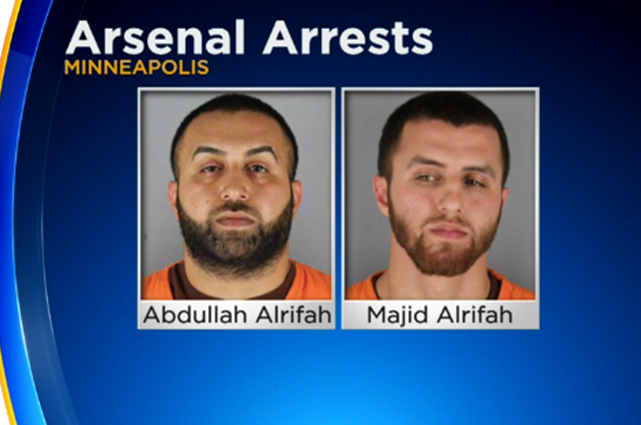 Manchester suicide bomber’s Salman Abedi’s father and brothers have been arrested in Great Britain, all of them suspected of having links to ISIS and Al Qaeda.

New details are emerging about recent arrests that indicate Minneapolis police may have averted another family-based terror plot in this country.

There are growing concerns about the arrest of two brothers with ties to the Middle East who authorities say had an arsenal with bomb-making materials, guns and ammunition in their car.

Twenty-seven-year-old Abdullah Alrifahe and 26-year-old Majid Alrifahe were arrested on May 11 in north Minneapolis.

Abdullah is being held in the Hennepin County Jail. His brother, Majid, has been released and is facing minor charges.

WCCO-TV has confirmed that both Homeland Security and the FBI are involved in the investigation, which started outside a federally-subsidized senior housing project. A good Samaritan confronted the men about littering from their car.

According to the WCCO report, police indicated that the contents of the brother’s car included a loaded AK-47, a handgun, a grenade, large amounts of ammunition, items later identified as bomb-making materials, and a drone.

The Minneapolis Police Department says the investigation remains an open. Meanwhile, Abdullah Alrifahe is being held on $200,000 bail, which is an extremely high amount for the charges he faces.

His brother, who is out of jail, did not immediately return phone calls.

Majid is facing misdemeanor charges, including disorderly conduct. The offense in Minnesota carries a maximum punishment of 90 days in jail or a $1000 fine.

The arrests were made as a result of an altercation related to the brothers’ littering.

According to police, a man walked by a parked car in north Minneapolis about 5 p.m. Thursday and confronted the people inside after they threw food wrappers on the ground. They ignored him until he paused to get the car license number. The men then got out of the car and indicated they had guns, according to a criminal complaint filed Monday.

The man flagged down officers, the complaint says, but the men from inside car continued to yell at him and resisted the officers’ attempts to control the situation. The men were insistent they needed to be near the car because a drone was coming to deliver a package, the complaint said. Because of the suspicious circumstances and fear for the man’s safety, the men were placed in the squad while officers searched their car.

It turns out one of the brothers may be a “known wolf“.

Abdullah N. Alrifahe, 27, of Minneapolis, was charged with a gross misdemeanor for carrying a pistol in public without a permit. In December, he was convicted of the same offense.

The elite media attention on this report has been…sparse. So, I turned to social media for further information and reactions.

Yes, obviously Abdullah and Majid Alrifahe were just on their way to an innocent family picnic. good grief. “Growing concern”

Barely anybody touching this story of Abdullah Alrifahe and his brother Majid, both convicted criminals who were… https://t.co/y42MK0xSUn

Most of the crowd bitching about Trump tonight likely want Abdullah N. Alrifahe released on his own recognizance bond by the MSP police. https://t.co/497Akk6kJh

It’s almost as if the public senses it can’t take the American press seriously anymore.

Let me be the first to toss some cold water on this until verified reports come in, particularly since the press will be more than happy to run around screaming.

1) “large amounts of ammunition” = “What?” Are we talking a loaded magazine? Enough ammo to depress the car’s shocks to the bottom? Remember, in DC you can be arrested and convicted for having a non-functional shotgun shell, so your results may vary.

2) ‘Arsenal’ Is a loaded weapon an arsenal in Minneapolis? In Texas, it’s a car accessory. Two just shows your commitment to diversity.

3) ‘AK-47’ I can just about flat out say the press is wrong. (Insert common picture showing everything the press thinks is an AK-47 here) A fully-automatic AK-47? Really?

4) ‘Bomb-making materials’ Are we talking Semtex, homemade PETN, or a can of black powder much like one might have for an antique pistol?

5) ‘…both convicted criminals…’ Felonies? If so, this is a fairly big deal. If not, and the guns are legally purchased, it’s hyperactive fluff.

Now, having said that, it *is* entirely possible these two are guilty of conspiracy to commit acts of violence inside the US. I just want to see some real proof.

I don’t care if these bozos had a slingshot.
I No Longer Give Muslims The benefit Of The Doubt.
Until Muslims show me that they are here to help
Americans,
not to be
1. Anti Semites,
2. Anti Christian,
3. Anti Gay
(fill in this list)
I want them out of here, no more Known or Lone Wolves.

Does anyone know who brought these Muslims to the Twin Cities?

Abdullah and Majid – nice Christian names, probably some Minnesota Lutherans of Scandinavian descent. Gotta watch out for those radical Lutherans I tell ya, especially the blond-haired, blue-eyed ones. They cause no end of trouble with their coffee klatches and church potlucks.

They also probably found a stash of obama and clinton bumper stickers.

I am not a trusting person any longer,
you can be with yourself – not with me or mine!