If only Bill had not stepped onto Loretta Lynch’s plane. 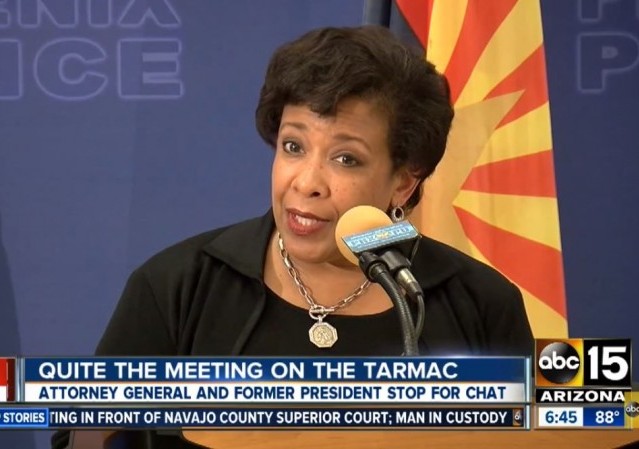 And he’s right that the demise of James Comey’s FBI career is Bill Clinton’s fault. If only Bill had not boarded the plane on the tarmac to chat with Loretta Lynch about “grandchildren,” Comey would not have been thrust to the lead on the investigation of Hillary’s server.

Maher said on HBO that much of the controversy raised by Comey during the last months of his tenure can be traced to Clinton visiting then-Attorney General Loretta Lynch in Phoenix.

“Comey had to say what he did [in July 2016 about Hillary Clinton’s email investigation] because the attorney general had to recuse herself because [Bill Clinton] walked on her plane,” Maher said.

“Bill once again [expletive]’ed-up his wife’s life,” he remarked.

Maher said that if President Clinton hadn’t boarded Lynch’s plane on the Sky Harbor Airport tarmac for several minutes without a third party, Lynch would have held the harshly-criticized press conference instead of Comey.

Here’s the video. As with most Bill Maher videos: Language Warning

bill Clinton… the “gift” that keeps giving… & those wonderful grandchildren.. thnk God someone (from the fbi?) reported their tarmac rendezvous….

There is a chance that someone in Air Traffic Control may have alerted the media. The controllers usually know if “very, very important people” are onboard private aircraft since it can affect how they do their job in a crisis situation.
Also Christopher Sign, the reporter who made the scoop, was able to confirm the meeting with another contact and Sign would have been more likely to know a local ATC guy than an agent in Lynch’s FBI security detail.

And, I have seen criticisms toward President Trump for asking Comey if he is under investigation.

Perhaps he is asking to avoid a perception of a conflict. If the answer was yes or I really can’t answer that – then end the conversation or get a bunch of witnesses around to be able to say that the conversation was about an unrelated business.