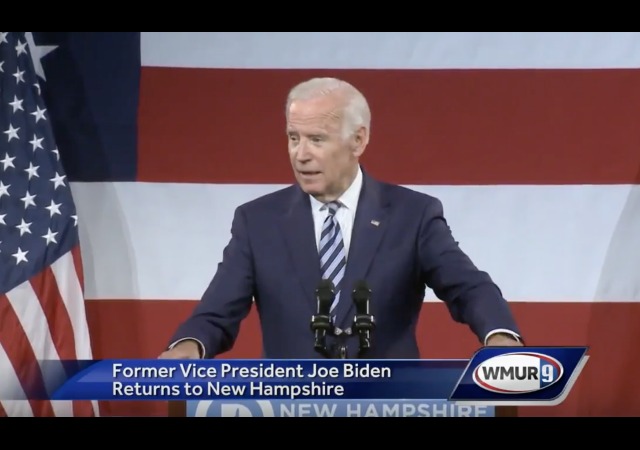 Let it go, Democrats! Former Vice President Joe Biden once again told his fellow Democrats at New Hampshire’s Democrat Party’s annual dinner that he will not run in 2020. From Fox News:

“When I got asked to speak, I knew it was going to cause speculation,” he said to big applause. “Guys, I’m not running.”

The crowd booed and at least one person shouted, “Run, Joe Run,” before Biden continued with his speech. He said that he was ready to start raising money and campaigning to help get Democrats elected at every level of government. He also touted some of his post-White House policy work including heading up the Biden Institute at the University of Delaware.

Biden told the crowd to abandon the false narrative that Democrats have to choose between progressive idealism and being a party that stands up for the working class. Instead, he said, there is nothing keeping the party from being both.

“What’s the core reason why you’re a Democrat?” he asked. “Because you abhor the abuse of power. Whether it’s financial power, psychological power, physical power.”

Biden also told those in attendance that they needed to remind “the 172,000 voters we needed” in the 2016 election that the Democratic Party has not forgotten them and understands them.

“A lot of them wonder whether we’ve forgotten them. They are being abused by the system. They are as decent as any one of us are,” he said. “So folks, let’s go win it back.”

The former Delaware senator caused a minor furor in December when he told reporters, “I’m going to run in 2020. So, uh, what the hell, man?”

yes, but the Muppet Show season 299 has been renewed…

Oh come on Plugz, go for it! Think of the precedent Bill Clinton set… you can grope EVERYBODY and there isn’t a damn thing anyone is going to do about it. Hell, you’re a Democrat… you can MURDER them and they’ll never do anything about it, except make you the Lion of the Senate, or something.