Texas Teacher Names Student ‘Most Likely to Become a Terrorist’

Texas Teacher Names Student ‘Most Likely to Become a Terrorist’ 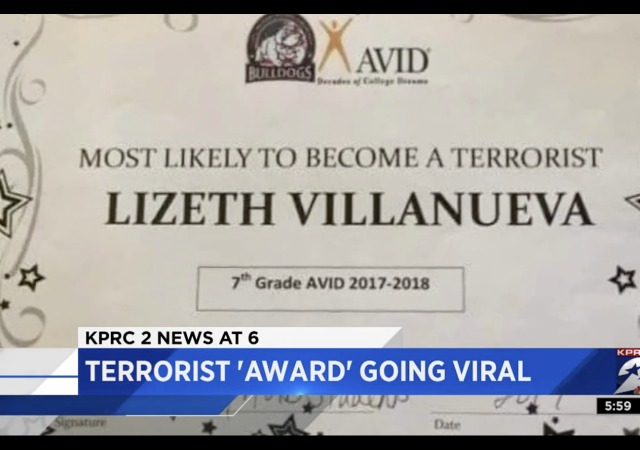 A teacher in Channelview, TX, received punishment after she named a student Most Likely to Become a Terrorist. From CBS Houston:

Channelview Independent School District official Mark Kramer said it was one of the “fake mock awards” a seventh-grade teacher distributed to students to her class. Kramer also described it as a “poor attempt to poke fun,” and an activity that “was not well thought-out.”

Lizeth Villanueva, the 13-year-old who received the award, said other students got awards too.

“Most likely to cry about every little thing, because [that student] is very emotional … There was another one about this kid. His was kind of like a joke because all his friends would call him, ‘Little homeless Indian.’ And [the teacher] told him, ‘Most Likely to Become Homeless in Guatemala.'”

Lizeth said other teachers were in the room when the awards happened. She said her teacher had prefaced her award with another “joke.”

“[The teacher] said she was scared to give out this award because she doesn’t know what might happen … The teachers [laughed], too. There were four.”

Villanueva’s family said school officials told them the teacher was suspended until the end of the year. Friday was the last day of class.

The teacher, Stacy Lockett, did not return our request for comment. Lockett’s school page is unavailable on the district’s website.

“No, it’s not funny, and they shouldn’t find it funny either,” said Iranesha Alexander whose younger sister is also a seventh grader at Aguirre Junior High. “If it was on the other foot, they wouldn’t be laughing.”

Other parents made online comments that people may be taking the award too seriously.

Erik Mendez said his son will attend the junior high next year. While he understands humor, he said this is not the time nor place for it.

“Joking around here and there, but with everything going on now, that’s not a way to approach … a jokingly way or any type of situation. A joke with that? No,” Mendez said.

The quality of teachers seems to have diminished since my school days back when dirt was newly invented.