World’s Oldest Person Passes Away at 117

World’s Oldest Person Passes Away at 117 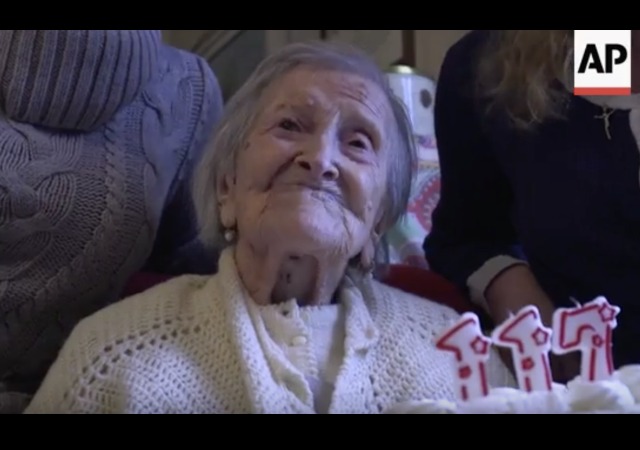 Emma Morano of Italy has passed away at the age of 117. She was the oldest living person in the world and the last person born in the 19th century. From the BBC:

Emma Morano was born on 29 November 1899 in the Piedmont region of Italy. She was officially the last person born in the 1800s still living.

She had attributed her longevity to her genetics and a diet of three eggs a day, two of them raw.

Ms Morano was the oldest of eight siblings, all of whom she has outlived. She died at her home in the northern city of Verbania.

Her life not only spanned three centuries but also survived an abusive marriage, the loss of her only son, two World Wars and more than 90 Italian governments.

Ms Morano had admitted that her longevity was partly down to genetics: her mother reached 91 and several sisters reached their centenary.

But it was also down to a rather unusual diet of three eggs – two raw – each day for more than 90 years.

It was a regime she took up as a young woman, after the doctor diagnosed her with anaemia shortly after World War One.

She had cut down to just two eggs a day, and a few biscuits recently.
Her doctor of 27 years, Carlo Bava, had told AFP news agency that she rarely ate vegetables or fruit.

“When I met her, she ate three eggs per day, two raw in the morning and then an omelette at noon, and chicken at dinner.”

Wow, imagine all the things she has seen happen in her lifetime.