The Mother of All Bombs destroyed an ISIS tunnel. 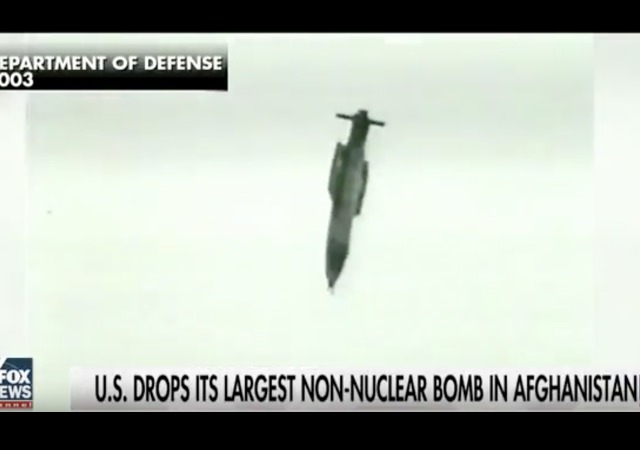 The U.S. military has dropped a Massive Ordinance Air Blast (MOAB) for the first time in history on an ISIS tunnel in Afghanistan. The military needs to use an Air Force C-130 cargo plane to drop the bomb. Fox News reported:

President Trump told media Thursday afternoon that “this was another successful mission” and he gave the military total authorization.

Trump was also asked whether dropping the bomb sends a warning to North Korea.

“North Korea is a problem, the problem will be taken care of,” said Trump.

A MOAB weighs 21,000lbs, which gave it the nickname Mother of All Bombs. From the Washington Free Beacon:

The bomb is designed to explode in midair and has a blast radius that can stretch out a mile. It is designed in a way that allows the concussion of the blast to penetrate tunnels with enough force to kill the people inside.

The bomb was dropped on an ISIS-Khorasan tunnel complex located in Nagarhar Province.

General John Nicholson, who commands US forces in Afghanistan, described the MOAB as the right bomb for the job.

“As ISIS-K’s losses have mounted, they are using IEDs, bunkers, and tunnels to thicken their defense,” Gen. Nicholson said in a statement. “This is the right munition to reduce these obstacles and maintain the momentum of our offensive against ISIS-K.”

But Bob Owens on Twitter reminds us that we have a much larger bomb:

The Department of Defense developed the bomb in 2003 before the U.S. invaded Iraq:

It was intended to be used in the “Shock and Awe” phase of the invasion of Saddam Hussein’s Iraq. Then-Secretary of Defense Donald H. Rumsfeld said the MOAB was meant to send a message to the Iraqi military.

“The goal is to have the capabilities of the coalition so clear and so obvious that there is an enormous disincentive for the Iraqi military to fight against the coalition,” Rumsfeld said after a test of the MOAB on March 11, 2003.

The speed of the invasion and lack of substantial resistance prevented the MOAB from seeing battle during Operation Iraqi Freedom.

Does it surprise you that the media has freaked out over the bombing? Yeah, me either. Weirdly enough, they remained relatively silent when former President Barack Obama dropped over 26,000 bombs in 2016. But I digress.

The article said the goal was destroying bunkers and tunnels. Can anyone tell me what isn't "immediately clear" to the LA Times? https://t.co/x9ti8NXR5h

The #MOAB explosion is equivalent to 11 tons of TNT and the blast radius is a mile wide. How many innocent children were in that mile?

ISIS is smiling. Trump dumps MOAB on Afghanistan. Great for their propaganda and recruitment. Keep drawing US in more and more.

Trump is the MOAB of politicians: he indiscriminately destroys an entire location with unthinking brutality, in this case the United States. pic.twitter.com/blMu5nf0Wq

Mother of All Bombs?

But is MOAB really the Mother of All Bombs? Nope:

So the blast above the bunker is enough to kill the occupants from the concussion. Ingenious.

The comment by Bob Owens isn’t really correct. The Massive Ordnance Penetrator (MOP) is indeed a heavier bomb than the Massive Ordnance Air Burst (MOAB). But they are constructed very differently. The MOP only has about 5,300 lbs of explosive in it, which is just a fraction of its total weight, whereas the MOAB has 18,700 lbs of explosive, which is the majority of its weight. So the MOP has less boom than the MOAB.

The reason for this difference is that the MOP needs a massive amount of what’s basically armor to protect the bomb while it penetrates into ground, rock, or concrete. It only explodes after it has penetrated deep underground. Without all that armor, the bomb would break on the surface.

If they used the MOAB on a tunnel complex, then the tunnels weren’t that deep underground. The MOAB probably covered a larger area than the MOP would. But if we ever go after Iran’s buried nuclear facilities, we’ll probably need the MOP, not the MOAB.

In tunnel clear the MOAB, or any other air-burst ordinance, creates a wave of concussive overpressure which moves down the tunnels, causing injury and death. Now, maybe this worked well and maybe it didn’t. We won’t know until we go in and search the tunnels that are not collapsed.

But, this was not about eliminating an effective opposing force. ISIS only has approximately 1500 fighters in Afghanistan and they are restricted to two small provincial areas right on the Pakistan border. The bulk of the opposition forces in Afghanistan are Taliban and Al Queda groups. And, these groups are now embedding themselves within local civilian populations, which make the use of ordinance, such as the MOAB, both tactically and strategically impossible. This operation was simply a public relations gimmick to show off the size of US munitions.

“ISIS only has approximately 1500 fighters in Afghanistan…”

I imagine the dead jihadi’s disagree with your public relations BS.

According to media reports, ISIS has a whopping 11 less fighters today than they had before the bomb was dropped. There might be more casualties but, we’ll have to enter the tunnel system to get that intelligence.

Make no mistake, dropping the MOAB was all for show. Claiming a strike on ISIS is simply an excuse.

As I wrote in the other thread, the over-pressure wave is the key to why this type of weapon was used. It has been reported that the US military had information indicating that this tunnel complex was filled with IED’s, making it impossible for special forces to enter without sustaining high casualties. A massive overpressure wave moving down the tunnels would have the nice effect of causing every IED inside to self-detonate. Any casualties underground would just be a nice side effect, but if the military is correct about the place being loaded up with IED’s, then it would have been a hot time down in those tunnels for anyone dumb enough to get caught in them.

Nobody want to fight in the tunnel system of another. And, there is no real need to do so. Tunnels can be seal up. Much smaller thermobaric munitions have been used in the past and do a reliable job of accomplishing this mission. Also, if the tunnel system is booby trapped with IEDs, then entry to determine the casualties and extent of the damage is just as dangerous now, if the traps were not destroyed by the blast.

The use of the MOAB was largely for show, as it can not be used against the Taliban or Al Qaeda who tend to embed themselves within the civilian population. While there is nothing wrong with using the MOAB, let’s be honest about its true purpose in this instance. Show.

Food for thought. The MOAB is designed to be carried by a cargo aircraft, so using it over an active ADA system is a no-no.

The larger 14 ton MOP is designed to be carried on the B2 bomber, 2 at a time. We have close to twenty of them. They *can* be used inside an ADA system, particularly one in the first few hours of a combat where radars will be blowing up as fast as they are turned on.

Wait for it … it could be MSNBC or CNN … someone will posit the reason the MOAB wasn’t used in the last 8 years was because the military kept it secret from Pres. Obama.

snakes and sparklers are the only ones Obama likes.

After examining this matter closely, I must sing ” America F… Yeah!!!” Thank you Team America! (Sarcasm) I seriously doubt that there will be more American death’s in Afghanistan after this, Trump is willing to make example’s that our enemies will have to acknowledge. They can ignore these examples at their peril.

Survivors can be identified by their use of the word…huh.

Final field test before use on Nork tunnels under Pyangyang?