Tucker Tangles With Guest Who Insists Breastfeeding is Not Natural

Tucker Tangles With Guest Who Insists Breastfeeding is Not Natural

Guest claims not to know whether or not men can breastfeed 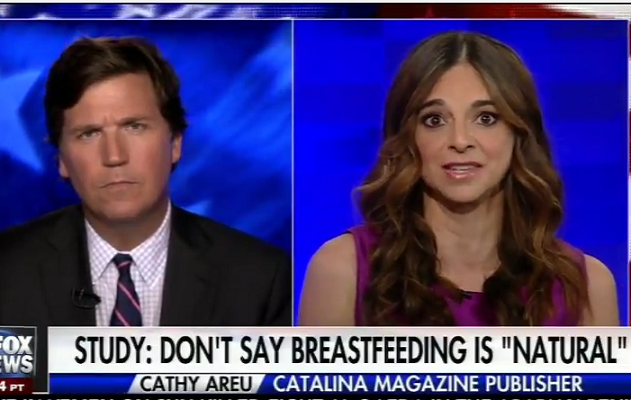 Last night, Tucker Carlson did a segment on a 2016 study published in Pediatrics, and it was a doozy.  The study reportedly claims, in part, that calling breastfeeding “natural” reinforces traditional gender roles.

It’s “ethically inappropriate” for government and medical organizations to describe breastfeeding as “natural” because the term enforces rigid notions about gender roles, claims a new study in Pediatrics.

“Coupling nature with motherhood… can inadvertently support biologically deterministic arguments about the roles of men and women in the family (for example, that women should be the primary caretaker,” the study says.

. . . . “Referencing the ‘natural’ in breastfeeding promotion… may inadvertently endorse a set of values about family life and gender roles, which would be ethically inappropriate,” the study says.

Tucker, of course, had a field day with this one, using the above quotes to set up the segment.  His guest, Cathy Areu, is an early nominee for Tucker’s most clueless guest of the year.

This is beyond ridiculous now.

Breastfeeding IS the ONLY natural way to feed a baby. That’s how NATURE intended it to be. Formula is not “natural”.
I am sick and tired of these imbeciles advancing the idea that women should care about the look of their boobs, and not about the health and well being of their children.

A very consistent trend that has been increasing of late has been the Left’s modification of the scientific process. Historically and rationally, the scientific process has been a practice where experiments are done and then the collective results are evaluated and put into context. This means that it is not uncommon to have some studies say one thing and some that say the opposite leading to more experiments to determine the reality if what is occurring. Eventually, this leas to a trend where opposing results are viewed as outliers where the experimental design was flawed, the experiments were poorly performed, or whatever.
>
Today, however, the Left has come upon a new paradigm and anyone who disagree with it is antiscience. This new paradigm is one where is does not matter how many studies show the result of “A” nor does it matter how the results of “A” have been widely accepted, what matters now is that when the Left finds one study that denies “A” and comes up with “B” as the result where “B” is the result that fits their social or political ideology, then “B” is unquestionably correct and “A” is bad and unsubstantiated.
>
It does not matter if the subject is vaccines, breastfeeding, global warming, or any of a host of other issues, to the Left, the sole result that supports their ideology is the only acceptable solution, no matter how absurd. This mindset has brought the specter of Lysenkoism to many areas in science. What is just as bad is how using the scientific method to come to a differing conclusion that what they want labels you as antiscience regardless of the amount of evidence you cite in support nor the paucity of evidence they can conjure up.
>
In this situation, the lady from La La Land cites the anecdotal story of one woman who had trouble breastfeeding as an absolute fact even though she had no documentation. She also took that one situation and then inappropriately expanded it to be applicable to all woman as though there was no other outcome. Lastly, she fails to understand history and how when women had difficulty nursing, they often turned to wet nurses to solve the problem. Wet nurses would then use their own breast milk to feed other women’s babies.

I feel sorry for her infant children, if she has any. They will presumably only know nutrition from a can.

Well, the woman is a loon, no doubt. But do not pity her child on account of formula — my daughter and millions of others adopted as infants by loving mothers who could not breastfeed grew up healthy and are just fine, thanks — but because . . . the poor kid is going to have a loon for a mother!

Ahhh, the politics of “Enlightened Science” where a group of delusional people insist that gender is a state of mind, truth is anything but absolute and ten thousand years of natural science is irrelevant.

And we all thought Pol Pot was evil. smh

In the past, people who could not procreate did not reproduce; in the past, women who could not lactate looked for a wet nurse. The European female nobility in earlier times tended to rely on wet nurses because this would allow them to produce more heirs in the hope that their line would continue since lactating women are less likely to get pregnant and childhood mortality was so much higher.

The fact that we have more choices today does not mean that they become the new norm or define what is natural.

Sorry to come in late.

Of course breastfeeding is not natural.
To paraphrase Bears new QB Mitch Trubisky “titties are for kissing”.

The really alarming thing about this is that such a stupid article was published in a journal named Pediatrics.

The point she’s trying to make is not wrong, and Carlson explicitly agrees with it; but it’s just not what this “study” is saying, and she makes a fool of herself trying to shoehorn her fairly reasonable point into the language of a piece that’s making a very different and very unreasonable point.

No, women don’t have to breastfeed, and thank God and modern technology for that. Women who can’t or prefer not to breastfeed shouldn’t feel guilty, and it’s certainly true that the naturalness of breastfeeding should not be used as a stick to beat them with. But this doesn’t change the fact that breastfeeding is natural and formula is not. Nature does dictate sex roles; technology frees us from them.

And no, she does not “claim not to know whether or not men can breastfeed”. This post’s subhed is just lying, and should be changed; shame on whoever wrote it. She’s very well aware that men can’t breastfeed, but says this doesn’t prevent them from feeding children by other means, which is of course true.

The really sad part, though, comes right at the end, where she shows her ignorance of the fact that formula is a very recent invention, and of how children were fed before it was available. She doesn’t understand that throughout human history if a mother could not feed her baby either a wetnurse was found immediately or the child starved; there were no other options. We should be thankful that today we do have some, even if they’re not ideal.

“either a wetnurse was found immediately or the child starved; there were no other options.”

Actually not true, for hundreds of years animal milk was substituted for mother’s milk. Goats milk was especially successful and has been used since biblical times.

Also, “formula” isn’t exactly the best thing since sliced bread that it is made out to be, in my personal and medical opinion. My advice as a 20+ year nurse is Mother first, natural milk second, formula last.

Tucker: It’s suggesting, by the way, that men can breastfeed, which I don’t think they can.

Tucker: Well, I do know. The answer is they can’t. I have four children, I can tell you.

Areu: (still talking over, interrupts herself to respond:) I don’t know. I don’t know your secrets.

Granted, she is giggling and has distracted herself with her own babble, but she clearly was unwilling to state that men cannot breastfeed. In short, she claims she does not know. Twice.

The “I don’t know” is clearly a transgender joke, which continues with “I don’t know your secrets”. But she gets immediately back to her completely correct and uncontroversial point that men can feed babies, which she ludicrously insists is the point of the Pediatrics article. The truth is that she doesn’t really care what that article says, and may not even have read it, she’s only interested in presenting her view, a view with which Carlson actually agrees, but it’s nothing like what the article is pushing.

If the whackos can insist on free tampon dispensers in mens’ rooms on college campuses (see Brown U), then what’s to keep them from believing that men can breastfeed?

I feel Tucker could have done a better job shutting down that idiot. She was essentially claiming that breastfeeding was preventing the fathers from feeding their kids. Well, T should have jumped down her throat on that. Medically, it’s been proven that breastfeeding is the best alternative for the child, but not necessary. The idiot was trying to posit that women who weren’t breastfeeding were the objects of scorn. Yes, probably from some leftist femiNazis, but not as a general rule. It’s a personal/situational issue. It’s women like the idiot who trumpet the “gender” stereotyping and attempting to skew science and the biology of mankind. She’s right up there with the transperves.

It’s really very simple.
If:
a. Women are equal to men, and
b. Men do not breastfeed [or give birth],
Then:
c. In order to advance perfect equality, we must “scientifically” prove that breastfeeding is “not natural” [enshrine abortion in the legal code].

In other words, we must pervert science and law to overturn “the patriarchy”.