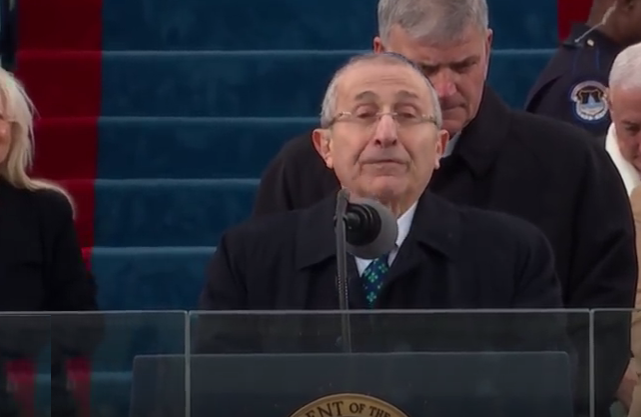 Rabbi Marvin Hier, founder of the Simon Wiesenthal Center, will become the first non-citizen to light a torch during Israel’s main Independence Day ceremony this year.

Hier, who in January delivered a prayer during the inauguration of President Donald Trump in Washington, DC, is one of three individuals selected for the honor by the Ministry of Culture and Sport, the Calcalist financial supplement of the Yediot Acharonot daily reported Friday.

Culture Minister Miri Regev decided last year to include non-Israeli Jews in the Independence Day torch lighting, saying their participation would symbolize the stake that Jewish people all over the world have in the Jewish state.

This year’s theme for the ceremony is “Jerusalem: the Eternal Capital of the State of Israel and the Jewish People.”

During his 2-minute prayer at the inauguration, Hier recited the Psalm 137 passage reading “If I forget thee, O Jerusalem, may my right hand forget its skill. The doer of all these shall never falter.”

Here is his Inauguration Day prayer:

During the period when drama-filled calls for Inauguration boycotts were all the rage, there were demands that Hier not give that prayer.  Hier explained why he accepted:

Hier said he received the invitation to attend Trump’s inauguration in late December, and that saying yes to it “was a no-brainer – took me about two seconds.” He explains, “It’s a great honor, but even before that, it’s my duty to attend the event. I was taught by my father that ‘Dereh eretz kadma l’Torah’ [roughly, ‘graciousness is paramount’] – and it would have been rude and unkind to turn down this invitation.

“It’s especially true here in America, a country where Jews have flourished more than in any other Diaspora in the world. Imagine the reaction of the American public if it became known that a presidential committee sent this kind of invitation, and the rabbi refused. That would create ill will. So for me, it wasn’t even a question. And yes, I pray that he will be a great president.”

It seems Hier was bombarded with anti-Semitic messages after delivering the invocation. However, there is no way of knowing how many were actually hoax-hate messages.

Two intriguing Israelis will be sharing the honors with Hier:

Yehoram Gaon (77), one of the most revered singers and performers in Israel, has been chosen as one of the iconic symbols of the city of Jerusalem. Gaon was born in Jerusalem and has participated in numerous compositions which defined the country’s cultural moments, including the movie “Kazablan”, “Operation Jonathan” and the autobiographic movie “I am a Jerusalamite”. He has also appeared in numerous television series.

Amnon Shashua (57) is a professor of computers in the Hebrew University, Jerusalem,co- founder of Mobileye and c-founder of Oracam technologies. He and his partner Ziv Aviram recently sold their Mobileye company for 15 billion dollars in the largest hi-tech deal ever in Israel.