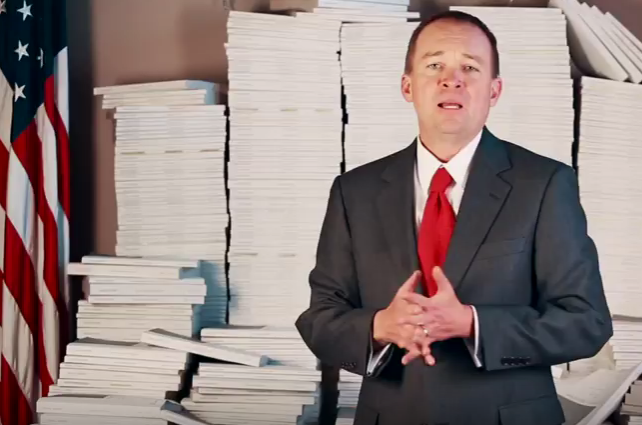 Shortly after his inauguration, President Donald Trump signed a series of executive orders, including one that led to a complete halt in the hiring of federal workers with few exceptions.

There has been a slight melting in that freeze, as a more tailored approach is implemented.

Mick Mulvaney, the director of the Office of Management and Budget, described the new stay on hiring as a more “surgical” freeze than the first.

Mulvaney told reporters Tuesday that the new administration guidance — which he called the Smart Hiring Plan — will go into effect at federal agencies Wednesday and will result in some agencies having the flexibility to hire while others may need to trim further, depending on where the particular agency falls in Trump’s budget priorities.

Some agencies, such as the Department of Defense and Veterans Affairs, will have broader hiring options. However, others will still be left out in the cold.

The documents released through a Freedom of Information Act request by the Sierra Club and reviewed by CNN also show the hiring freeze affected an additional 140 people internally chosen for jobs or, in some cases, offered jobs but could not be finalized before the freeze went into place.

“That’s about one-third of the total number of positions hiring was frozen for, so we are seeing high skilled people being held up from working at the agency,” Coequyt said.

The White House now has a new website, Reorganizing the Executive Branch, giving Americans a chance to chime in about how to restructure the government.

Source documents for your reading enjoyment….

1. The Executive Memo of 1/23/2017 which gave OMB 90 days to come up with a plan to reduce the government labor force at which time, the EM expired.

2. The Executive Order of 3/13/2017 which told OMB to develop the plan to reorganize the Executive Branch. It also gave the heads of the agencies 180 days to come up with their plan of action.

4. Finally, the OMB pdf. It is 14 pages long. The chart on page 6-7 is interesting and the words eliminate, merge, restructure appear often.

I did see (somewhere?) a reference to the hiring freeze EM where the storyline was that Trump’s hiring freeze was a failure and he had to rescind it.

Of course, they forgot to mention that there was a sunset provision in the EM once the OMB produced an action plan.

Liz, I always assume the Exact Opposite of whatever the Liestream Media is screeching on about……..

When Executive Actions (EM or EO) were being signed, I started looking at the WH website for the text to compare to the media reports. Now, it is a daily check. And, I prefer reading the press conference transcripts vs having to listen to them.

It is amazing how much is misreported. A lot of the early EAs were the “stop the process for x days, develop a plan of action, report to me and then we’ll decide”. That is a typical plan of a new manager in office.

For some of the rules reversals that we are hearing about, it is actually Congress voting on reversing the regulation and Trump signing the law. And the law that allowed this to happen was part of the Contract with America and signed by Clinton. Two points – if a rule/reg is reversed in this fashion, it cannot be reissued unless Congress lets it be reissued. And, there is a time frame based on legislative days, so apparently Congress can use the CRA for regs passed from May 2016. Sorry – it is Wiki link…

Congress under Bush gave him only one law to sign. So, far Trump has signed many more. WaPo declares that it is an “obscure law” even though the impact is only important when there is a change in the political party of the president.

FYI – in addition to the regular WH website, there is a daily summary here… it does include the video of the press conferences, just in case you want to check out the video vs the summaries of the video.

Amazing how many people cannot recognize a parody account when
it clearly states that it is and a lot of other people tell them. It pays to do some research before posting anything!

Really??? A down vote on providing source materials to read? How more neutral can a person get?

The only person who could complain would be Leslie, just because I gave primary sources and not secondary sources. But, she shouldn’t complain since I was backing her up. Gees….

As long as there is a net reduction, and a significant one at that, I have no problem with additions where the federal government SHOULD be focused – our security and proper treatment of our veterans.

Balancing that with even greater reductions in some of the most wasteful and least needed areas like the Department of Education, etc., is what I expect to see. And I suspect if it doesn’t happen, it will lead to more disenchantment by those who voted Trump into office.

I agree that each department should review activities to eliminate, merge or improve their department. Here is the DEd budget fact sheet from last year… Oh… put on your waders for the this document… it’s deep…

What I think we need is someone with the website knowledge to get something going to get people to look at each department (chose your area of interest or expertise) and then submit suggestions for comments into the WH website. I would not be surprised if the left has already thought of this, so can we have a conservative attempt to influence? I’ll be looking for areas where I can make good, logical suggestions but there is a bunch of areas where I can only say “WTF?”. I would appreciate some logical reasons why I should be saying..” WTF, but, this is what you should be looking at…”

The research on some of these things is staggering, but the crowd sourcing concept could work. BTW, look at the WH link to the OMB site, the dropdown list is staggering – they could have made it a bit easier to navigate.

The new Captain’s first orders include commands to Damage Control to plug up the holes in the hull before the ship sinks. Then after that’s done and she’s no longer taking in seawater, Ship’s Carpenter can examine each of the patched holes and do a neater and more structurally sound job on each, and even open some of them back up since Damage Control got a little carried away and plugged up the intake vents for the engine coolant.

Meanwhile, I’d like to see the government consider declaring the Sierra Club a terrorist organization. Not necessarily do it, just give some consideration to the merits.

Since I seem to be on a roll in commenting, I’ll admit that your example made me laugh.

Your example is spot on. But, I race small sailboats. Required items in the ditty-bag are red protest flag, book of racing rules and duct tape, the item to quickly fix anything, including holes in the hull.

After a collision, the protest flag goes up first, followed by a brief discussion of who broke what rules, than the mad scramble for the duct tape, bucket and whatever is needed, then the decision to retire or continue on. Someone is assigned to write up the protest form within the allocated time. At some point in time, grog is distributed to all crew. Sometimes, lots of grog.

After the protest meeting, the ship’s carpenter (local fiberglass repair shop) gets to estimate the damages to submit to the insurance companies. More grog is allocated to ship’s owner, depending on the results of the protest committee. Or, do I pay for damages to both boats or does the repair get paid for by that other #&^@%$ sailor? Typical sailor talk has been modified for purposes of this discussion.

We are past throwing up the protest flag and we are reading the rules and deciding how to protest. We can hope that the protest committee finds in our favor.

The Sierra Club is worried about “scientists” not having government jobs. Real scientists ought to be able to find real work outside of government. People with PhD’s in fake science are going to have a tough time because McDonald’s is eliminating jobs.

As they say, “Any field with ‘science’ in its name isn’t”.

“That’s about one-third of the total number of positions hiring was frozen for, so we are seeing high skilled people being held up from working at the agency,” Coequyt said.

And I have to wonder how many of these ‘high skilled people’ were Obama political appointees ‘burrowing’ into Civil Service positions or plants approved by Obama appointees.

I suspect the answer is ‘all’