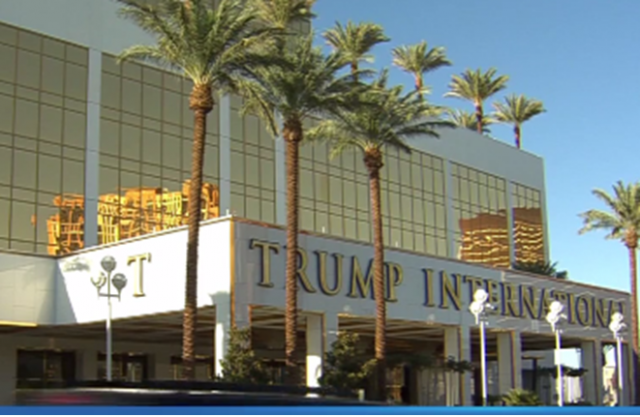 A couple of days ago, a fire was set in the women’s restroom on the pool deck of the Trump International Hotel in Las Vegas and an second fire was dealt with in the hallway of its 17th floor.

The hotel’s toasters were used to set the blaze.

Upon investigating, officials discovered four toasters—two on each floor— that were allegedly placed there to ignite fires.

The 17th-floor fire consumed the two toasters and towels, while the one on the pool deck ignited the toasters and other, smaller materials, KTNV reports.

Officers with the Las Vegas Metropolitan Police Department quickly arrested Roger Fraley in connection with the fires. Further investigation revels an intriguing motive for the arson:

Fraley fought with security personnel, and caused minor injuries to one. It seems questioning Fraley about the incident was a challenge:

…In an initial interview between LVMPD officers and Fraley, he stated that Roger Fraley was not his name and he had the given name of Rick Anthony Oliveras. The suspect then continued to tell police that he was dropped off by a friend after leaving his vehicle — a Pontiac Firebird — and upon entering the lobby, he was tackled by 10 people and beat up.

Later on, Fraley then told officers that what he told agents and detectives previously was untrue and that he did not have a car and his name was Roger Fraley.

He then told police he had been up all night and day wandering around and had not slept at all.

Fraley told officers he felt “f***ed up” from being awake and felt burnt from being in the sun. He then stated that he walked into the hotel and started to walk around to see what type of “dumb-f***ery” he could get into.

His odd behavior with the toasters triggered an observant employee’s initial concerns.

…He admitted that he saw the toasters sitting on a shelf in a closet and said an idea came to him. Although he admitted to taking the toasters from the closet, he would not go into detail about what he did with them.

Fraley was first observed by a hotel employee in an employee only area. According to the report, the employee saw the suspect with 2 toasters in his arms and attempted to make contact with him. However, he walked away. The employee then walked out into the area where the pool deck bathrooms are located, observed smoke, and alerted the hotel’s security.

At first blush, it does not appear that the motivation for the arson was based in anything other than “dumb-f***ery”. Perhaps North Korea’s Kim Jong Un has the same motivation?

Hey Roger, since you are so f*** up, why don’t you to take Nevada up on their offer to be a guest of the State of Nevada for a few years?

He then stated that he walked into the hotel and started to walk around to see what type of “dumb-f***ery” he could get into.

F***ed around and found out, didn’t you?