Sugar-sweetened drinks were not associated with stroke or dementia 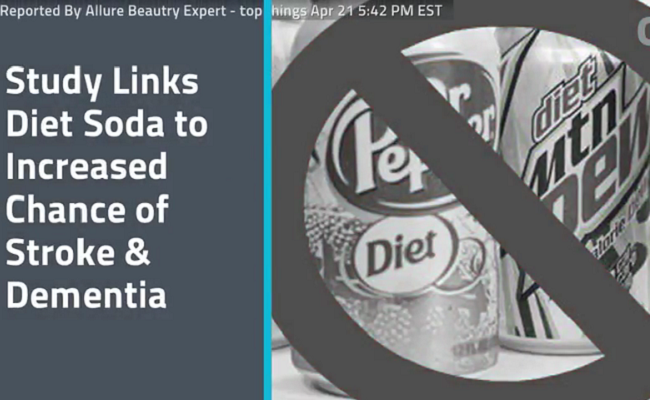 Diet drinks and possible association with stroke and dementia https://t.co/YA93Ndxmaa

From the study’s abstract:

Researchers caution that sugar-sweetened beverages are still not the best choice and recommend drinking water instead.

A study published in the American Heart Association journal Stroke found a daily diet soda puts a person at three times the risk of dementia and stroke compared to someone who drinks less than one a week.

It’s another blow to diet soda, which has been the subject of recent unflattering studies. Purdue University found in 2013 it doesn’t actually help us lose weight. Another 2007 study discovered those who drink diet soda are no less at risk of heart disease than those who drink regular soda.

In fact, the Stroke study found drinking sugary drinks such as soda and fruit juice, doesn’t increase a person’s risk of stroke and dementia. Researchers caution that’s not a call to go buy sugary drinks, which Harvard has linked to type 2 diabetes and heart disease.

“Although we did not find an association between stroke or dementia and the consumption of sugary drinks, this certainly does not mean they are a healthy option,” explained Dr. Matthew Pase, study author and a senior fellow at the Boston University School of Medicine. “We recommend that people drink water on a regular basis instead of sugary or artificially sweetened beverages.”

This “study” seems to be nothing but junk “science”. Please keep in mind that correlation does NOT imply causation.

I tuned those people out years ago when they said eating tuna salad would kill me. I guess they were wrong, but I have been too. In the 60’s I thought I wanted to be killed by a jealous husband on my ninetieth birthday. That was wrong, make it a couple of days later so I can be sure to get a piece of my birthday cake.

The guys who invented polio vaccine were researchers. I’m not sure what to call the people who come out with this crap, but they don’t fit into the same category.

Coffee,eggs,meat and the list goes on and on. Is this another gov sponsored study? If so, we need to stop all studies.

More of the left’s attack on sugar (see soda and candy taxes) it appears, though I’m not quite sure why they’re so enamored to the idea. What are diabetics supposed to drink?

This sounds lie a case where someone found a statistically insignificant and vanishingly small number of events and then, using a rather small population, determined that drinking soda pop will result in a rather dramatic increase such that it remains extremely rare. When the error bars are 100 times greater than that you are measuring, then you really have nothing of any statistical significance.