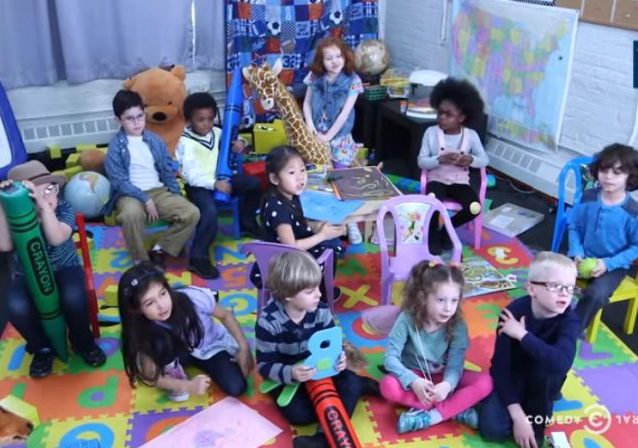 The Daily Show with Trevor Noah, like the rest of the entertainment industry, is no friend of the Trump administration or Press Secretary Sean Spicer.

But sometimes the entertainment industry, in its desire to mock Trump, ends up mocking itself or other Trump haters.

We saw that with the Saturday Night Live skit about a Trump-loving dog.

And Noah did the same thing portraying Spicer as a kindergarten teacher dealing with unruly press children.

It was a take-off on Kindergarten Cop:

After a minute of Trump and Spicer bashing, the video cuts to the key scene:

Clearly, Noah means to mock Spicer. But he did a better job mocking the press.

Because they live in a liberal bubble, the press and Noah don’t understand that the public views the press as unruly kindergarteners. So the joke was on them.

That was soooo spot on.

Thanks for the thread, Professor.

That was the most of the Daily Show I have ever watched, so I sure would have missed it otherwise.

“At the core of liberalism is the spoiled child — miserable, as all spoiled children are, unsatisfied, demanding, ill-disciplined, despotic and useless. Liberalism is a philosophy of sniveling brats.”….PJ O’Rourke

Spicer is the alpha male in that room, while never being even 0.1% offensive. The press used to be much more aggressive, remember the first few weeks. But now they really are reduced to behaving like small children, and everyone accepts it.

There’s some serious stuff going on around the world with big league things happening, and a reporter asks Spicer if Trump is going to reimburse the federal government for the cost of security when he goes to his home in Florida…Yeah once Obama reimburses for his annual two week trips to Hawaii and Martha’s Vineyard.

I have lived without television for nearly 20 years and once I was detoxed,I realized the fool MSM believed I, as a viewer, was. They are nothing more than an enemy of the state, placing priorities in the liberal Democrat party agenda over the free citizens of the United States. Thank God that a revolution of citizens were able to take advantage of newer medium technologies that truly inform the citizenry and remove the propagandizers from their lofty perches. Thank you, Professor!