Russia Unveils Massive New Military Base in the Arctic

Russia Unveils Massive New Military Base in the Arctic 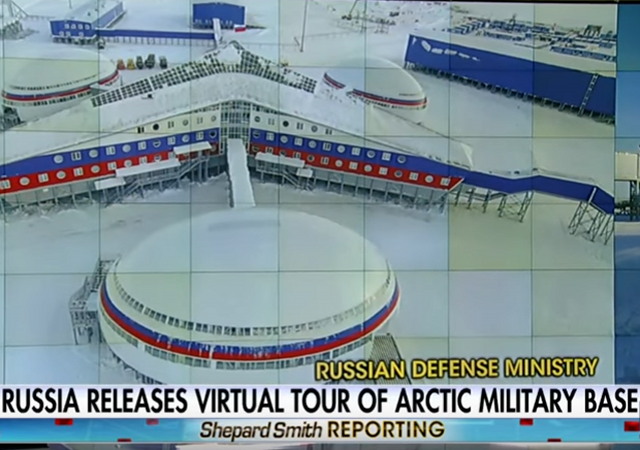 Democrats have been running around for months crafting an anti-Trump narrative about the threat Russia presents to our democracy. Now, there is real reason to be concerned about Russia’s actions.

Russia has built an expansive new military base in the Arctic.

Russia unveils its newest Arctic base

Russia has unveiled a new military base as part of its buildup in the Arctic region, and has provided a tour — albeit a virtual one on your computer.

According to a report from FoxNews.com, the base is located on Franz Josef Land — an archipelago north of Novaya Zemlya that the Soviet Union seized from Norway in 1926 — and is known as the “Arctic Trefoil” due to its tricorne shape.

The base covers roughly 14,000 square miles and can house up to 150 people for a year and a half. The National Interest has reported that Russia has developed new versions of several systems for a cold weather fight, including the SA-15 Gauntlet, the T-72 main battle tank, and an artillery system known as Pantsir-SA. A version of the SA-10 modified for Arctic conditions is also being developed.

The Arctic Trefoil is the second base Russia has opened in the Arctic. The first one, called Northern Clover, is located on Kotelny Island, north of Siberia. According to a 2014 report by the Russian news agency TASS, its runway is capable of landing Il-76 Candid cargo planes, which are comparable to the retired C-141 Starlifter, year-round.

If you watch this FOX News report to the end, you’ll hear that the goal is for Russia to exploit oil and gas reserves in the region:

This news is not being taken lightly. CBS News reports:

Russian President Vladimir Putin has never been one to pass up a photo-up, and his latest candids comes from the icy Arctic. He was photographed in March pensively walking among glaciers, reports CBS News’ Jonathan Vigliotti.

The Kremlin has also previously released video of reindeer-riding Russian soldiers. It’s all part of the unveiling of the country’s crown jewel: Russia’s sprawling Trefoil military base, located just outside the Arctic Circle. It can house 150 troops and warplanes…

Russia, the United States, Canada, Denmark and Norway have all been trying to assert jurisdiction over parts of the Arctic. Legally it’s still unclear who can lay stake to the territory, but the Kremlin knows how persuasive a good show of force can be.

“We all stand to make money in the Arctic, but of course this will all grind to a halt if we see a new arms race instead,” former Defense Department policy analyst Robert English said.

Umm, so,what exactly is the problem?

Russia builds,a base on its own territory, at considerable expense, while we build bases all over the world. Including on Russia’s doorstep–but they’re the looming threat?

Russian land (arguably) since 1926. “Massive” only, perhaps, in terms of physical size. At 150 people, that’s hardly a threat. Probably not much different than the old DEW Line facilities from the Cold War.

Oil and gas reserves are certainly a good motivation to build a military outpost, but again, their land / ocean. Not a whole lot different than our North Slope in that regard.

So each guy gets 94 square miles to himself? Nonsensical claim, it’s just crayon marks on a map of a wasteland with 1 building in the middle of it. If it were in the shape of a square, it would be 120 miles on a side. Looked up Franz Joseph Islands on wiki, says they are 85% glaciated. Maybe they need this base to fight off the polar bears.

When I was a kid all are text books called it like it is, Arctic Wasteland.

The Antarctic Treaty was signed in 1959 and says that no country can lay claim to Antarctica and there is not allowed to be any military buildup or show of force. Militaries can only be used for logistical support (i.e. Operation Deep Freeze). The Treaty has been signed by almost every nation.
Perhaps an Arctic Treaty should be created wherein no country may claim or exercise its military north of the Arctic Circle that isn’t on actual physically-owned land. While it wouldn’t stop Russia’s buildup on Franz Josef Land or ours in Barrow AK, it would keep them and everybody else from drilling under Arctic waters.

Nice looking quarters for a company sized unit. We had a rectangular concrete block barracks that included the HQ and the mess hall. Of course they need extra space for a motor pool and probably a vodka distillery. But it’s hardly massive.

Looks oddly like the Arctic Russian base in the animated movie, Despicable Me II.

Now, there is real reason to be concerned about Russia’s actions.

How so? It’s not exactly sitting right on the border with a threatened neighbor. And there’s little reason to think it even exists. “Virtual” here means basically pretty digital pictures, and nothing more.

The whole story makes little sense. 150 men is nothing; Russia already has a far larger Arctic presence, having over three dozen large icebreakers, each with crews about that size. And on such a base, it’s hard to think of a more useless piece of military hardware than a T-72, no matter how customized it may be.

I just don’t see anything exciting in this. Certainly nothing to liven up a dull Friday.

This is nothing more than show. It is entirely useless as any kind of functioning military establishment, as a single nuke [or several conventional munitions] would simply obliterate it. It also is woefully understaffed for any serious military activity and the logistics of resupply and reinforcement are horrendous, especially in the winter. Ask anyone who has ever served at Thule Airbase [and that is located directly on the sea].

It looks pretty, but is of limited usefulness.

Did someone in Russia watch “Dr. Strangelove”and think it was a documentary?

Massive? Hardly. When I was up in Thule, we had 200 military, and that was the smallest group compared to Danes and American contractors. And all that was a small patch on the cohort that the base was designed to accommodate back in the fifties when we used to host strategic bombers and Minuteman missiles there. We knew that, if the Ruskies ever got itchy, that we’d last about ten minutes before they rolled over us. 150 guys in a facility that looks like a beached cruise ship is hardly massive. I think our satellite site on North Mountain where Raytheon built its phased-array radar installation was physically much larger. We had to take gas-powered golf carts to get from one building to another.

LOL, the Russians are just brilliant.

Honestly, the way the buildings are set it looks like a high security prison. If the prisoners get out- no fence needed. They’ll freeze to death before they get anywhere.

It’s not a military base!
It’s a ski resort.
The chair lift is on back order.

The mountain is also on back order.

The USA still has personnel at Thule Air Force base in Greenland. From what I’ve read, it’s up north (in the cold part!) and has a 10,000 foot runway, and during the cold war had thousands of people assigned to it.

tyates, we keep Thule open so the “General, it’s oh-two hundred and I’m an E-2 in Thule Greenland pumping shit out of airplanes. Exactly what do you think you can do to me?” joke doesn’t die.