The king of mean. 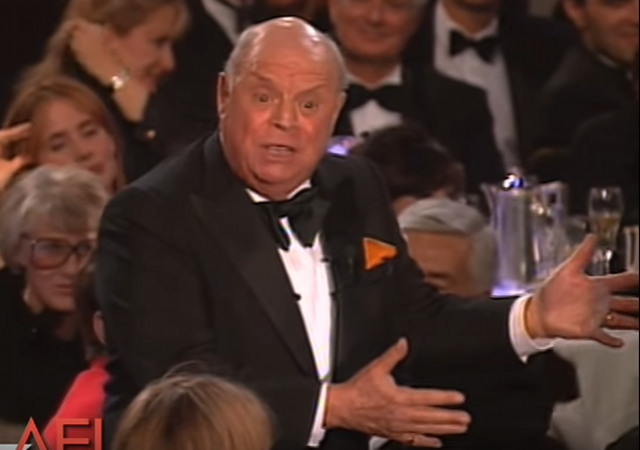 Comedian Don Rickles, who was well known for going after his audiences as well as his fellow entertainers, has passed away. He was 90 years old.

Don Rickles, Legendary Comic With a Gift for the Insult, Dies at 90

Don Rickles, the rapid-fire insult machine who for six decades earned quite a living making fun of people of all creeds and colors and everyone from poor slobs to Frank Sinatra, has died. He was 90.

Sarcastically nicknamed “Mr. Warmth,” Rickles had mock disdain for stars, major public figures and all those who paid to see him, tweaking TV audiences and Las Vegas showroom crowds with his acerbic brand of takedown comedy. A good guy and devoted husband away from the stage, Rickles the performer heartlessly laid into everyone he encountered — and they loved it.

After toiling in relative obscurity for years as a more conventional stand-up comedian, Rickles unwittingly discovered his biggest laughs came when he turned the tables on his hecklers. His career then skyrocketed after he insulted the hot-tempered Sinatra, who normally did not take kindly to such treatment.

When the superstar singer and actor walked into a Miami Beach club in 1957 where Rickles was performing, the comedian greeted the “Chairman of the Board” from the stage: “Make yourself at home, Frank. Hit somebody.” Sinatra roared — with laughter.

With Sinatra’s endorsement, Rickles began his comedic assault on people famous and not so famous — Jews, Asians, African Americans, the Irish, Puerto Ricans, red-headed women, short guys, you name it — with tremendous results.

Here’s a clip of Rickles working his magic on Martin Scorsese in 2010:

Rickles was the antithesis of the politically correct culture which has taken over much of entertainment and academia. It would amazing to see how his work was received on one of today’s college campuses.

Aw jeez. Rickles .Sweetest, funniest, legend and mensch. Came to a party at my house gave me a dollar and told me to get a nicer place.#RIP

Don Rickles has passed away.
A giant loss.

One of the funniest, ballsiest comics of all time. RIP Don Rickles. pic.twitter.com/wF9rPQjjVz

90 years with Don Rickles weren't enough. One of the sweetest and most lovely people I had the pleasure of knowing. We miss you already

Here’s a story that tell what a nice guy he was:

He will be missed.

A friend of mine called Rickles “The King of Zing”.

Only somebody you know loves you so much could insult you to your face this way and make you laugh until you cry.

Generations of people across the world will remember him as Mister Potato Head (a role that he OWNED), but to me, I will always remember him singing “Laughter For Love” after happily insulting the crowd until they roll around laughing.

To Don, who never needed to trade laughter for love, because he had them both and gave them away freely.

Those were the good days.

Rickles was among his other faults a Navy man. He played Ruby in “Run Silent, Run Deep” and he played it well.

I know what I’ll be watching this weekend.

And don’t forget Mr. Potato Head! Even in his old age, he was still great!

I would add, you can count on one hand the number of actors that have had 3 generations of real fans. (Alec Guinness and Christopher Lee are two others I can think of)

Don was what today’s supposed “Insult Comic’s” wish they could be, he could be insulting without going overboard like they do today.

RIP Don, we will remember you.

Notice how the “Politically Incorrect” things Don said to people are now considered funny. Maybe there should be a class at the Ivy League schools to teach the snowflakes how to enjoy being ridiculed.