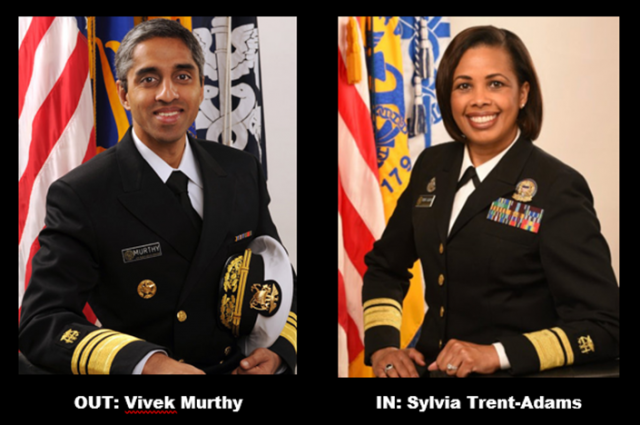 President Trump is doing a little spring cleaning, deciding to dismiss U.S. Surgeon General Dr. Vivek Murthy, who had been appointed by his predecessor.  Murthy had been asked to resign, but declined to do so according to his wife.  The president then fired him.

“Today, Dr. Murthy, the leader of the U.S. Public Health Service Commissioned Corps, was asked to resign from his duties as Surgeon General,” the Department of Health and Human Services said Friday.

Murthy was appointed by President Barack Obama in 2014 as the country’s top doctor.

HHS also said Secretary Tom Price thanked Murthy, the first Indian-American to become surgeon general, for helping the administration with its transition efforts, and that he would continue to serve on the corps.

The administration has named Rear Admiral Sylvia Trent-Adams, who was Murthy’s deputy, as acting surgeon general.

The Democrats wasted little time in criticizing the President for this move.

Murthy had nearly two years left on his four-year term as surgeon general. The news release made clear that he was asked to resign. Sen. Chris Murphy (D-Conn.) criticized the dismissal in a news release, saying that Murthy “U.S. surgeons general are not supposed to be fired midterm. They have served administrations of both political parties because keeping Americans safe and healthy isn’t a partisan issue. Dr. Murthy helped steer our country through the frightening Ebola and Zika outbreaks, and rightfully focused on the devastation of addiction.”

Murthy organized Doctors for America (which was originally Doctors for Obama). The organization was virulently anti-gun, as noted by National Review’s Timothy Wheeler, who linked to the group’s goal page:

It would be easy to see why the former president would be keen to have an Obamacare-loving anti-gun activist in one of the administration’s most public positions. However, given the policy trajectories of President Trump, there is likely to be a Surgeon General who would be a better match.

Acting Surgeon General Rear Admiral Sylvia Trent-Adams may just be a good fit. She did a stint as a nurse officer in the Army and attended college on a ROTC scholarship. Recalling that President Trump wanted to focus on helping America’s inner cities during his campaign, some of her professional experience well aligns well.

A few of Trent-Adams’ initiatives included working to improve health access for poor communities. When she served as an administrator, Trent-Adams was in charge of building systems “to improve public health for marginalized populations domestically and internationally.”

The New York Times has more on Trent-Adams:

Admiral Trent-Adams received a Ph.D. from the University of Maryland. She was a nurse officer in the Army and also served as a research nurse at the University of Maryland. She joined the Commissioned Corps of the Public Health Service in 1992 and served as the deputy associate administrator for the HIV/AIDS bureau of the Health Resources and Services Administration before joining the surgeon general’s office.

No matter who eventually ultimately occupies this position for the Trump administration, it would be hard to top Bill Clinton’s always entertaining choice for the post…Joycelyn Elders.

I believe the phrase is;…’You’re fired’.

I doubt it. Anyone who uses stock Progressive phrases in their daily work—dog-whistles like, say, “marginalized populations”—is not going to be a “good fit” in anything worth having.

The conversation between Trump and the former SG must have been epic, particularly when the SG has this level of ignorance to what little job permanence a political appointee has. (paraphrased)

Trump: You’ve served the country well for the last two years. Now I need you to submit your resignation so I can appoint a new Surgeon General.

Murthy: I’m sorry, but I have two years left to go on my appointment.

Trump: You’re fired. Get out. I’ll have the contents of your office boxed and sent to your home. Hand your keys to the Deputy SG, who is standing outside your office on the phone to one of my aides.

“You’ve done a great job, and I don’t think we could get along without you, but starting Monday, we’re gonna try.”

When the President asks you to resign, why don’t these idiots resign? Do they think they are going to stay?

Well, it just proves beyond a shadow of a doubt he has poor judgement and shouldn’t have been appointed in the first place.

“…why don’t these idiots resign?”

Because this is how the classless behave. Did you ever see Obama behave with class? It is not a community organizer character trait.

Actually, I’m not sure if political appointees are really technically ‘fired’ for purposes of unemployment insurance collection. Let me check. (Googles) Ok, I’ve got a link from DHS.
https://www.dhs.gov/sites/default/files/publications/priv-09-346-set-2.pdf

Section 8. If you resign before being requested, you’re not eligible. If you’re released by request of the administration, you may be (if you meet certain requirements)

Sen. Chris Murphy (D-Conn.) criticized the dismissal in a news release, saying that Murthy “U.S. surgeons general are not supposed to be fired midterm.
Yeah, Chris- Hillary wasn’t supposed to lose, either. That’s the way it’s done in politics…

This may be a wonderful woman, but she’s a nurse, appointed by an Obama hatchet man. I think the Surgeon General ought to be a doctor. President Trump, I’m available if you want an actual Physician to be in this role!

I’m a physician and I have no problems with the SG being a nurse. It’s a policy position, and “Surgeon-General” is a title, not a job description.

I’m a nurse and I think it should be a medical Doctor. She is a Phd, not the same, policy or not.

It is traditionally a doctor, but it did say that she served as a nurse officer for a time. And I think you know better than most that it’s always the nurses who really run things!

Appointed by the closet-transvestite-in-Chief, this woman is probably no more qualified to be surgeon general than she is a rear admiral.

That’s why she’s the “interim” Surgeon General; to keep the store open until Trump appoints a replacement.

There’s also a distinct possibility she *will* be the replacement, or at least by putting her in the position for a month or two and seeing how she does, Trump can get a sense of how she might perform on a long-term basis or even in a different appointee position.

There’s no better way to tell how somebody will do in a job than to let them do it for a few months.

What does the Surgeon General actually do, anyway? Put warnings on cigarette packages?

Good choice. You don’t have to be a lawyer to be a Supreme Court Justice either. Maybe we should try one?